Welcome to Whynot, North Carolina, population 3,872. It has one stoplight, one bar, and the one-and-only Trixie Mancinkus.

Eleven years ago, Trixie graduated Harvard Law, turned down a job offer from one of the most prestigious law firms in Boston, and headed home to Whynot to open her own firm. Not only did she leave behind the big city, but she also left her boyfriend of three years. And just so we’re clear… that would be me.
So what am I doing in Whynot at this very moment? It seems Trixie needs help with a legal case and for some insane reason, she called on me for assistance. I’ve been in town for five minutes, and I’m every bit as out of place as I feel. Trixie is all sweet, southern curves to my tailored suits and high-priced haircuts. It’s a culture clash of north versus south and about the only thing we have in common is our physical attraction to each other.
But I have a new motto since coming to Whynot: When life hands you lemons, all you need is a little sex and sweet tea to make things better.

Suddenly, my pole jerks in my hands, and I instinctively snap the tip upward into the air. I feel something catch as the pole bends in an extreme arc.

“Holy shit,” I exclaim as I sit up straighter in the boat.

“That’s a big one,” Pap says, and Trixie laughs with delight. “Now… keep the rod up and reel it in.”

I plant my feet hard on the bottom of the boat and crank my catch in. My heart is racing because I don’t know what’s on the other end of the line, but it feels massive. I reel and reel and reel, watching as the end of the line in the water comes closer to the boat. I see a flash of grayish-brown thrash at the top of the water before the fish dives back down deep, but I keep cranking that spinner.

Pap sets his pole aside, grabs a net, and leans forward, balancing himself with a hand on the edge of the boat. I give another mighty heave on the spinner’s handle, and the fish comes to the surface.

“Oh, my God,” Trixie practically shrieks with excitement as her feet come off the edge of the boat. She leans closer to me. “He caught Ol’ Mud. I was knee high to a grasshopper the last time someone managed that.”

Pap grunts in acknowledgment, scooping the net into the water under my catch. He proceeds to pull it up, and in it is the biggest, ugliest fish I’ve ever seen in my life. Not that I’ve seen many up close and personal. I mean, I went snorkeling in the Cayman’s once, but those were all brightly colored fish with long, flowing tails. This thing is indeed the color of mud, with enormous eyes that seem to be rolling and long whiskers sticking out from around its mouth.

“What the hell is that thing?” I ask in horror.

“That’s a flathead catfish,” Pap says as he hauls him in and carefully maneuvers him out of the net with practiced efficiency. He pulls the hook out of the corner of the fish’s mouth and then holds him up for me to see.

The fish is massive and thrashes in Pap’s hands, but he grips him firmly before pushing him my way. “Want to hold him?”

Trixie snickers behind me. “Oh, God… ain’t he precious?”

Pap snorts but doesn’t give me too much shit. “Suit yourself. Take a picture, Trixie.”

I turn in my seat and watch Trixie pull her phone from her pocket. Pap scoots closer to me and holds the damn fish up over my shoulder—which, in addition to fish, smells like mud too—and chuckles, “Smile for the camera, city boy.”

Trixie holds the phone out, grinning as she takes a picture of Pap and me as he holds that slimy, nasty-looking catfish. I know my manhood took a bit of a ding with my refusal to hold it, and I can’t say I’m thrilled that Trixie thinks I’m precious, but screw it… not going to apologize for my failure to bond with that smelly thing.

To my amazement, Pap leans over the side of the boat and slides it gently into the water while murmuring, “Until we meet again, Ol’ Mud.”

“You let it go?” I ask incredulously. While the thing was scary looking as all get out, I’ve eaten catfish before and it’s delicious. I have also witnessed Catherine’s cooking firsthand, and I bet she’d do heavenly things to that fish. Besides… I thought that’s what you did in the south. You hunted shit and you ate it.

“Ol’ Mud’s been in this lake for years,” Trixie says by way of explanation. “He’s rarely been caught, but we always release him. He’s like an icon around here. The fact that you caught him, and in the morning, is amazing.”

“Really?” I ask, a small pattering of pride thumping in my chest.

“Flathead’s normally sleep during the day, usually down under lake debris,” Pap explains. “They’re easiest to catch at night, but I don’t think Ol’ Mud’s ever been caught in daylight hours, right, Trix?”

“Right, Pap,” she says and then winks at me. “We might turn you into a southern boy yet, Ry.” 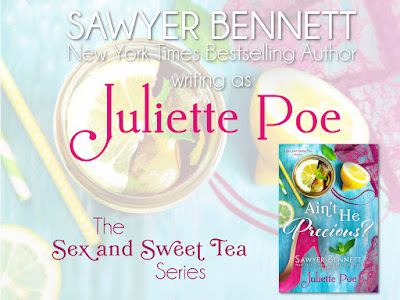 A fun-loving southern girl, Juliette knows the allure of sweet tea, small towns, and long summer nights, that some of the best dates end sitting on the front porch swing, and that family is top priority. She brings love in the south to life in her debut series, Sex & Sweet Tea.

When Juliette isn’t delivering the sweetest kind of romance, she’s teaching her southern belle daughter the fine art of fishing, the importance of wearing Chucks, and the endless possibilities of a vivid imagination.