#BlogTour: The Criminal and the Beautiful by Rose Fallen 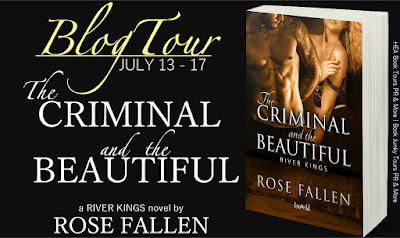 
Disclosure of Material Connection:  I received this book for review from HEA Book Tours, Book Junky Tours, and the author.  I was not compensated nor was I required to write a positive review.  The opinions I have expressed are my own.  I am posting this in accordance with the Federal Trade Commission's 16 CFR, Part 255:  "Guides Concerning the Use of Endorsements and Testimonials in Advertising". 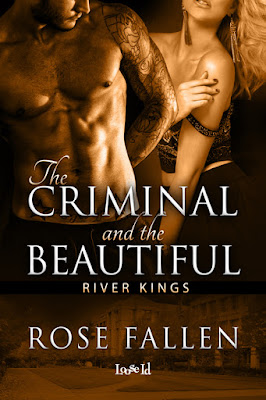 A Brazilian-Romany gypsy and a paroled ex-con, formerly part of a vicious street gang, Hanzi wants a new life but he can't escape his past. His old gang's leader and his friends don't understand why he wants to distance himself from them. The more he does, the less they trust him--and living with his sister and her cop husband doesn't help. The last thing he needs is some jumped-up snot of a rich college girl with a hard-on for literature hanging around the coffee-shop where he works tempting him with her pretty eyes and hot little body.

Usually a good student, Riley flunks a research project when family problems distract her. She has no choice but to stay on campus during spring break to redo the work. With her own family's criminal past, she has no patience with the hot tattooed ex-con who works at the coffee shop where she likes to study--and less for her own attraction to him.

They can't stand each other, but they can't fight the pull, either. Despite a disastrous first date, Hanzi finds himself wanting more than smoking hot sex from the pretty little rich girl; Riley just wants him. Too bad her dad's dead set against Hanzi and keeps asking him to do some pretty shady favors. Is he trying to trick Hanzi back into his criminal life or just take advantage of his skills? Then his old friends come after him, and being a good man starts to seem like more trouble that it's worth, especially if it won't help him protect Riley. 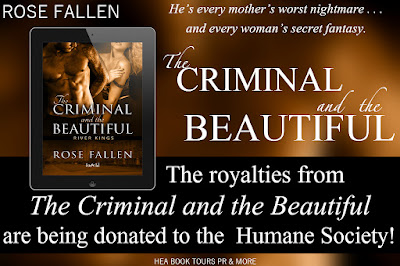 ★★ The royalties will be donated to the Humane Society ★★

Riley is a college student who has her routine interrupted.  Hanzi is there to help her out with some of her research.  These two characters are polar opposites of each other.  Brings to mind how “opposites attract”.  They both have things in their life that they cannot change.

There were times that I felt the scenes were a little slow but the author is showing the reader the type of life Hanzi has and consumes a lot of the story.  I did love that he isn’t a man without faults and he’s trying not to go back to his old bad habits.  As you read, you can’t help but think about all the graffiti that’s around – I always thought of my town as small and not touched by that kind of thing (I’m not talking about the beautiful pieces that can be seen).  But this is no longer true.

Gangs and violence – you never think it will touch your life but in this current world we live in you can’t think that any more.  Violence may not be at your door but close by.  What we tend to forget is there are those who wants to change their life and finding that special person who will love them past mistakes and all.  We also cannot always judge a person just on looks – you have to learn to trust your instincts.  You’ve got to attempt to get to know someone before you rush to judgment.

There’s suspense, action, and the fight to be a better person.  It wasn’t an easy read, and it did take me a while to get through the story.  There were times that some of the scenes seemed to move slowly but I wanted to give the book a chance.  Working in an academic setting I did find the premise interesting.  There was violence against a woman which can be tough for some readers.  And there is a sex scene in a library (just so happens that’s where I work).  The author gives her readers an ending that will have you smiling.  This is one of those books where some will love it and some will hate it.  But in the end, only you can decide if you want to give this book a chance. 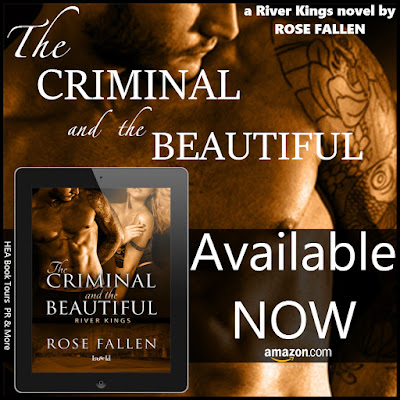 Riley flung her purse on her bed and went over to her desk.  She sat down and opened her laptop. Hanzi groaned. So she was serious about working on her project. He’d hoped she’d been playing hard to get. Playing hard to fuck.
“Guess I’ll sit down,” he said.
Riley murmured, “Okay.”
He flopped himself down on her comfy bed. A little small for his size, but he could fuck Riley in it easy. He’d fuck her wherever he could. When was the last time he’d been on a girl’s soft bed and hadn’t been fucking her? He couldn’t remember. Shit, maybe never. It was kind of nice for a
change to sit there watching her work.
Kind of. Because he really wanted to fuck her, like right now.

Riley’s small hands pecked away on her laptop keys. Hanzi leaned back into her pillows against the headboard and tried to relax. The bed smelled spicy like her, and he thought of the way her pussy tasted, and its soft, warm smoothness. His eyelids started to flutter, and then he forced them to stay open.

Across from him Riley turned to pick up her pen from the floor where it had fallen from her desk, and her silky blouse hung low on her soft, ripe tits. When she faced front again to get her work done or whatever the hell she was doing, her shirt rode up her back, and Hanzi got a peek of the creamy tops of her ass cheeks.

He motioned to her. “Riley.”
“Not now.” Her pretty little head didn’t so much as turn his way.

“Hey,” he said.
She held up her delicate finger.
Fuck that. Hanzi wanted her over there with him right now.  Enough with the playing-hard-to-get shit.

Hanzi stood up and walked behind her. He dangled his arms around her neck. “Come, leave these gangsters for this one.” He indicated her screen with his eyes. Then he worked his way under her wide neckline and set his hands on her bare shoulders, pressing his fingers hard into her supple
flesh.
Finally, she peered up at him through her thick, dark lashes. It took a lot to distract this girl. “You said you understood I have to work. You promised you’d—”

Hanzi covered her mouth with his hand.

Rose Fallen has written and published stories in a multitude of genres, but her main passion are stories that combine her two favorite genres: erotic romance and crime. Rose’s characters and their gritty romances are often inspired by the people and places in the New York City of her childhood and the music club she grew up around. She enjoys writing stories where the underdogs of society--and the women they love--triumph in unexpected ways and the characters are sometimes on the wrong side of the law. The Criminal and the Beautiful is the first book in her New Adult crime-romance series, River Kings. She enjoys reality television, tabloid news, classic literature, and hugging dogs.