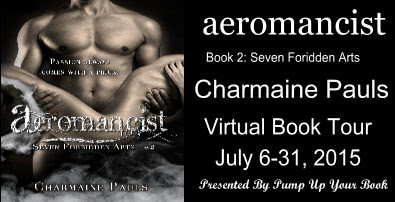 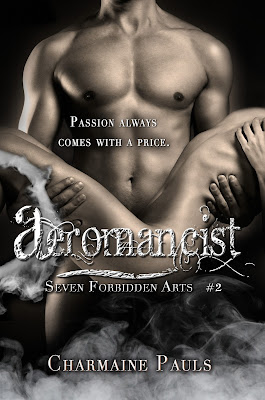 Passion always comes with a price.

All he could offer was thirty days of passion.

He condemned her to a terrible fate instead.

Now he’ll do everything in his power to save her.

He is known as the Weatherman. Lann Dréan is the last of his kind. A price on his head, chased for a power he should not possess, he can’t promise any woman forever. All he can offer Katherine White is thirty days of passion. But his uncontainable desire comes with an unforeseen price. Lann’s lust will cost Kat everything. Now he’ll do anything to save her from the fate he has brought upon her.

Discuss this book in our PUYB Virtual Book Club at Goodreads by clicking: https://www.goodreads.com/topic/show/12081444-aeromancist-by-charmaine-pauls

Katherine White has to deliver some interesting news to Lann Drean.  It doesn’t take me long to realize how jealous I am of the author – I realize that I will never be as creative as our author is.  But I’m also lucky because I had a chance to read this great book.  You will want to get comfortable because you will find yourself getting lost in the story.  You’ll not realize how many pages have gone by until you come up for air.  A perk of this book is that it was part of the paranormal genre – the sky’s the limit and the author can be so much more creative.

Our author has done a great job at creating Lann’s character because she gives him some real emotions that at times he tries to hide.  He can be a real jerk sometimes and has a hard time understanding women.  Kat is a woman who accepts her fate but that doesn’t stop her from trying to fight the inevitable.  And she won’t put up with any of his alpha male attitude.

It caught my attention right away and if I wanted to know the ending I was going to have to continue to read.  Over the years, I’ve learned that I miss out on an awful lot if I skip – which used to be a very bad habit of mine when I wanted to know the ending before I even read the first word.  Now I look forward to reading a book from beginning to end so that I can be surprised to see how the author handles the ending.

One downside was that Kat meets a couple that had me wishing that I had started with the first book.  Another downside was that I also missed out on the prequel to this book.  But the good news is that I can always go back and read them.  You won’t need to have to have read them in order to enjoy this story but it is a way to get to know the characters better.

Enter To Win Throughout The Tour!
The prizes include:
a set of 5 antiqued silver bookmarks,
a paperback copy of Aeromancist
and eBooks of the preceding books in the series:
Loving the Enemy, Pyromancist, and Aeromancist, The Beginning

a Rafflecopter giveaway
About The Author: 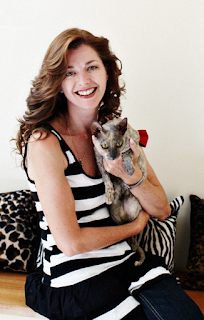 Charmaine Pauls was born in Bloemfontein, South Africa. She obtained a degree in Communication at the University of Potchestroom, and followed a diverse career path in journalism, public relations, advertising, communications, photography, graphic design, and brand marketing. Her writing has always been an integral part of her professions.

After relocating to France with her French husband, she fulfilled her passion to write creatively full-time. Charmaine has published six novels since 2011, as well as several short stories and articles.

When she is not writing, she likes to travel, read, and rescue cats. Charmaine currently lives in Chile with her husband and children. Their household is a linguistic mélange of Afrikaans, English, French and Spanish.