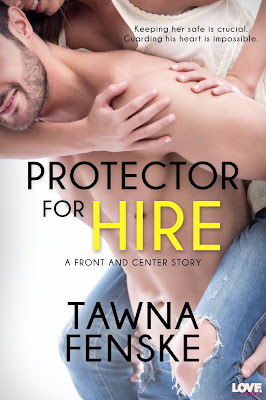 Haunted by his time in Iraq, former soldier Schwartz Patton goes off the grid, retreating deep into Montana’s untamed wilderness. Now, ten years into his self-imposed solitude, his brother tracks him down and asks for a favor. A woman is in danger, and she needs help...and Schwartz is the only one who can protect her.

Designer-loving city girls like Janelle Keebler don't belong in the wilderness. Unless, of course, they're witnesses to a murder by their psycho drug-trafficking ex-husbands. Still, Janelle can't help the immediate physical response she has to her sexy-as-sin protector that leaves her wanting more than she could have ever imagined. Even if he does make terrible coffee...

Every word, every touch, every kiss ignites a need Schwartz thought he’d lost forever. He can't stop the desperate attraction simmering between him and Janelle, even if he wanted to. Even if it means it could get them both killed.

Janelle Keebler is in need of Schwartz’s help.  I loved her first impressions of what he looks like.  I also love where he introduces himself and I’ll let you discover that for yourself.  I hadn’t even finished chapter one when I realized that the author has caught my attention and I’m not taking my eyes off the book for even a second – hopefully there’s no natural disaster in the near future.

By chapter two she had me laughing – natural disaster, bring it on ‘cause I’m definitely not leaving now.  The reader gets comedy, innuendo, sexual tension, and jealousy – yes, the author makes you jealous and wanting to be in Janelle’s shoes.  Either that or go out and find your own sexy protector.

If you love a good military read then you might want to check this out.  Hopefully you’ve read the other books in this series but you don’t have to read them in order to enjoy this book.  My only warning is that if you’re someone that goes to bed early, you may want to start this book early in the day so you can get it finished before you turn the lights out.  If you like to read after you’ve gone to bed, expect to read to the wee hours of the morning.  The ending?  It’s very sexy and one you will enjoy.

EXCERPT:
Janelle glanced out the window again. A funny-looking black-and-white bird was picking at the remains of a box of french fries squashed into the asphalt. A woman in chaps walked bow-legged from a horse trailer at the gas pumps toward the front of a convenience store, a gust of snow dust swirling around her boots. Next to the bus sat a pickup truck so ancient, it had five colors of paint on its rusty hood. There was a man in dark sunglasses motionless behind the wheel.
Janelle stared. The driver stirred, then opened the door. A leg the size of a tree trunk swung out, followed by another, and Janelle felt her heart surge throbbing into her throat. There was nowhere for her to run. Nowhere to hide if Jacques and his men came looking and—
The man slammed the door of the pickup and stared up at the bus, a permanent scowl etched into his clean-shaven face. As he tugged off his sunglasses, Janelle felt her heart skid back to a normal rhythm. Well, mostly normal.
The guy was huge. The guy was terrifying.
The guy was Schwartz.
The photos she’d seen of him were nearly a decade old, but she would have known those eyes anywhere. The clear gray-brown hue, their haunted depths, the deep fan of lines spread out from each corner.
But as much as she fixated on his eyes, she had to admit the rest of the package was pretty fine to admire as well. He was scary-big like his brothers, but well put together with broad shoulders and a chest that looked like he might be wearing armor plates under his faded flannel shirt. He had a slim waist and well-worn jeans that strained a bit over his—
“Ahem.” The bus driver cleared his throat. “You getting off, miss?”
I will be if I keep staring at that guy’s crotch. 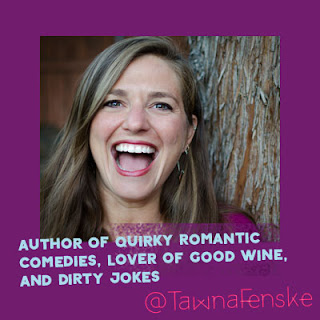 Tawna Fenske is a romantic comedy author who writes humorous fiction, risqué romance, and heartwarming love stories with a quirky twist. Her offbeat brand of romance has been praised by Booklist as “A tame Carl Hiaasen on cupid juice,” and RT Book Reviews nominated her debut novel for contemporary romance of the year. Tawna is a fourth generation Oregonian who can peel a banana with her toes and who loses an average of 20 pairs of eyeglasses per year. She lives in Bend, Oregon with her husband, step kids, and a menagerie of ill-behaved pets.