Ladies and Gentlemen. Finally. A year late, KNOTS is just about ready for all of the people who have been waiting patiently. And I thank you for your time and patience!

Starting today, CLUB IMPERIAL BOX SET, containing Consensual and Broken Bonds, will be available for pre-order for just $0.99 until August 1st. So if you haven't met Emmy and Nathaniel yet, here's your chance. Meet the couple where it all started!

So, now. Without further ado-- The Cover for KNOTS: Club Imperial 4 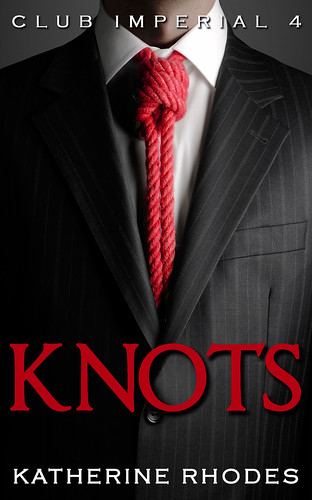 Kinbaku-bi --'the beauty of tight binding'.
Dusty Rose is well versed in the beauty of kinbaku. Trained in Japan a rope artist, there is nothing more she enjoys than the feel of the silk rope running through her fingers as she binds her willing partners in the intricate patterns of her art. Dusty loses herself there, pretending her real life as Cece Robbe doesnít exist.
Dr. Killian McInnis has had a rough year, after saving his friend Nathaniel's life. He doggedly tried to avoid his problems by going back to the life he thought he could live without: being a Dom. It seems to be the only way to escape the social darling his family expects him to marry.
As desperate as their families are to keep Cece and Killian apart, they only succeed in driving them together. Unrequited desire hangs in the air between them, and they cling to each other desperately trying to find a way out togetherÖ
Ösometimes, the knots we tie are our own.

Kinbaku is a Japanese style of bondage which involves tying up the bottom using simple yet visually intricate patterns. The aesthetic arrangement of ropes and knots on the modelís body emphasizes characteristics like sensuality, vulnerability--and strength.

**COTENT WARNING: This story contains adult language, sexual situations.
It is intended for adult audience 18+ ONLY**

Thank you for stopping by! There is contest running on my facebook page!
Please, stop by and enter to win a $10 Amazon Gift Card!
Details at www.facebook.com/katherinerhodesauthor
and at http://twitter.com/mistress_kayr
Posted by Lynn's Romance Enthusiasm at 10:01 PM