Dawn Freeze had a huge crush on Hawk Rain for years, and the entire town knows it. It's understandable-- the man is total hotness. That tall, lean body. Intense dark eyes. And always one foot out the door. Now he's on leave for exactly one week. And this time, he's made it crystal clear that he only wants one thing. Her.
Hawk's been fighting his attraction to Dawn for as long as he can remember. She's his best friend's little sister, and that means hands-off. Except now she's all grown up, and her sweet sexiness is exactly what he craves. But just as Hawk allows himself one mindblowingly intense night with Dawn, he learns that everyone he loves is in danger. Especially her.

And the only way to protect Dawn is to push her away... 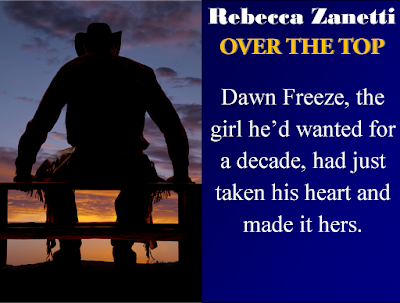 Hawk Rain is visiting with his friend Colton Freeze.  If you’ve not read Colton’s story, please check out book three titled Rising Assets.  Dawn is Colt’s little sister and she’s a woman who knows how to stick up for herself.  Expect a lot of heat with this book and this author certainly knows how to turn it up on high.  But for me this was a bad thing since it’s summertime where I live, currently going through the three “H’s”, plus the fan is on full blast – which doesn’t do anything to cool me, or the book, down.

Hawk is a total alpha male but Dawn’s no submissive.  She also has his number and won’t take any B.S. from him and then turns it back around on him.  The author also includes some scene-stealers ~ they will have you laughing.  Her friends and sister-in-law are a close second.  They are also a great incentive to go back and read the other books in the series, if you haven’t already.

One thing I loved about this book was that there was a quote at the beginning of each chapter – so make sure you don’t skip these.  And if the heat’s not enough for you, the author turns it up a notch by adding in some adventure and suspense.  This is a great way to see what Hawk’s made of.  You’ll realize when you get there because at that point you’ll not want to put the book down.  And if that’s still not enough, the only thing I’ll tell you about the ending is that it will leave you with a smile on your face. 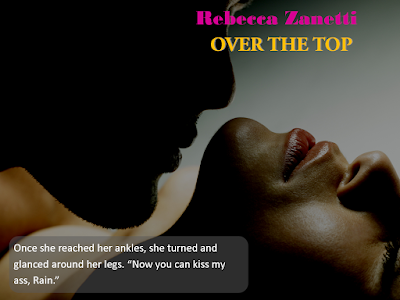 “Yoo-hoo,” a cheery voice chirped as the kitchen door opened.
Hawk dropped Dawn to her feet and whirled around, reaching for the knife he’d forgotten to place at his hip. His gun was on the nightstand, damn it. His heart thundered, and the room narrowed into sharp focus as he moved to defend.
“Hawk,” Dawn hissed, shoving at his back. “Relax.” Her voice was low and throaty, and so sexy a shiver dashed down his torso. “It’s Mrs. Hudson.”
Ah, shit. Hawk blinked and took in the scene, forcing his body to relax. “Hi, Mrs. H.”
Mrs. Hudson, wearing a bright purple down jacket with “Hot Mama” bedazzled across the front, led Mrs. Poppins into the room.
Mrs. Poppins sighed. “Oh my.”
Mrs. Hudson whacked Mrs. P. with a humongous purse. “Look what you did, Bernie. Just look what you did.”
Hawk cleared his throat and fought the urge to shuffle his feet. Dawn stepped up next to him, her face a blazing scarlet.
Mrs. Hudson, oddly enough, looked more regretful than righteous or judgmental. “The cow, Dawnie. Come on. Surely you understood about the cow, sweetie.”
Dawn swallowed audibly. “Yes, ma’am.”
Hawk frowned, turning from Mrs. Hudson to Dawn to Mrs. Poppins. “Is there a problem with the herd, ladies?”
Mrs. Poppins coughed. “No, young man. It’s more of a milk issue and making it too readily available.”
Mrs. Hudson sighed. “Well, that’s two down. There are still three rules we could employ. I mean, he didn’t really rescue her last night, you know? You should’ve called him before she changed the tire.” Then, catching herself up short, she peered through bright red glasses at Hawk. “Don’t you have somewhere to be today, Hawk Rains?”
When she used that voice and gave him that look, he felt eight years old again. “Actually, I do.” He had to get back to work, which meant he had to stop thinking about sweet Dawn Freeze and concentrate.

New York Times and USA Today Bestselling Author Rebecca Zanetti has worked as an art curator, Senate aide, lawyer, college professor, and a hearing examiner - only to culminate it all in stories about Alpha males and the women who claim them. She writes dark paranormals, romantic suspense, and sexy contemporary romances.