Wolf with Benefits
Series:  Pride # 8
Author:  Shelly Laurenston
Releasing:   June 30, 2015
Publisher:  Kensington
Rating:  5 Stars
Disclosure of Material Connection:  I received this book for review from Tasty Book Tours, the publisher, and the author.  I was not compensated nor was I required to write a positive review.  The opinions I have expressed are my own.  I am posting this in accordance with the Federal Trade Commission's 16 CFR, Part 255:  "Guides Concerning the Use of Endorsements and Testimonials in Advertising". 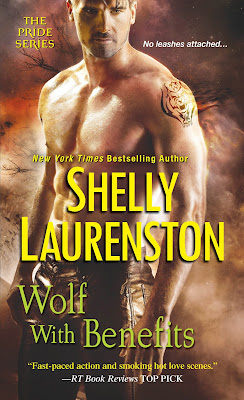 There’s nothing like a good ol’ boy wolf.  And ace security expert Ricky Lee Reed serves, protects and seduces with all the right moves…
Sure, Toni Jean-Louis Parker has to be the responsible oldest sister to a crazy-brilliant clan of jackal siblings. But now she’s cutting loose for some hot, sweaty, no-commitments fun—and the sexy, slow-talking, swift-moving predator assigned to keep her family safe is just the right thing to shapeshift her love life into overdrive. Trouble is, he’s starting to get all obsessive wolf on her every time he looks in her direction…

Getting serious about anyone isn’t in Ricky Lee Reed’s plans. Hell, even now he doesn’t really have a plan—outside of catching whoever is threatening this dangerously brilliant family. But the more he sees of Toni, the more he’s howling for her. And whatever it takes to convince her that what they have is everything, well, this wily wolf is down for the sizzling chase…

Ricky Lee Reed meets Antonella “Toni” Jean-Louise Parker in a very unusual way.  She also has some interesting siblings.  They are an interesting bunch and between them and the interactions with Ricky you are going to be laughing a lot.  The only thing is that the book doesn’t come with a warning.  So I’m just letting you know to be careful if you’re reading this book out in public unless you are very strong-willed.  I found it difficult at times not to burst out laughing.

It’s not a story to rush through and I don’t think it’s one that you want to attempt to read in one day – unless you have a way of shutting out the rest of the world.  You want to be able to enjoy each scene that our author has written for us.  If you attempt to speed read, you just may find yourself actually slowing down so that you don’t miss a thing.  Vacation read?  Maybe but only if you have no plans or you just want to sit on the beach and not do anything else but read.

This story was a reintroduction for me to this great author.  These two main characters are like the perfect comedy team – they have perfect timing when they are together.  Personally, I would have loved to be a fly on the wall while this author was penning this great book just to see her thought process.  As I stated earlier, I haven’t read this authors work in a while but I didn’t find that I had to go back and read the rest of the series in order to understand what was going on.

If you’re a fan of shifter stories, you just may enjoy this tale.  If you’re having a bad or stressful day then this book will help to take care of that – I can personally attest to that.  If you’ve seen the movie Cheaper By The Dozen but not the one done in 2003, go back and watch the original done in 1950 and I think you’ll find that this family is a perfect cast for Toni’s family.  If you stop over to the author’s web site, you just may discover your next read.

Author Info:
Originally from Long Island, New York, Shelly Laurenston has resigned herself to West Coast living, which involves healthy food, mostly sunny days, and lots of guys not wearing shirts when they really should. Shelly is also the New York Times bestselling author G.A. Aiken, creator of the Dragon Kin series. For more info about Shelly’s books go to www.shellylaurenston.com. Or to check out G.A.’s dangerously and arrogantly sexy dragons go to www.gaaiken.com