Some doors were never meant to be opened…

I made a fateful mistake. I should never have peeked behind the doors into his forbidden world.

But I did, and now I’m a prisoner. Trapped by the man I thought I loved. The man I once foolishly trusted. The man who, despite his lies and deception, I continue to crave.

He can melt my resolve with one rough, whispered demand, and I feel myself giving in to the desire he still stirs inside me. And yet, if I want to survive, I must find a way to escape. Because if I don’t, I’m afraid I’ll be consumed by a shadowy world that will ultimately destroy me.

Lost forever in his wicked House of Sin…

Natalie James is confused.  Then it goes from confusion to “what the…”  She also lets us know that some things have been solved but now there are other things going on that will have you wondering what this author has in store for her characters.  Luciano “Luc” Salvatici is angry and frustrated.  He’s still something of an enigma but he seems a little more human here.  At times he even seemed a little vulnerable.  There are some new secondary characters.  They have connections to Luc and he’s a little more forthcoming to Natalie about them.  It didn’t take long to realize that I was hooked – line and sinker.

It was interesting to watch the light bulb above Luc’s head finally go on.  But my questions become, “will it stay on?”  Maybe dim a little?  How will Natalie handle things?  If you like a book with a lot of emotion, the author has done a great job here.  You can feel Natalie’s hatred, maybe even anger, coming right off the page.  And we all know what the opposite of that is.

You can’t start this series here.  It’s not one where you can skip around.  In order to understand how Luc and Natalie got where they are here, you have to read the series in order.  I have to say that I liked this one just a little bit more than the first one because some things come to light.  I could almost see where the author is taking us – sounds good right, and if you believe that one…  She likes to tease – by the way, she’s very good at it.  My mind starts to go in the direction I think she wants me to go in and then I’m off in a different direction.  This becomes more evident as I get closer to the ending.  That’s not a bad thing because that’s what has me continually turning the page.  Maybe I’ll have to let the author know that I have vertigo issues when I change direction too quickly.  But then I won’t have to because she stopped me dead in my tracks – I’m left hanging on a ledge until the next book comes out. 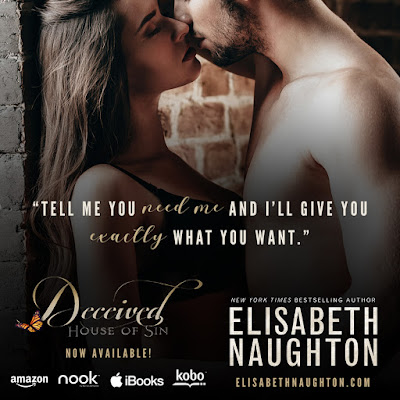 Footsteps sounded outside my door. My wide-eyed gaze shot in that direction, and my pulse went stratospheric. The door pushed inward. Then I saw Luc leaning against the doorjamb, his muscular body draped in faded jeans and a loose black T-shirt, his dark hair mussed as if he’d run his hands through it several times, his unique gray eyes as stormy and intimidating as ever.
My heart bumped, and a familiar warmth spread through my chest when I remembered this was my Luc. The man who’d taken control of my body and awakened my heart with just one touch. The man who’d rearranged every one of my priorities. The man who’d saved my life on more than one occasion.
But just as quickly I remembered that he was also the man whose family was involved in multiple illicit activities throughout Europe, from drug trafficking, to prostitution, to even, and most horrifyingly, the creation of beta slaves—women whose sole purpose was to serve the depraved needs of the men in his House. And, I remembered, he was also the man who’d followed me to Idaho after I’d run from him, who’d drugged me and, now obviously, abducted me.
Everything inside me hardened like ice.
His eyes locked on mine, but they weren’t the warm, familiar eyes I remembered from our steamy time together in Italy. No, the second his gaze met mine, his stormy eyes flattened in a way that told me he was not, and never had been, the man I’d foolishly let myself fall in love with.
“You’re finally awake,” he said in his clipped Italian accent. “That’s good because we have a lot to talk about, wife.”
For a heartbeat, I didn’t move. Then that word—wife—hit me like a two-by-four to the forehead, and my gaze dropped to his left hand, resting against his hip. A thick black band encircled his ring finger.
Sickness shot up my throat, and my fingers curled into the stucco at my back. “No,” I managed in a shaky voice. “You didn’t.”
But even before the words were out of my mouth, visions flickered in my mind again. Visions of the man in the black suit telling me all that was left was the paperwork. And then Luc whispering I’d done well while he wrapped his thick arm around my waist to hold me up and drew my fingers toward a crisp white paper where he urged me to sloppily sign my name next to his.
“I didn’t.” Luc’s square jaw turned to a slice of steel beneath the scruff on his skin as he straightened from the doorjamb. “We did. And I suggest you get used to it, Mrs. Salvatici, because we’re not leaving here until you do.”
Panic turned to a rage I couldn’t control, coloring everything red. He thought he could drug me, kidnap me, force me into a marriage I didn’t want, and that I’d just get used to it?
No.
Hell no.
My gaze shifted to the sliding glass door at my side. And seeing my one chance for freedom, I didn’t even hesitate to reach for it.
“Natalie,” he warned in a hard voice at my back, “I wouldn’t step out that door if I were you.”
“Fuck you, Luc.” I shoved the door open and moved out into the warm tropical air.
And then I ran, exactly as I should have done the moment I met Luciano Salvatici. 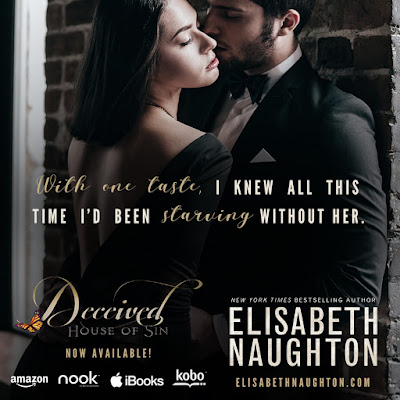 He is temptation. Forbidden fruit. A craving I can’t seem to resist.

I went after him in search of answers, certain he had blood on his hands. Now I’ve fallen prey to his seductive looks and commanding charisma.

I know he is a threat. He’s entwined in a dangerous world I don’t understand. But that doesn’t stop me from aching for his touch, for the taste of his wicked lips.

Before I can truly surrender to the fire smoldering between us, I need to know more. I have to see behind the doors he keeps firmly locked.

This book is very sexy, very dark, and very addictive! Contains consensual kink and a dark and dominant hero with a dangerous secret.

Before topping multiple bestseller lists—including those of the New York Times, USA Today, and the Wall Street Journal—award winning author Elisabeth Naughton taught middle school science. A voracious reader, she soon discovered she had a knack for creating stories with a chemistry of their own. The spark turned into a flame, and Elisabeth now writes full-time.

Elisabeth has penned over thirty books and continues to write in multiple genres. Her books have been translated into numerous languages and have earned several award nominations, including three prestigious RITA® nominations from Romance Writers of America. In 2017, REPRESSED, the first book in her Deadly Secrets series, won the RITA® for best romantic suspense.

Her work has been praised by the Chicago Tribune as being filled with “deadly intrigue, high adrenaline action, and scorchingly hot passion.” Kirkus calls her “a writer talented enough at weaving a yarn to get her readers ensnared in it.” When not dreaming up new stories, Elisabeth can be found spending time with her husband and three children in their western Oregon home, wrangling two needy cats, or chasing after one very rambunctious Dalmatian.