Being granted a second chance at life and a first time at love was every man’s dream, but for Ace it came with a price.

By all rights, he should be dead. Serving ten years in prison for a crime he didn’t commit had affected him in ways he couldn’t begin to understand. He’d rolled out of the slammer and into a revenge plot that almost got him killed. By the grace of God, when he’d hit rock bottom, one person reached out a helping hand.
A beautiful redhead with a penchant for mischief took a shine to him and then disappeared, leaving behind only her number scribbled recklessly on his arm. Assuming he can make out all the numbers, he just might have a chance at something amazing.

Finally divorcing her narcissistic husband was the best choice Barbara ever made. After living under his control for seven long years, she might have gone a little wild for a minute, what with jumping the hot biker and all. None of that mattered, though, because today was the day she got herself back on track.
After being given the opportunity to excavate a small cache of fossils in a remote area, Barbara is horrified to discover she’s inadvertently led a small team of her archeology students into danger. When they stumble on a secret dumping site of a vicious serial killer, Ace, the big, handsome biker takes charge. But she may have gotten herself and her students into more danger than even he can handle.

*NOTE* Although a part of the Blind Jacks MC series, ACE OF HEARTS can be read as a STANDALONE and features a new couple!

Climbing into bed behind his lovely professor seemed different. At the clubhouse, neither of them felt particularly at home. It was clear that Barbara felt totally comfortable in her own home, though. The strange part was that Ace felt very much at home there, too.
“This is all kinds of weird for me.”
“My house must seem like a tiny doll house to you.”
“It feels more like a warm, safe nest that’s been made enticing by the addition of a beautiful and accommodating woman. I’m feeling a bit like the world’s last dodo bird or something.”
“In that case, we had better start making babies before you go extinct.”
“The last time you said something like that it triggered a little episode of self-loathing.” Pulling the blanket up around them, he murmured reassuringly, “Don’t worry, this time I have my head screwed on straight. I’m intentionally not using a condom and will be trying my best to make ugly little dodo babies with you.”
“You’re so funny.”
Ace frowned. “Why do you want to get pregnant?”
“Fertility stays relatively stable until around age thirty in women. After that, it begins to drop off slightly. Since I gave my marriage a dirt nap, I suppose I’ve been worried about missing my window.” Eyeing him with heated admiration, she continued, “You’re a big, strapping biker. You look like you could get the job done with some swimmers to spare.”
Moving closer, he grinned. “This is like a whole new side of your personality that I’ve never seen.”
Running her hand over his chest, she laughed. “It’s the neurotic and slightly panicking side.”
Jerking his chin for her to give him a kiss, he murmured, “It looks good on you.”
Rather than following his nonverbal communication, she asked softly, “So do you have baby-related secrets to share?”
Reaching out, he wrapped one arm around her and dragged her close. “Sure, but I don’t think you wanna hear them.”
“I do, so cough it up.”
Spanning her stomach with his hand, he said, “I’ve thought about how nice it would be to see my child growing inside you. You’d look really sexy with a baby bump. I’d be one of those obsessed dads who listened to your stomach and told our little princess stories so she’d get used to my voice. Since I don’t know any stories fit to tell a baby, we’d have to go to one of those fancy bookstores and buy some. Maybe we’d get one of those fancy coffees you like so much.”
Her eyes damn near sparkled. “That’s about the sweetest baby secret I ever heard.”
Looking down at his hand on her stomach, he whispered, “I’d have to be really careful, ‘cause I wouldn’t want her to be scared when she saw me for the first time.” 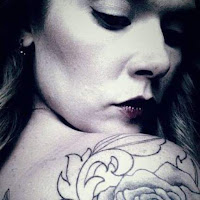 J.C. Valentine is the USA Today and International bestselling author of the Night Calls and Wayward Fighters Series and the Forbidden Trilogy. Her vivid imagination and love of words and romance had her penning her own romance stories from an early age, which, despite being poorly edited and written longhand, she forced friends and family members to read. No, she isn’t sorry.
Living in the Northwest, she has three amazing children and far too many pets. Among the many hats she wears, J.C. is an entrepreneur. Having graduated with honors, she holds a Bachelor’s in English and when she isn’t writing, you can find her editing for fellow authors.

Sign up for J.C.’s newsletter and never miss a thing! http://bit.ly/1KxXWWB