It's always amazing when Jenny Holiday releases another novel, and I couldn't have been more excited to hear that there would be another installment in her amazing 49th Floor series! I'm excited to share with you today, HIS HEART'S REVENGE, Jenny's first foray into m/m romance! I've got all of the details, including a special sneak peek excerpt, so read on and enjoy!

About HIS HEART’S REVENGE:

Twenty years ago, I was too smart and too poor to be cool. Now I’m laughing my way to the bank—the bank I’m CEO of. Nothing can touch me.

We met at summer camp. We made out under the stars. Then he stabbed me in the back.

They say revenge is a dish best served cold. But I’m gonna go with hot.

Alexander Evangelista is a millionaire with all the trappings: houses all over the world and hot guys lined up whenever he’s in need of some no-strings-attached company. He's on his way to world domination.

A CEO in his own right, Cary Bell is competing for a major client with his boyhood crush. He’s never forgiven himself for betraying Alex. But with his professional reputation on the line, he’s going to have to find his inner cutthroat if he wants his new company to succeed.

Alex isn’t about to let his nemesis steal a client out from under him. It’s time to break Cary’s company—and his heart.

Excerpt from HIS HEART'S REVENGE:

Alexander waited a beat before saying, “Your place.” He meant it about not wanting people in his space. He wasn’t making that mistake again, at least not this soon after David.

And eff him if Alexander didn’t then do exactly what Cary told him, following him around to the back of the pool. Cary tried the back gate, but it was locked. The only way

out was going to be through the house, and Cary apparently didn’t like that option because he rattled the lock in frustration. Alexander didn’t either. The party was stifling,

and they were likely to get pulled into conversations. They might have to see Liu, which would be the human equivalent of a hundred cold showers, so surely would it remind them why this was a terrible idea.

Alexander moved next to Cary to look at the gate, which was secured shut with a flimsy, rusty padlock. Cary rattled it again. “I guess we’ll have to go through—”

If they went back through the house, Alexander wouldn’t be able to continue suspending his disbelief enough to actually go through with this. So he pushed Cary aside, retracted his leg and kicked—a hard, swift blow that was rewarded with the breaking of the lock.

Cary inhaled sharply and glanced at Alexander. Alexander merely opened the gate and gestured to Cary to precede him.

They covered the large estate quickly and in silence, bypassing the valet stand outside the front door and continuing to the open field where the guests’ cars were parked. They passed Cary’s BMW first. He paused with his hand on the door and turned to look at Alexander. The heat was back in his eyes, and he was smiling a little proto-smile, like he had a secret. Alexander almost groaned right then and there as a rogue thought exploded across his consciousness. That mouth will be your undoing. Again.

“Three-fifty Kendall Avenue, main floor,” Cary said, still smiling, giving no sign that he felt any of the turmoil that was roiling around in Alexander’s chest.

Alexander nodded. It was a long drive back to the city from the Lius’ bucolic country spread. A long time to think, to come to his senses and realize why this was the worst plan in the world.

He needed to do something to prevent that from happening.

So he grabbed Cary’s wrist and pulled him against his chest. “Will you do something for me?” He was surprised at how raspy his voice was. He shouldn’t have been—it merely sounded like he felt, which was on the verge of losing control.

Cary nodded, and his cheeks flushed. Good. Finally an outward sign that Alexander had gotten to him.

“Turn off your goddamned music for the drive home.”

Cary must not have appreciated the directive, because he pulled back against Alexander’s grip.

“Why the hell do you care what I listen to in the car by myself?”

Cary raised his eyebrows, but he stopped trying to free his wrist from Alexander’s grasp.

“And what are you going to do to me?” 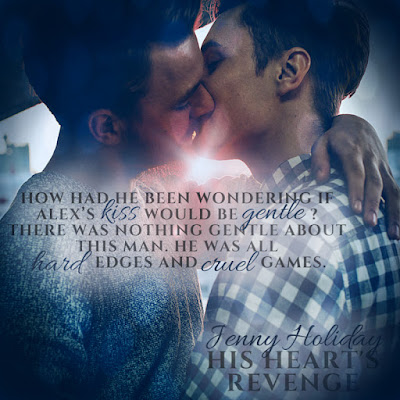 Jenny Holiday started writing at age nine when her fourth grade teacher gave her a notebook and told her to start writing stories. That first batch featured mass murderers on the loose, alien invasions, and hauntings. From then on, she was always writing, often in her diary, where she liked to decorate declarations of existential angst with nail polish teardrops. Later, she channeled her penchant for scribbling into a more useful format, picking up a PhD in geography and then working in PR. Eventually, she figured out that happy endings were more fun than alien invasions. You can follow her on twitter at @jennyholi or visit her on the web at jennyholiday.com. 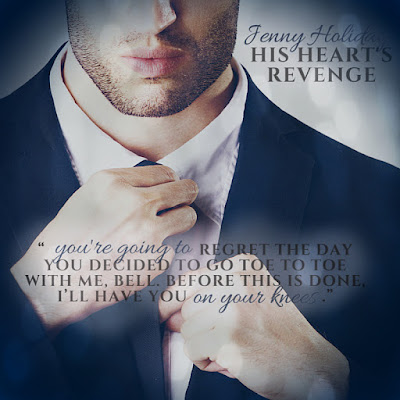