**Warning:  this book has sex in it. Lots of sex. Dirty sex. The Wicked Horse Series is a bit different than what Sawyer Bennett normally writes. While you’ll still enjoy fabulous characters, a suspenseful story, some witty banter and an epic romance, there’s just… a lot of sex. You’ve been warned.**

The Silo is an important part of this series.  So if you haven’t read any other books in the series stop, backtrack, and start with Wicked Fall.  It’s a series best enjoyed from the beginning. 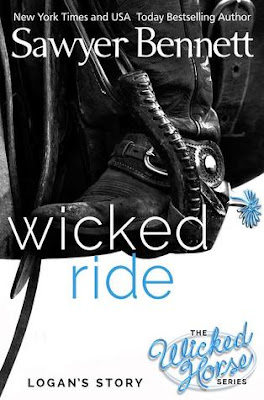 I think this woman may be the death of me. A dire prediction, but probably true.
Probably true because she’s not mine to have and I’ll probably take her, even at the risk to my own safety. So many men slobbering to get a taste of her and only one, sweet, virginal girl to go around.
That’s right.
She’s a virgin.
Looking like a porcelain china doll that would break if not handled carefully. But I also know she’s stronger than she looks.
She’s a contradiction.
She’s most likely my downfall.
Like I said, she’ll probably be the death of me, but it’s a risk I’m willing to take.

Logan McKay is a man who’s in a lot of pain.  He tries to block the pain but with no success. Auralie is a pawn in a man’s game.  The man to hate is Magnus Albright.  I can almost imagine one of the old villains in the movies that twirl the ends of his moustache.  Think sleaze and someone who would make your skin crawl.

Our main characters seem to live such a sad life but we can’t all choose what our lot in life is going to be.  But that doesn’t stop us from hoping that things will get better for them.  This is the hook used to keep us reading to the very end.  It also shows how creative this author is because we know that she won’t disappoint us.  The eyes seem to be important here and one reason is because they see and say so much.  Ours play a role because using the author’s words help us to picture each scene as it unfolds.

As I started the book, I was a little worried that I wouldn’t like it as much as the other books in the series.  Some books are worth not giving up on, this being one.  I was patient and there came that point in time where a scene caught my attention and I just sat back and enjoyed everything that Ms. Bennett wrote for me.

This is not a series for anyone who is shy about sex.  There a lot of hot scenes and for some it will push their limits but if you’re willing you won’t be disappointed.  Who doesn’t love a hero that has a mysterious past – one he does not want to share until the time is right.  Our female has a less then stellar past but when the right person comes along she is willing to change her ways.  Their ending had me smiling but I didn’t feel like this was the end for them.  The Epilogue will get you ready for Wicked Bond, which hopefully we will be able to read in a few months – I think I can make it that long.

Since the release of her debut contemporary romance novel, Off Sides, in January 2013, Sawyer Bennett has released more than 30 books and has been featured on both the USA Today and New York Times bestseller lists on multiple occasions.

Sawyer likes her Bloody Mary’s strong, her martinis dirty, and her heroes a combination of the two. When not bringing fictional romance to life, Sawyer is a chauffeur, stylist, chef, maid, and personal assistant to a very active toddler, as well as full-time servant to two adorably naughty dogs. She believes in the good of others, and that a bad day can be cured with a great work-out, cake, or a combination of the two.

http://sawyerbennett.com/signup/
SaveSave
Posted by Lynn's Romance Enthusiasm at 9:00 AM