First Look Celebration for Shannon McKenna’s
Right Through Me

NYTimes and USA Today bestselling author Shannon McKenna launches The Obsidian Files with RIGHT THROUGH ME, a pulse-pounding tale of thrilling suspense and searing passion. A beautiful fugitive and a biotech tycoon with strange powers must face the lethal rage of a vicious enemy bent on their annihilation. 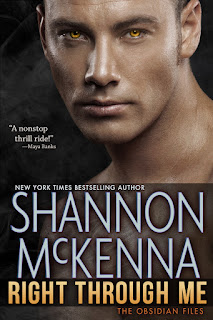 About RIGHT THROUGH ME:

Biotech tycoon Noah Gallagher has a deadly secret: his clandestine training as a super-soldier gives him abilities that go far beyond human. Yet he's very much a man. When Caro Bishop shows up at his Seattle headquarters with a dangerous secret agenda, his ordered life is thrown into chaos. Caro is a woman like no other—and her luminously sensual beauty cloaks a mystery he must solve.

Caro's lying low, evading a false charge of murder. She means to clear her name, and she'll do whatever it takes to survive—but seducing a man like Noah is more than she bargained for. His amber eyes have the strangest glow when he looks at her—she could swear he sees the secrets of her heart. The desire smoldering in Noah's eyes awakens her own secret hunger, but Caro has to resist his magnetic pull. Anyone close to her becomes a target. The only right thing to do is run, far and fast, but Caro can't outrun Noah's ferocious intensity—or deny the searing passion that explodes between them.

Nothing else matters—until a vicious enemy bent on the ultimate revenge puts his murderous plan into play. Noah and Caro must battle for their lives...and their love...

Welcome to the secret and dangerous world of The Obsidian Files!
I love stories about people forced to widen the idea of what it means to be a human being, as well as stories about what it would be like to be superhuman. Now that the technology to augment, enhance, even design human beings is becoming an accepted reality, it fascinates me even more.
My hero, charismatic biotech tycoon Noah Gallagher, has a deadly secret—he’s more than human. As a teenager, he was swept up into the Obsidian program, a plan to create super-soldiers using gene splicing and nanotech. Noah led the other modified kids in a desperate rebellion. They barely escaped with their lives and went deep underground.
Now, years later, Noah’s crew now hides in plain sight, careful to mask their uncanny abilities. All except for breakaway element Mark Olund, a psychopath who uses his abilities to enrich himself. Mark is a threat Noah’s group, so when Mark’s mistress, Caro Bishop, suddenly shows up near Noah’s Seattle headquarters working as a bellydancer, Noah’s sister decides that they need a closer look at her. Preferably one using Noah’s enhanced eyes.
But Caro has a secret, too. She’s running away from a false charge of murder. Mark Olund killed her boss, and has been hunting her relentlessly ever since. She’s the only one with the biometrics to open a safe that will unleash a terrible weapon onto the world.
This nightmare has to stop, one way or another. If no one else can help, she’ll do it herself. But in the meantime, a girl had to eat and pay her rent and bus fare. She’s been bellydancing to survive, and this gig seemed just like any other—until she set eyes on the mind-blowingly handsome recepient of her dance . . .

Caro narrowly missed slamming her hip into the table. For the third time.
Look away from the guy, for God’s sake. Get a grip. It’s just a dance.
But her gaze kept getting sucked back to Noah Gallagher, the birthday boy. Ultra-powerful CEO of the oh-so-myserious Angel Enterprises, cutting-edge biotech firm.
The man was gorgeous. Barrel chested. A dense slab of muscle. Short hair showed off the sharp planes and angles of his face, a wide, strong jaw. He wore shaded glasses, but he’d taken them off a few seconds into her bellydance, and it was incredibly hard to stay focused on the music and remember her moves while being examined with such blazing intensity. It made her lose the thread.
To say nothing of her physical balance.
Holy flipping wow. They said he was turning thirty-two today, but he seemed older, or maybe it was just his expression. Each time she twirled, she snagged a new yummy detail. The shape of his ears. Thick, straight dark brows. Sexy grooves framing a stern, sensual mouth. Sharp cheekbones. His face was a taut mask of tension. But it was his eyes that really got to her.
His scorching laser focus made her temperature rise. He looked like he’d tear you to pieces if you gave him any trouble, despite the elegant suit that sat just right on his huge shoulders. He didn’t laugh or look embarrassed like most men did when surprised by a bellydancer. He just sat there, with the charged stillness of a predator poised to spring. Radiating a subtle sense of danger.
Her smile faltered as she shimmied and spun. Suddenly, she was hyper-conscious of the erotic allure of the dance. She always tried to keep things as light hearted and playful as possible, but his silent, very male sexual energy made it feel deadly serious. As if they were alone, and she’d been summoned for a private, uninhibited performance designed to drive him crazy.
Oh my. What a stimulating scenario that would be.
She was actually getting aroused. For the love of God. Rising panic began to shred the sensation. Enough of this ridiculous crap. She had to get out of here, and fast.
Finish the dance. You need the cash. He’s only a hot guy, not a celestial being. You’re freaking yourself out. Chill. Usually she spread the wealth, bestowing flirtatious smiles on everyone, but no one made a sound. Tension was thick in the air. No laughter, no snickering, no whistles.
Who cared. Her mind was fully occupied with the task of not gaping at Noah Gallagher’s godlike hotness.
This is Caro’s first inkling that all is not exactly what it seems at Angel Enterprises. She has no idea that they know who she is, and still less that they are wondering if she is Mark Olund’s spy. But really, all she can think about is Noah.
Toughen up, cupcake. Take back the power. This was a tough crowd, maybe, but everything was relative. The people in this room weren’t trying to frame her for murder, kidnap her or kill her. And she certainly had the birthday boy’s full attention.
So she’d play with it. That man needed to be humbled. To worship at the feet of her divine awesomeness. She’d dance like she’d never danced before, blow his mind, and melt away, forever nameless. Leaving him to ache and writhe.
That’s right, big boy. Prepare to suffer.
The dance was ending. Caro sank to her knees, arching back in a pose of abandoned sensual ecstasy as the music reached its climax. Stretched before him like a sacrificial virgin on an altar.
Take me, I’m yours.
The pose felt obscene, but only because there were other people in the room. If there hadn’t been, it would have felt right. It would have felt . . . hot.
Caro rose slowly to her feet. Noah Gallagher didn’t applaud.
He just stared as if he wanted to leap over that table and pin her to the ground.
Tension built. The othe people in the room looked up, down, anywhere but at her. Caro smiled brightly. Not fair, to throw an innocent performer into the middle of someone else’s big fat faux pas and make her swim in it. Bastards.
So what. She’d stay dignified. While running for her life, fighting the powers of darkness, scrambling for money. Even if it involved putting on a scanty costume and shaking her booty for rude or indifferent strangers.
Or else one single intense, lustful, smoldering stranger.
Caro has been alone with her problems for so long. She’ll scramble to keep anyone else from getting punished by the toxic mess that is her current life, but she can’t resist Noah’s smoldering, magnetic gaze. Aside from how drop-dead hot Noah Gallagher is, she’s intensely drawn to the strength she senses in him. A strength that could withstand even problems as big as her own.
Still, all Caro dares to hope for is one secret night. That’s the extent of her self-indulgence—but Noah has other ideas . . . and he’s willing to protect what he loves . . .
I hope you enjoy the mysterious and exciting new world of the Obsidian Files as much as I loved creating it! There is still so much yet to discover, so happy reading! 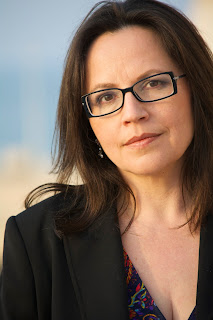 Shannon McKenna is the NYT and USA Today bestselling author of fifteen action packed, turbocharged romantic thrillers, among which are the stories of the wildly popular McCloud series. She’s also the author of the upcoming OBSIDIAN series, the first of which, RIGHT THROUGH ME, comes out in July of 2016. She loves tough and heroic alpha males, heroines with the brains and guts to match them, villains who challenge them to their utmost, adventure, scorching sensuality, and most of all, the redemptive power of true love.
Since she was small she has loved abandoning herself to the magic of a good book, and her fond childhood fantasy was that writing would be just like that, but with the added benefit of being able to take credit for the story at the end. The alchemy of writing turned out to be messier than she'd ever dreamed, but what the hell, she loves it anyway, and hopes that readers enjoy the results of her alchemical experiments. She loves to hear from her readers.