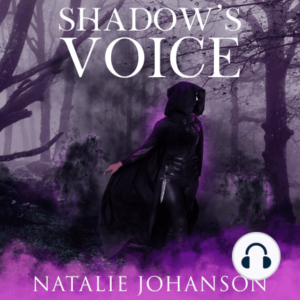 Rose Trewin is running from her past. She would run from her magic too, if she could, but her ability to move through shadows like a wraith isn’t going anywhere. She hopes for a simple life, forgotten and unknown. When a promise to take a message to the king turns deadly, Rose must decide what matters more: disappearing into the night or the fate of her country. She soon finds herself at the center of a conspiracy and political intrigue. Relying on her skills as a spy, Rose must seek out the center of the plot. However, when her magic begins to change and new, unknown creatures are emerging from the shadows, she quickly realizes more is at stake. Long dead evils are returning Forgotten magics are awakening And Rose must face her past to accept her future

Natalie studied at Westminster College with a degree in English with a Creative Writing Emphasis before deciding to go after her dream to work in law enforcement. Before that, Natalie worked as an editor on her high school literary magazine, Euphony and had several short pieces published in it. Natalie spent the better part of a decade writing, rewriting, abandoning, and fighting through Shadow's Voice. It all started with reading a book that didn't end the way she thought it should. So, Natalie went about writing a book with an ending she wanted. Thus Shadow's Voice was born. What started off as something just for Natalie to read and write in her spare time quickly became a full blown novel she wanted to share with everyone.