The last thing he wants to do is play bodyguard to the woman who broke his heart.

As the wife of a pioneer in the field of biotechnology, Katherine Stallworth had an up-close view of the ugly underbelly of corporate espionage and the cutthroat nature of competition. When her husband is murdered and her life threatened, she turns to Raheem Miller, the one man she can trust–despite their sordid past.

Years ago, Raheem fell in love with Katherine–older, sophisticated, and way out of his league. And nothing has changed. While he’d rather avoid this assignment, he’ll never forgive himself if anything happened to her. In the middle of conducting an investigation into her husband’s death, he discovers a conspiracy that could rock the very foundation of the United States.

Now he must bring the culprits to justice while keeping Katherine alive and his desire in check. Easier said than done. 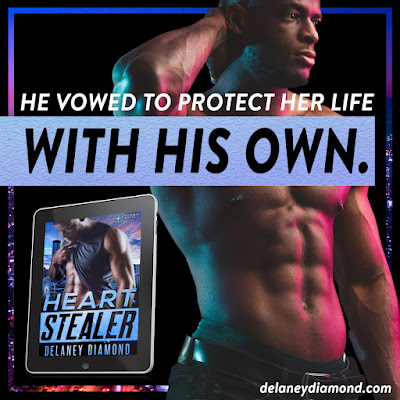 Katherine Stallworth stared in horror at the carnage before her and the foul stench of death. Nothing could have prepared her for this.

Her husband’s body lay sprawled across the duvet in the dimly lit room, his dark shirt darker from the uneven circle of blood that covered his entire chest. Dead, and so were his bodyguards.

Keith lay face down at the foot of the bed, his arm at an awkward angle, his weapon butted up against the wall as if someone had kicked it away from his hand. His suit jacket was soaked with blood, and so was the cream-colored carpet beneath him.

Ivan was on the floor, slumped with his back against the bed and his temple touching the nightstand. He would look like someone who’d fallen asleep sitting up, except half his face had been blown off and his white shirt was drenched in blood.

Katherine walked slowly over to the bed on shaky knees. Her husband’s pale skin was ashen and drained of life, his mouth open as if in the middle of a scream, and his sightless eyes staring up at the ceiling.

She lifted both hands to her mouth as tears filled her eyes and pain wrenched her heart. “Thurgood,” she whispered into her cupped palms. Who had done this, and why?

Then she heard a noise in the walk-in closet. Her heart jumped, and her mouth fell open in silent panic. She wasn’t alone. The killer was still there!

She backed away slowly, chest tight as she tried hard not to make a sound. When her foot breeched the entrance to the door, a shadowy figure dressed in black exited the closet, and she turned swiftly, rushing down the hall toward the staircase. Breathing accelerated, she gripped the wooden railing with a trembling hand and moved down the stairs as quickly and silently as she could on her toes.

These shoes! The pretty gold heels she’d worn with such pride to the reception she now cursed for their impracticality. Her pounding heart was so loud in her ears and her breathing so shallow, she wondered if the intruder could hear the evidence of her fear.

Her driver and the other bodyguard had already left for the night, but she had to get out of there. She had to get to the garage.

Halfway down the stairs, she stopped and turned.

A man stared at her from the catwalk. He wore a black ski mask over his head, with openings for his mouth and eyes—eyes that locked with hers and reeked of venom. His menacing posture and the death she’d witnessed provoked an immediate response.

Katherine took off down the stairs.

There was no way she was stopping.

Almost to the bottom, a gunshot shattered the wood railing she clutched. She screamed and, in her panic, missed her footing on the stairs. She twisted her ankle. Sharp pain jiggered up her leg, and she went down. Her hands flew out instinctively to protect her face, but she skidded along the edge of the last two steps, scraping her knees, shins, palms, and forearms.

She lost one shoe and landed in an ungainly heap at the foot of the stairs in the foyer with her evening gown crumpled around her upper thighs. Heavy footsteps pounded behind her. Too terrified to turn around, Katherine ignored the burn of the bruises and scrambled to her feet as another man appeared in the open doorway to her right.

“Get her!” the one on the staircase yelled.

She kicked off the other shoe and gathered her full skirt to keep from tripping over the hem. She limped away from them both as fast as possible, fueled solely by adrenaline as she raced into a second hallway and pushed open the door to Thurgood’s study. She slammed it closed and quickly turned the lock but knew her actions would not keep them out for long.

There was a loud boom as one of the men slammed his body against the door, which sent her scrambling across the room. She stubbed her little toe on a chair and cried out, wincing at the debilitating pain but didn’t dare stop, and hopped over to the bookcase beside her husband’s desk.

The master bedroom, where Thurgood was murdered, was also a safe room. But fortunately, there was a second safe room inside his study.

She yanked away two books hiding a plain-looking piece of metal in the wall and pressed her thumb to the silver disc. Right away, the entire shelf popped out, and she swung the door open.

The office door was kicked in at that very moment. The frame splintered and pieces of wood spewed through the air. Both men rushed in, but Katherine slipped between the shelf and the wall and yanked the door closed.

Delaney Diamond is the USA Today Bestselling Author of sensual, passionate romance novels, and was born and raised in the U.S. Virgin Islands. She reads romance novels, mysteries, thrillers, and a fair amount of nonfiction. When she’s not busy reading or writing, she’s in the kitchen trying out new recipes, dining at one of her favorite restaurants, or traveling to an interesting locale. To get sneak peeks, notices of sale prices, and find out about new releases, visit her website and join her mailing list. Enjoy free stories on her website at www.delaneydiamond.com.