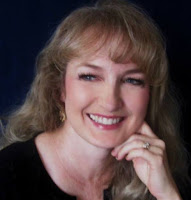 Donna Hatch is the author of the best-selling “Rogue Hearts Series,” and a winner of writing awards such as The Golden Quill and the International Digital Award.

A hopeless romantic and adventurer at heart, she discovered her writing passion at the tender age of 8 and has been listening to those voices ever since. She has become a sought-after workshop presenter, and also juggles freelance editing, multiple volunteer positions, and most of all, her six children (seven, counting her husband).

A native of Arizona who recently transplanted to the Pacific Northwest, she and her husband of over twenty years are living proof that there really is a happily ever after. 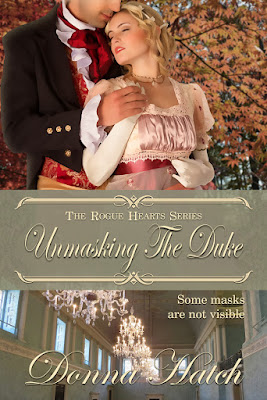 The last thing Hannah Palmer wants to do is flirt with men in a crowded ballroom, but when her sister, the Countess of Tarrington, throws a Masquerade Ball, Hannah can’t say no to the invitation.

Taking comfort behind her disguise, she dances with a charming masked gentleman, matching him wit for wit. When the glorious evening culminates in a kiss, and the two remove their masks, Hannah is horrified to discover the man
she’s been flirting with all night is her most despised neighbor, the Duke of Suttenberg.

No matter how charming the duke was at the ball, and how wonderful the kiss, he is the last man she could ever love.

Hannah turned. Cole and the duke approached, both walking as if they owned the world. Tongue-tied, Hannah nodded. The duke passed a brief glance over Hannah.
Cole made a loose gesture. “You remember my wife’s sister, Hannah Palmer, of course.”
The duke blinked. “Yes, of course. Good afternoon.” He might as well have said, “No, I’m sure we’ve never met”; it would have been truthful.
In a single graceful motion, he swept off his hat, revealing midnight hair and that distinctive patch of blond on the left side that apparently marked members of his family for generations. He appeared to be proud of the unusual birthmark judging by the way he parted his hair in the middle of it. Briefly, he dipped his chin in a ducal version of a bow when greeting someone of low consequence.
Seething at his arrogance, Hannah sank into a very proper curtsy. In an act of uncommon boldness, fueled by ire, she offered a mischievous smile. “Delighted to see you again, Your Grace. I’m happy you’ve recovered from the strawberry incident.”
There. She’d made her point without revealing any hint of annoyance that he’d failed to remember her, and she’d even spoken without stammering.
His gray-green eyes opened wider, and his head jerked back ever so slightly in
carefully controlled surprise. Was that a touch of blush on his finely chiseled cheekbones? Surely not.  The Paragon would do anything so boyish as blush.
“Strawberries. Yes. I’m careful not to give them the upper hand.” His smooth baritone voice contained exactly the right amount of humor and arrogant savoir faire.
She might have been charmed by the almost chagrined smile now curving his beautifully formed lips if she weren’t chewing on his admission that he refused to allow anyone, or anything, to best him. Not to mention that he still gave no hint of remembering her despite them meeting four times—yes, she counted.
Saucily she tossed her head. “I wish you success in your endeavors to submit all strawberries to your whim.”
The duke’s gaze flicked over her face, still showing no sign of recognition, but every sign of unconcern, although he did seem to study her more closely. “Yes, well, a pleasure to see you . . . again.” He turned away from her dismissively.
Hannah marched to the parlor. That duke! Insufferable, rude, arrogant . . . perfect people at the top of the social pyramid never seemed to have any tolerance for
mere humans, nor would they do anything as lowering as willingly engage them in a true conversation.