Today we have the cover reveal for Hayley Faiman’s Blended With Pain, book four in the Cash Bar series! Check it out and pre-order your copy today!

About Blended With Pain:

Carson is a mother who has never carried a child. She’s raised Axe as her own. He is her responsibility, but she wouldn't want her life any other way, even if it’s not exactly what she had planned.

A waitress in a small town diner. A single mother. She hides in plain sight.

Keys is a mystery to his Canadian brothers. A recent transfer from the Notorious Devils in North Dakota, and the new tech expert for the club.

His life has been one big party. No responsibilities. No relationships. No commitments.

That is, until he walks into a small diner in Texas. He recognizes her. She’s the girl from his past, and yet, she’s not--she’s all grown up. She hides a secret that once he discovers causes rage to flow through his veins.

He cannot simply let her go. He did that once--never again. Especially now that he knows the truth. He plans on keeping her as his own. 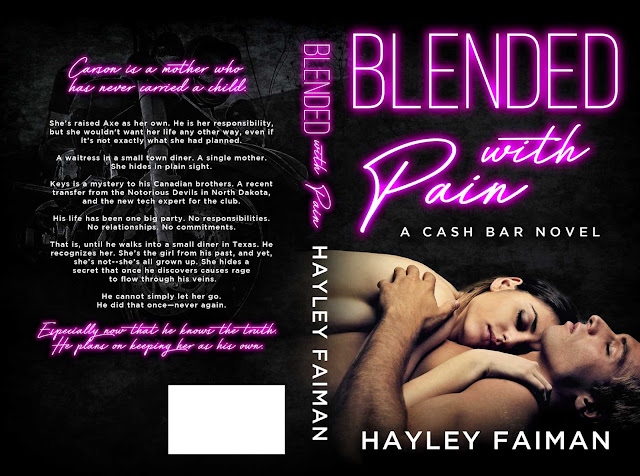 Ace looks down at me and a smirk appears on his lips. “Canada.”

I replay the word in my head, and when he attempts to walk by, I grab ahold of his ankle. “We don’t have passports, I can’t just leave for an undetermined amount of time to another country. I have a job. I have responsibilities.” I’ll never be able to pay rent without working every day, money doesn’t just magically appear in my checking account, either.

He barks out a harsh laugh, then spits on the dirt. I hold my breath when he leans over slightly. “Your job is at a diner. You owe rent, and nothing else as a responsibility,” he looks over to Roxanne and then to me. “You won’t be coming back. Pack what you want in your car. Everything else can rot.”

He walks away without a second glance back at us. I stay on the ground, my ass planted in the dirt and I cry. Roxanne sits down next to me, wrapping her arms around me and she holds me while I do. “I wish I could have helped more,” she whispers after a few minutes.

I shake my head. “It’s all my fault, he’s right, I should have told him all those years ago.”

I was born and raised in a small farming town in California. I met my husband when I was 16 and he was 19. We married four years later and have two little boys! We lived in Oregon for a few years while he served in the US Coast Guard.

Texas is now where we call home, where our boots rest, and where we’re raising our two little boys and a chocolate lab named Optimus Prime.