I received this audiobook as part of my participation in a blog tour with Audiobookworm Promotions. The tour is being sponsored by Holly Ryan. The gifting of this audiobook did not affect my opinion of it.

"Marry the devil...or die." That's the ultimatum Belle Harrison, vampire slayer, just received from a demon. Belle has only one response: To hell with him.

Turns out it's not that easy, though - apparently the devil doesn't know the meaning of the word no. Lucky for Belle, three pantie-melting vampires come to her aid. Three hot vampires she can't resist. Hey, we all have our vices. Hers just happen to have fangs.

She's going to need these three to help her thwart the devil's marriage proposal and defeat the terrifying dark force that wants her dead.

I like paranormal romances but am not fond of the term Reverse Harem. For me, the term is just a replacement for the term menage. I think part of the change is because people don't like that term. If it turns you off, I really don't think that it can be applied here. Being the first in a series, I find teaser to be more accurate.
This was my first listen for both the author and the narrator. Our author reminded me what I loved about the paranormal romance genre. When multitasking I found this was a great way to get to know both women. Ms. Ryan took me back to what I loved about the Buffy the Vampire Slayer series. Ms. Schwairy was great at telling me a good story but I could not picture her as our main female character - her voice didn't have me picturing a young woman. That didn't stop me from enjoying the book though. When she first starts the story, that I listened to a second time, I decided that I will have to go back and listen to this around Halloween. What better time to get up close and personal with the unexplained?
There were just a couple of issues. One being that the story was too short. Good news is that it just gets me ready for the second book. The other issue I had was with the audio. As Ms. Schwairy was talking I heard things that weren't a part of the storyline. A couple of times it sounded like she was in a place that had nothing to do with our slayer, our vampires, or the demon. The other audio issue was that in a couple of spots I could really hear our narrator swallow - again nothing to do with the characters. Those were things that I could overlook because she kept me interested in Ms. Ryan's tale. And I'm glad to see that I'll see more of Belle Harrison in book two - oh and let's not forget the three hunky vampires. If they need another neck mine's available. 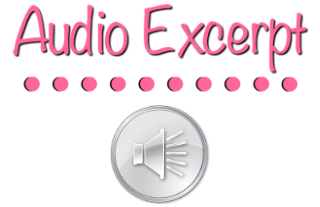 Holly Ryan is a pen name for a USA Today bestselling author who one day said, “Screw it. I’m gonna write books with some serious sizzle.” She’s fueled by wine, which is where the idea probably came from.

Melissa Schwairy is a full-time narrator vocal age 20-30 living in Denver, Colorado. She has focused her acting career on narrating literature, completing titles in YA, Urban Fantasy, Murder Mysteries, and Romance. She has a BS in Counseling and Mental Health, and she is licensed in Healthcare Administration and Nursing. She loves to sing and dance in the car, and spend time with her family at home in beautiful Colorado.