A couple's quick romance and hasty marriage is torn apart by family and fate, leaving them to face the collapse of the Soviet Union separately. Years later, old memories are stirred to give their love a second chance.

Serge and Janna's chance meeting at a Black Sea beach sparks a passionate romance and a quick marriage. Serge's parents, suspicious of Janna's motives and heritage, force him to break up with her. As the Soviet Union collapses, revealing ethnic and social pressures, each faces danger separately. Serge drowns in self-doubt, his life spiraling down and in. Janna plots a dangerous exodus to America with her mother and daughter. Years pass, stirring old emotions. Then, changing circumstances give their love a second chance. Janna Yeshanova tells a story, providing a very personal view of political and social change.

Love is Never Past Tense is part romantic drama and part a look at real people responding to life-changing events, but mostly a suspense adventure about living through one of the biggest changes in living memory. 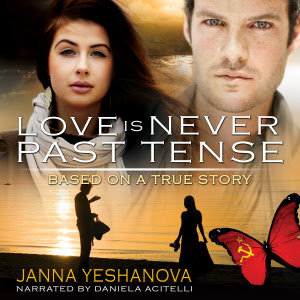 
The old man sat on the stern of the boat, lowering his thin, wiry legs into the water. They were approaching the end of their days faster than their owner: the veins that had survived the surgeries had become a bluish, knotted spider web. The old man’s feet were always cold, even during warm weather. But now the seawater, warmed by the sun, stroked them, pleasing him.


He had already been sitting like this for fifteen minutes, slowly moving the soles of his feet, every now and then dangling them over the water and then lowering them into the waves nearly lapping over the edge of the boat. It was quiet. The sun was shining high above the old man’s head, casting its heat on his shoulders and the nape of his neck. It was time to turn the boat around, but he knew that soon enough the slow waves would eliminate the need, directing his vessel so that his back would face the sun. He could have sat at the bow of the boat, but then his feet wouldn’t have reached the water. Besides, sitting like that wouldn’t have been comfortable at all. What exactly is the point of these needless actions anyway, when time inexorably draws him to an event, the sole purpose of which he had sailed here? It was supposed to happen at sunset; when the sun dips down to meet the sea’s horizon. This is what he had decided.

But now the sun was reaching its zenith, leaving him with an overabundance of time. He sat calmly, relishing his solitude...

Long ago, there was a similar boat. A young and virile man rowed confidently, deliberately moving his female satellite away from the beach and the shrill sounds of a multitude of tourists. She reclined on the boat’s stern, her long legs stretched out and her hands clasped behind her head. In this position her breasts achieved monstrous proportions. Once in a while, she bent towards the stern of the boat and lowered her palm into the water, enjoying how it streamed through her fingers. Of course, sitting on the narrow bench was not very comfortable, and she was constantly shifting positions, as if to tease him. Her breasts seemed to squeeze out of her swimsuit, evidently lacking a proper-sized container. Now and then she would adjust her top, tugging it up a bit higher, but sometimes she would forget, and the tips of her brown nipples would peek out, sending him into a frenzy. He strained at the oars, trying to exhaust his sexual energy; but, alas, his efforts were futile. As soon as they had moved far enough away from the shore, of course, he intended to move closer to her, and just let whatever was to happen, happen…

Yet she sat calmly, completely oblivious to the rower—to her, it was a pleasant ride, nothing more. Sensing this, the oarsman wondered whether they would actually return to the shore in such an inglorious fashion. He had to surprise her, or at least interest her, for heaven’s sake. But not a single word came to mind. On a schoolboy’s impulse (that’s essentially what he was, anyway), he suddenly got up and dove overboard. He wasn’t a bad swimmer and was an even better diver, able to hold his breath for a long time underwater. Even now, he effortlessly reached the bottom. It was not deep—just five or six meters. Once at the bottom, he clung to a rock and waited as long as his lungs would allow. He and his buddies from diving class had always competed to see who could stay submerged the longest. He’d won every time, usually holding out for more than three minutes…

At last, he could feel his chest tightening—he knew this was the signal to return to the surface. If you wait too long, you might not resurface, since you can momentarily lose consciousness. That’s what their diving coach taught them. No one, of course, tried to prove him wrong. He released the rock and wound his way back to the boat, now a dark silhouette hanging picturesquely in the silver sky of the water—so seems the sea surface looking up from its depths. Purposely, he carefully emerged from the water at the nose of the boat, keeping himself hidden. Occasionally, he stole a glance at his companion, whose own gaze was fixed on the dark green waters. It was evident: worry was overtaking her. Having achieved his goal, he dove back down and immediately resurfaced right in front of her face, his wide smile expressing satisfaction. But instead of petting his long, disheveled hair, she again reclined, reminding him that it was time to return the boat to the shore; the time for their boat’s rental was coming to a close. He scurried back on board and slowly started moving the oars, but the water seemed to thicken as if feeling his desire not to return to the shore.

During their first three days together, Serge (as they called our hero at the time) was the quieter of the two, once in a while muttering some insignificant phrases. The first time he saw her, he silently followed her for a long time. She walked along easily, shifting her long, rather well-proportioned legs. Her thin leather skirt swung from side to side, barely hiding her shapely hips. A green blouse tightly covered her beautifully straight back. All the while, Serge followed her like she was a vision, lacking the courage to come closer or to back away. He knew that making her acquaintance was a long shot; she was simply out of his league. How could he possibly know that she, a complete stranger, would inexplicably impact his life and be with him forever, whether she was at his side or not?

What Others Are Saying:


"The portrayal of Communist and post-1991 Russia is brilliantly done and made the story so much more than 'just' a romance." - Amazon top 500 reviewer, Christoph Fischer


Beneath the adventure and romance is a deeper story of achieving dreams regardless of obstacles. Janna Yeshanova brings forth her personal account of courage in the face of impossible odds, her indomitable spirit, and a heart of gold that held onto a lost love for decades.


"This very modern love story, lets you feel the sorrow, fear and joy of a couple coping with events that reshaped the world. A great, dramatic romance in classic Russian style." - Amazon reviewer


Originally from the former Soviet Union, Janna Yeshanova escaped in 1989 when persecution became violent during the crumbling of the Soviet state. This required getting permission to emigrate and a long dngerous train trip across central Europe with her elderly mother, her young daughter, and the $126 she was permitted to take out of the country. She did this by overcoming gridlock in Russia, animosity and graft at the border, and neglect in the west. Safely out of Soviet control, Janna and her family spent months as refugees waiting for permission to come to the United States.


Arriving in the United States knowing not a soul, Janna arrived in Ohio and began to rebuild her life. She earned a second masters Degree and was invited as a speaker at the Bosnia and Herzegovina International Peace Conference in 1996. While building her business as a Leadership Trainer and consultant, she has become a Professional Certified Coach (PCC) through the International Coach Federation. She offers life coaching services to individuals, conflict resolution to couples and groups, and soft skills training to organizations of all sizes.


Her book, Love Is Never Past Tense, offers a message of hope and inspiration, showing that nothing is impossible if you believe in yourself.