Disclosure of Material Connection:  I received this book for review from the author. I was not compensated nor was I required to write a positive review. The opinions I have expressed are my own. I am posting this in accordance with the Federal Trade Commission's 16 CFR, Part 255: "Guides Concerning the Use of Endorsements and Testimonials in Advertising".


★"Another slam dunk for me by Lisa Suzanne." - Sweet Sexy Escape

★"Lisa has mastered the Rock Star romance genre and keeps me begging for more!" – Bookworm Between the Sheets 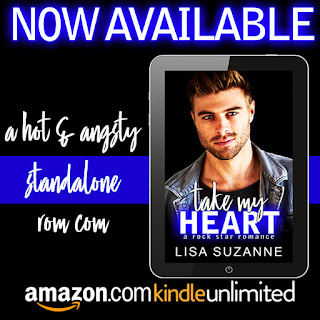 ✓ MORE ABOUT THE BOOK:


When my manager pushes me into starring on Take My Heart, a new celebrity dating show, I think she's crazy. Then she shows me the bottom line. Between the money and the exposure for my band, I can't turn it down... even though the last thing I want to find is love.


I promised the guys nothing would change, yet everything has, including the feelings I have for the one girl who is off-limits.


How can I give my heart when it's already taken?


★"This hilarious romance read was a train wreck I couldn't look away from!" -Rotella Reads

★"I couldn't put this book down." -Bangor Besties Book Blog 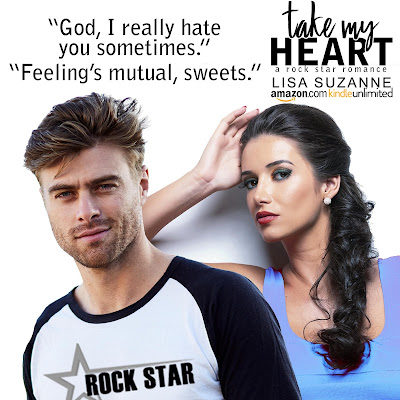 Dax Hunter isn’t happy about the position he’s been put in.  It’s all about getting ahead – which didn’t earn any brownie points with me.  He feeds into my perception that some men in his profession like to have their cake and eat it too.  But he does have a somewhat redeeming quality but since it’s for his benefit I’ll have to sit on the fence for a while, even though it might get a little cold, as I watch the story progress.  Especially when I turn around and he has me feeling sorry for him.

One disappointment I had was that I couldn’t listen to his band play as I read.  Not sure playing one of my all time favorite bands, Queen, in the background will have me thinking about MFB.  A playlist is mentioned but it’s part of a scene.  So I would say to think about what you can imagine the type of music his group might play and then create a playlist around that.

I liked how the author mashed up some reality shows to add a little spice to Dax’s life.  It gave me a few chuckle moments.  I loved seeing him squirm – doesn’t take much to make me happy.  Our author waits to get her readers involved with her reality show before she starts having him even begin to think of love or that elusive happily every after.  She stars out by including pictures and information about some of the extras.  It was a great way to get us involved – just like the television show.  Full disclosure, I hate that show – always have.  But by starting it later in the story was good for me.  If you’re of the same mind as me it may be for you too.

The author leaves us guessing as to what Dax’s present and future holds.  On the opposite end, she gives me the sense of how everything seems staged – which is what I felt about the actual show.  I liked how she didn’t give him a big personality because as you get to know him that just wouldn’t seem to fit.  You may have noticed that I didn’t mention a love interest.  In the spirit of the reality show I’m not going to mention a name.  Just like The Bachelor you will have to watch to see how things turn out after the show is over.
Posted by Lynn's Romance Enthusiasm at 9:50 PM