Today we have the blog tour for AS YOU WERE by Lee Piper! Check it out and grab your copy today!

Title: AS YOU WERE
Author: Lee Piper
Genre: Contemporary Romance

About As You Were:

They say love is beautiful.

Love is a dark, broken man with whiskey-colored eyes. Love is knowing he will never return my feelings. It is the final chord of a guitar riff as it bleeds into silence.

I convinced myself I needed him. I thought there was no one better to record my debut album with…

Encased in layers of ice, he wears his pain like a protective shield.

Wanting what I can’t have might ruin me. But so help me, I crave his destruction.

Get Your Copy Today:

“Willow.”
I swallow, then rub my thighs together. “Zeke.”
His nostrils flare.
“Is everything okay? You look—” I pause, licking my bottom lip. “—angry.”
He narrows his eyes.
What could I have possibly done to upset him? Didn’t I rock out like a fiend? Didn’t I comply with every obsessive-compulsive demand? And why, for the love of Athena, is he so freaking sexy when he’s pissed?
I need to get my head checked.
Zeke’s chest rises and falls at a frantic rate. It’s like he finished an ultra-marathon clocking a personal best time. Stepping closer, I peer into his face. The pulse at the base of his neck jumps, his jaw is tense, and those caramel irises are ablaze. The fact that he’s seconds away from losing his cool should terrify me; it should send me running in the opposite direction. But it doesn’t. Despite our argument this afternoon, despite his harsh words, the rage draws me closer—a hurricane I’m determined to chase.
On impulse, I reach out, my steady hands claiming his chest. Damn, it’s hard. Clearing my throat, I murmur, “Hey, talk to me. What’s going on?”
“You left.”
I raise a questioning eyebrow.
“One minute you were in the production room, the next you were gone. Reid didn’t know where you were. Drake didn’t have a goddamn clue. Your car was missing, and you didn’t answer your phone.” His hands clench and unclench by his sides. “You. Left.”
There is every chance I’m going to regret my next decision. In a few hours’ time I’ll likely look back on this moment and shake my head at my stupidity. But right now? Right now the fog clears and my path becomes obvious. Zeke is hurting. I’m the antidote. Simple.
I shift closer.
After sliding warm palms over his pecs, I snake them behind his neck until my fingers play with the short strands of his dark hair. His eyes widen. Then his pupils dilate when I draw him toward me. Our foreheads touch.
Zap.
Tingling energy sparks, then flares. Yet my voice is calm. “Yes, I left.”
Strong fingers clamp down on my hips. I bite back a groan.
“But I was coming back.” They dig into my skin. “I’ve signed a contract. I gave my word. I never back out on a promise.” I trace the harsh contours of his face.
He flinches but doesn’t pull away.
“Always so angry,” I murmur, caressing the strong line of his jaw. The stubble on his chin tickles my soft skin. “Why are you always so angry, Zeke?”
His nostrils flare.
Pressing my fingers against his full lips, I continue, “And I’ve never seen you smile. Why is that?”
I cup his cheek, my white skin almost translucent against his tan.
He inhales. “You need to stop touching me.”
When I cup his other cheek, our noses touch. “Can’t.”
His gaze flits between my eyes, searching. I’m transfixed, drowning in his confused indecision. Pulling back, he looks away, his Adam’s apple bobbing on a swallow. “Kinda like havin’ you around.”
Drawing his gaze to me, I murmur, “You’ve got a strange way of showing it.”
“You’ve got a strange way of liking it.”
In that moment, he sets my world on fire then stands back to watch it burn. But I won’t go quietly. If he wants ashes, I’ll become a goddamn ash cloud.
“For the record, I hate when you yell,” I murmur.
Blink.
“I hate when you’re cruel.”
Blink.
“And I really hate that you were married.” 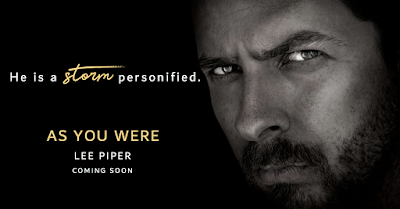 Catch up now with LIE TO ME!

Lee Piper is a lover of books. She often juggles reading seven novels at a time for the sheer joy of it. When not writing, she is either reading, at the beach, or eating her body weight in chocolate.

Lee Piper's debut novel, Rock My World became a bestseller and was a Raven Award finalist for Favorite Contemporary Romance and Favorite Cover. Her second novel, Rock My Body, was voted Best Book by LASR Readers and was a finalist in the 2017 Readers' Choice Award. Lie to Me, Book #1 in the Rising Star series was reached number seventy-eight in the 2018 Goodreads Readers' Choice Award.