All books in the Supernatural Love Stories in the Absurd Series are stand-alone and can be read in any order. 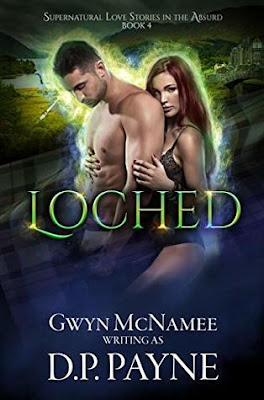 Disclosure of Material Connection:  I received this book for review from Masque of the Red Pen Publishing and the author.  I was not compensated nor was I required to write a positive review.  The opinions I have expressed are my own.  I am posting this in accordance with the Federal Trade Commission's 16 CFR, Part 255:  "Guides Concerning the Use of Endorsements and Testimonials in Advertising".

A legend under the surface. A woman obsessed. A destined love. Returning to Loch Ness means coming home in more ways than one. The monster exists. I’ve seen him. Visions of the beast haunt my dreams and waking hours. I need to get back to the loch. To him. When he rises from the water again, I watch him shift into a sexy Highlander right before my eyes, and everything I think I know evaporates. He’s so much more than I imagined. A magical attraction between us leads down a path of ancient curses, family lore, and to an unmistakable love. But will it be enough to keep him human, or will he return to the murky depths with my heart?

This story gives voice to a myth or the unexplained.  It turns a could be into a possibility.  It reminds me of a show/movie I once watched where children can see what adults don’t believe in anymore.

Ainsley Beath has come full circle.  Bryce MacDonald is frustrated by his situation.  It puts a very romantic spin on something a lot of people wonder about.  Are the tales true?  What if?  We keep reading because we have to wonder how this author is going to end her twist.  Part of the twist I loved was the thought of family history.  Don’t you ever wonder about past family members?

This book is a great showcase of the author’s creativity.  One great thing about writing a fantasy is that the sky’s the limit.  But this isn’t a child’s fantasy so expect some heat.  Ms. Payne also makes the time to include a character from mythology.  Once I got started this was a book that was impossible to put down.  The chapters passed by so quickly that before I knew it the story was finished.

A haunted mansion. A sexy ghost. A contractor determined to fix both.
Buying and renovating the old plantation house seems like a great idea. The fact that it’s supposedly haunted by the spirit of a murdered prostitute is a minor oversight.
I don’t believe in that crap anyway.
But after a late-night rendezvous with a sexy spirit elicits a very real nocturnal emission from me, I have to rethink my belief in poltergeists…and love.
The intoxicating woman who has been trapped here for over a century casts a spell over me with her humor, courage, and passion.
I have to do something to free her from her ethereal prison.
But will my actions break her metaphysical chains, or will they release something darker into my new home?

A cursed pharaoh. A determined archaeologist. Three days to find true love.
The dank depths of the Egyptian ruins reveal something I’ve been searching for my entire adult life—the tomb of the mysterious pharaoh, Nebtawyre Mentuhotep IV.
And somehow, the sexy king steps from his sarcophagus very much alive.
Lust soon overpowers reason as I fall down the rabbit hole with Wyre.
He claims me completely—my mind, body, and soul.
We only have three days to break a 4,000-year-old curse placed on him by his crazy ex.
If we don’t, he’ll return to his tomb and take my heart with him.

A wendigo controlled by a curse. An insatiable mystery woman. One sexy, crazy ride.
Greed. For the last 4,000 years, it’s been my curse.
Every day, I live with the repercussions of the terrible choices I made.
I thought I’d seen it all…then a black aura crosses my path.
The beautiful woman it belongs to sends my world into a tailspin.
She gets under my skin, hypnotizing me with her adventurous and kinky nature. I almost forget I know nothing about her.
Thinking with the wrong head can certainly get a man in trouble, but in this case, it could mean an end worse than my curse.

***Parched contains content for those 18 years and older only. It is crazy, over-the-top, and kinky. If you don't enjoy steamy and sometimes raunchy scenes, this book probably isn't for you. Skip to Cursed, book two, which is considerably tamer but still very steamy, and start there. These are stand-alones so you can pick up any of the books in any order. ***

Gwyn McNamee is an attorney, writer, wife, and mother (to one human baby and two fur babies). Originally from the Midwest, Gwyn relocated to her husband's home town of Las Vegas in 2015 and is enjoying her respite from the cold and snow. Gwyn has been writing down her crazy stories and ideas for years and finally decided to share them with the world. She loves to write stories with a bit of suspense and action mingled with romance and heat.
When she isn't either writing or voraciously devouring any books she can get her hands on, Gwyn is busy adding to her tattoo collection, golfing, and stirring up trouble with her perfect mix of sweetness and sarcasm (usually while wearing heels). An admitted shoe whore, Gwyn's closet rivals Carrie Bradshaw's and is constantly expanding.
Gwyn's debut novel, Savage Collision, the first book in The Hawke Family Series, releases September 1, 2016.

A Midwest girl living in Las Vegas with her husband and two dogs, D.P. Payne is a lover of all things kinky, romantic, and quirky. In addition to her love for writing, she is a voracious reader, avid watcher and critic of movies and television, and devourer of music like it is oxygen.
D.P. tries not to take herself too seriously; her prior career as an attorney was serious enough. In that vein, her series, Supernatural Love Stories in the Absurd, contains plots that are a bit over-the-top, and laugh-out-loud funny at moments.
D.P. loves hearing from fans. She can be contacted at authordppayne@gmail.com or on social media.