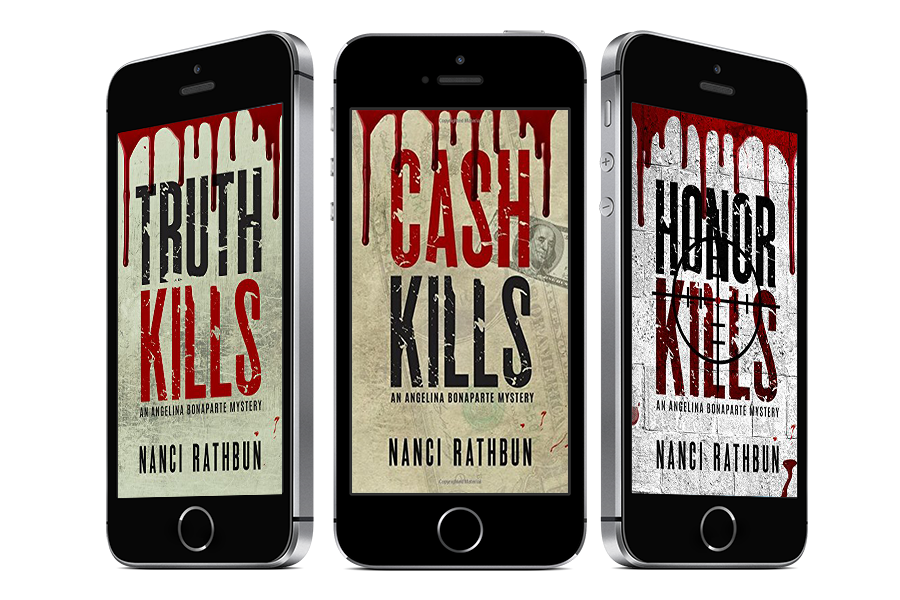 A murdered mistress. An accused mob boss. Can two detectives put their differences aside to find the real killer?

Angelina Bonaparte is starting from square one. After a messy divorce, the middle-aged librarian put down her books and picked up a new gig as a private investigator. When a mob boss heads to jail for his mistress' murder, she has no issue with the womanizing scumbag rotting in prison. But when the suspect's pregnant wife swears his innocence, Angelina can't find it in her heart to refuse the case.

Already reluctant to get involved, her frustration grows when she's forced to work alongside Ted Wukowski, a homicide detective who thinks a crime scene is no place for a woman. In the search for clues along the mistress’ long record of broken hearts and promises, Angelina’s natural charm is the perfect complement to her temporary partner's take-no-prisoners interrogation style. And before long, she and Ted can feel their grudging respect transform into an undeniable attraction.

To solve the case and catch the murderer, the PI and the cop must learn to trust each other completely before an innocent man goes to jail for a crime he didn't commit…

Buy Truth Kills today, and ride along with a hard-hitting detective who’s not afraid to reinvent herself!

Even Fictional Characters Need a Home


Have you heard the old joke about the husband who comes home late one night, opens the bedroom closet and finds a half-dressed man hiding there? “What are you doing in my closet?” the husband asks. “Everybody’s gotta be somewhere,” the man answers.

It’s a groaner, but its silliness holds a kernel of truth. Everybody does have to be somewhere, even fictional characters. I find it hard to relate to a character, unless I can place him or her in a setting. Consider Miss Marple ambling along the village streets of St. Mary Mead, Dr. Zhivago riding across the frozen Russian landscape, or Jane Eyre scuttling through the dark and dreary rooms of Thornfield Hall. Would they be as alive, as compelling, if their environments were not compellingly described? Not to me. So when I decided to set the first Angelina Bonaparte mystery, Truth Kills, in Milwaukee, Wisconsin (I qualify this with the state because a taxi driver in the deep South once wondered if that was in Hawaii!), I found it natural to include local landmarks in the story.


Every private investigator relies on sources for information. Angie schedules a meeting with a possible insider informant at Blu, the cocktail lounge at the top of a landmark downtown hotel. She tells the reader: “The Pfister is an old Milwaukee gem, an 1890s Victorian built of local stone and graced with bright red awnings on the sidewalk level. Inside, a permanent art display decorates the walls of the five-star hotel. The builder, Guido Pfister, was a German immigrant who envisioned a ‘palace for the people.’ Guido died before the building was completed, but his son Charles finished the father’s dream. Even today, guests claim they can see the portly, well-dressed Charles patrolling the halls.”

And what’s a good PI mystery without a homicide cop insisting that there’s no place in a murder investigation for an amateur – especially a female. When Angie and Detective Wukowski get into an argument while sharing a cup of coffee at Ma Fischer’s the owner, George, pockets their bill and asks them to leave. “As I walked out, embarrassed by the attention and longing to get to the car, I heard George pull Wukowski aside. ‘Women, they can be very irritating, no? But it does no good to lose your temper. You are the man, you must be in control of yourself. No?’ I smiled all the way to the car.


When there are murders, there are bodies that require last rites. Angie gets ready for Elisa Morano’s funeral in Truth Kills: “The service was slated for eleven at the Church of the Gesu. Known locally simply as Gesu, the 1890s French Gothic stone structure sits in the midst of the Marquette University campus on Wisconsin Avenue. Parking is fierce there, so I slid the Miata into a paid lot and walked five blocks to the church. The day was fine, and during the short stroll, I tried to reassure myself that it would be years before people would be walking to my funeral. Of course, Elisa’s age denied the security of that belief.”

The people in my mystery series inhabit a place and time that I take great care to make real in the stories because, without that, the narrative seems flat and the characters without substance. P.D. James, whose iconic Adam Dalgliesh series sets a very high standard, wrote this in Talking About Detective Fiction: “Place, after all, is where the characters play out their tragicomedies, and it is only if the action is firmly rooted in a physical reality that we can enter fully into their world.” Welcome to the world of Angelina Bonaparte!

➜Sign up as a host here
Posted by Lynn's Romance Enthusiasm at 9:30 AM