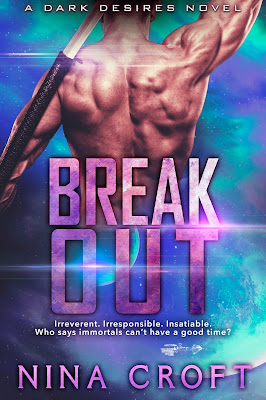 The year is 3048, Earth is no longer habitable, and man has fled to the stars where they’ve discovered the secret of immortality—Meridian. Unfortunately, the radioactive mineral is exorbitantly expensive and only available to a select few. A new class comprised of the super rich and immortal soon evolves. The Collective, as they’re called, rule the universe.

Two-thousand-year-old Ricardo Sanchez, vampire and rogue pilot of the space cruiser, El Cazador, can’t resist two things: gorgeous women and impossible jobs. When beautiful Skylar Rossaria approaches him to break a prisoner out of the Collective’s maximum security prison on Trakis One, Rico jumps at the chance. Being hunted by the Collective has never been so dangerous–or so fun!

Scene right after the ending of Break Out… 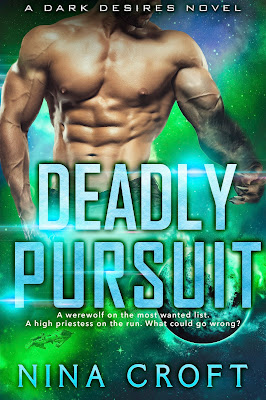 Dark Desires, Book 2
Tagline: Eternal love is the greatest risk of all.

Breaking assassin Jonathon Decker out of a maximum-security prison on Trakis One seemed like a good idea at the time. Now, pursued across space by the two most powerful factions in the universe, the crew of El Cazador are having second thoughts. They’d like to give him back. Unfortunately, that is no longer an option.

Jon is used to working alone. Now, he’s stuck on the space cruiser El Cazador until he can work out just what he’s supposed to know that puts him on everybody’s most-wanted-dead list. He’s not happy that the crew includes a runaway priestess with designs on his virtue—such as it is. Jon likes women, but he gave up the role of protector a long time ago, and Alexia, High Priestess of the Church of Everlasting Life, is an accident waiting to happen.

After twenty-four excruciatingly boring years of doing her duty, Alex is finally having some fun. She never meant to run away—it was a rash impulse—and she means to go back—eventually. But first, she’s going to squeeze enough excitement out of the situation to last her a lifetime. And what could be more exciting than a stunningly gorgeous werewolf?

Meanwhile, the Church are chasing their missing priestess, and the Collective are pursuing their escaped assassin. Being hunted has never been more deadly…or more fun.

First Shift…
“I now pronounce you man and wife.” Tannis turned around to the audience. “Does this shit actually mean anything?”
“Back on Earth, it was legal for couples to be married by a ship’s captain,” Rico said. “That’s you.”
She shrugged. “I guess so. I can’t see that it makes a difference, but congratulations.”
“And you may kiss the bride,” Rico added.
Jon lowered his head and kissed her gently, as though she were some fragile little thing that might shatter if he was too rough. He hadn’t done any more than kiss her gently since she’d come around and he’d told her just what he’d done to save her life.
It was six days since they’d fled from Trakis Five. Six days since Jon had sunk his teeth into her throat. She’d lived and she was getting stronger, though she still felt weak. Jon had said that once she shifted, she’d be fully recovered. But so far she hadn’t managed to drum up the courage. He’d said it would be different once they were out in the forest. Apparently, space ships messed with werewolves’ heads.
She was a werewolf. It didn’t seem real.
No one had followed them from Trakis Five, and the captain reckoned they were safe for now, though Tannis had hardly been herself since they’d escaped. She seemed distracted. But Skylar, as security officer, had stated that they were going to lay low for a while after they had dropped her and Jon off. And after they’d gone through this weird little ceremony which Jon had come up with after talking with Rico. Who’d have expected a vampire to be an expert of weddings?
Anyway, they were now in orbit around Jon’s old planet.
Daisy came forward and hugged her…gently, then Janey. “You make a beautiful bride.” Rico had suggested she wear white—it was traditional, but that was almost as bad as black. So she was in a scarlet dress, which Janey had somehow altered to fit her. It left her shoulders bare, skimmed her body and the ground, and clashed beautifully with her hair.
Jon was in black though, but he looked good in it. With his dark hair pulled back into a ponytail and a smile on his gorgeous lips, he actually looked…happy.
“Look after him,” Rico said as he kissed her cheek.
“I will.”
He poured drinks and she leaned against Jon’s side, sipping whiskey as Daisy took the ship down. In the docking bay, Jon hefted a rucksack onto his back with a few supplies and a change of clothing and they headed down the ramp. Jon wrapped her smaller hand in his and pulled her close.
“Aw isn’t that sweet,” Rico said.
“Fuck off,” Jon growled. But he sounded positively mellow.
“We’ll see you in a month,” Tannis said. “Don’t do anything I wouldn’t do.”
They watched as the ship took off, staring up into the sky until she disappeared, merging with the stars. Then Alex looked around her. They were in a clearing in a forest, huge trees all around them. It was nighttime, a sickle moon hung in the sky and stars twinkled over the vastness of space. A light wind rustled the leaves and she lifted her head and breathed in deeply. The air was heavy with the scent of growing things and something alien stirred to life inside her. Waking and stretching.
Jon turned to her as though he sensed the change. “You ready?”
Was she? She was a goddamn werewolf. What would the Church think of their priestess now? What did God think of her? Though really why should she care? God hadn’t saved her back there on Trakis Five. Jon had.
She nodded.
“Good.” Reaching out, he loosened the ties at the shoulders of her dress and it dropped to the ground pooling around her feet like blood. Though the air was warm, she shivered as Jon stepped back and stripped off his own clothes. Her breath caught at the sight of him and she trembled. He wasn’t aroused, but as she stared, his cock twitched and pulsed.
“Later,” he murmured.
“Promise.”
“I promise.”
The thing inside her growled and raked a claw down her insides. “Ouch.”
“It’s time,” he said.
Her skin prickled with energy, tremors rippled up her spine and fear flickered inside her. Her skin was burning, shooting pains jabbing at her muscles.
“Relax,” Jon said. “It only hurts if you fight it. Trust me.”
And she did. Suddenly the night throbbed with magic. Alex relaxed, and the fear receded as she gave herself up to the enchantment and the change flowed over her.

The world was altered. Twisting her head, she stared at the rich dark red fur that covered her back. She lifted each paw in turn, placing it down with exaggerated care, digging her sharp claws into the soft earth.
The weakness that had afflicted her had vanished. She felt vital, alive, everything sharply defined. Her ears swiveled, to pick up the sound of the wind in the treetops above her, and somewhere far off a bird hooted. She opened her mouth and tasted the damp air on her tongue. The scents of the night filled her nostrils, the rich soil, leaf mold, the musky aroma of wolf.
Jon!
He stood close by, watching her from his dark wolf’s eyes, his plumed tail waving. He stepped toward her his muzzle touching hers lightly, then he yipped once, whirled around, and headed into the trees.
She ran through the dark forest, the pads of her paws making no sound on the soft leaf-littered floor. Effortlessly, she weaved her way between the trees, following where he led. As the trees thinned, she picked up speed, running ever faster, until she was aware of nothing but the wind flowing past her. All her tension, the weakness that had plagued her for so long, fell away beneath the relentless stretch and release of muscle and sinew. A wild exhilaration filled her.
She ran until she was exhausted and then stood, head hanging down, breathing deeply, feeling each breath, the hot blood flowing through her veins. She sensed Jon come up beside her. He nudged her with his nose, and she followed him to a small overhang. Collapsing to the sandy ground, she rested her head on his soft silky fur and closed her eyes.

When she awoke, she was back in human form, lying on the cool sand with Jon’s hot body wrapped around her. She could feel the hardness of his erection pressing against her ass and she wriggled.
He had promised.
She pressed back against him, wriggled again just to make her intentions clear.
One big hand cupped her breast as the other slid between her thighs. He kissed the sensitive skin at the back of her neck and she shivered.
“Are you okay?” he asked.
“Yes.” She was better than okay, but she couldn’t find the words to tell him, so she rolled over, took his face between her hands and placed her lips to his, putting everything she felt into the kiss.
“Just in case I forget to tell you…”
He nuzzled her neck, then pressed her down onto her back and came up over her. “Hmm?” he asked. “Tell me what?”
Then he filled her with one hard lunge of his hips and her breath left her on a sigh. She lay for a moment, as her body adjusted to the size of him, the fullness, then she bucked her hips to show she was ready for more.
“That I love being a werewolf,” she said. 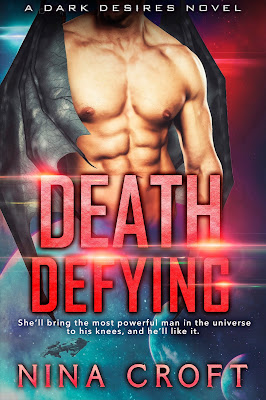 Dark Desires, Book 3
Tagline: Eternal love is the greatest risk of all.

Captain Tannis of the starship El Cazador is part snake, part human, and—according to some—all bitch. She is one job away from her lifelong goal—to achieve the immortality she craves. The assignment: protecting the most powerful man in the Universe.

After five hundred years, Callum Meridian, founding member of the Collective, is bored out of his mind. Until he realizes he’s physically changing—into what, he isn’t sure. Callum is determined to discover the truth, but his own people will stop at nothing to prevent it from coming out.

With a coup brewing and the crew of El Cazador close to tossing him off the ship, Callum turns to Tannis. Sparks fly as they work together to make it out alive. But can Callum really trust the one woman hell bent on using him? Defying death has never been more dangerous, more sexy, or more fun.

Growing up in the cold, wet, north of England, Nina Croft spent a lot of time dreaming of faraway sunnier places and ponies. When she discovered both, along with a whole load of other things, could be found between the covers of a book, her life changed forever.

Later, she headed south, picked up the perfect husband along the way, and together they volunteered to work in Africa. There they discovered a love of exotic places and a dislike of 9-5 work. Afterward they spent a number of years travelling (whenever possible) intermingled with working (whenever necessary.) Eventually they stumbled upon a remote area in the mountains of southern Spain and the small almond farm they now call home.

Nina spends her days reading, writing and riding her mare, Gencianna, under the blue Spanish skies—sunshine and ponies. She reckons this is proof that dreams really can come true if you want them enough.