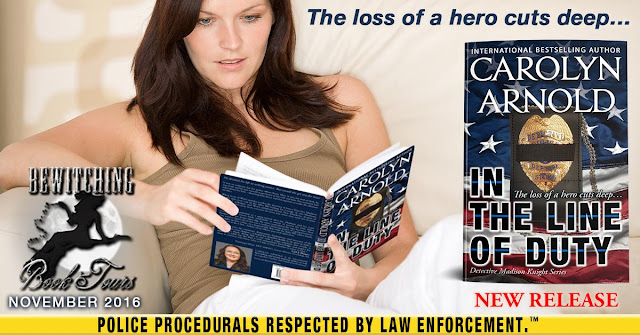 He devoted his life to seeking justice. But would she get any for him?

It was an ordinary day for police officer Barry Weir. It was the end of shift, he was tired, and he just wanted to get home to his wife and kids. But someone had other plans for him, shooting him down and forcing him to make the ultimate sacrifice.

When news of Weir’s murder reaches the department, it leaves Detective Madison Knight and every cop in the Stiles PD itching for revenge. It cuts Madison’s boyfriend, colleague, and Weir’s childhood friend, Troy Matthews, deepest of all, driving him away from everyone he loves just when they need one another the most.

With evidence pointing to a gang-related drive-by, Madison and her team investigate the town’s seedy underbelly in search of justice for their fallen brother. But the deeper they dig, the more convoluted the case becomes. Now they need to figure out if this was a random shooting as part of a gang initiation, a straight-up hate crime, or a targeted kill. But with members of the Stiles PD under attack, they have to do it fast…before more officers pay with their lives.

Madison walked through the station, feeling as though time was moving in slow motion as she first headed to her desk. Once there, she took a seat and opened the bottom drawer, nausea swirling in her gut as she pulled out a clear plastic Baggie. It was where she kept her mourning band. She’d hoped to never need it again…

She pulled it out, and for a few seconds, she held onto it, letting her fingers dip into the thin ribbing in the half-inch-wide black cloth. She unclipped her badge from its holder and slipped the band on, carefully placing it so that it ran horizontally across the center of her badge. As she stared down at the badge, thinking about what that simple band of black meant, a single tear crept down her cheek. But she didn’t have time to dwell on her fallen brother and grieve right now.

She swiped at her eyes and returned the Baggie to the drawer and headed for the briefing.

Even with her detour, she beat Sergeant Winston there. Sovereign and Stanford were already in the room along with about sixty officers. It was standing room only, and Madison scanned the crowd for Troy. But there was no sign of him or of her partner, Terry Grant. She didn’t see the police chief, either.

Andrea Fletcher, Troy’s older sister, had taken over the position almost seven months ago. To say she was a vast improvement over her predecessor was putting it mildly. Patrick McAlexandar was a chauvinist pig who had been in bed with the Russian mafia—the same mafia that almost killed her five months ago. And she was certain there was still a hit out for her. She couldn’t allow the passage of time to lull her into thinking it had gone away. If McAlexandar’s track record wasn’t bad enough, he also had aspirations to be the city’s mayor, but Madison would do whatever she could to sabotage his efforts.

Terry walked into the room then and came over to her. She hugged her partner without hesitation. As much as they teased and rankled each other, he was like the brother she’d never had.

“I didn’t see you at the hospital,” she said as she released him.

“We must have just missed each other. I got there as soon as I could. Dani’s still not sleeping through the night.”

“She is only two months old,” she reminded him.

“That’s what Annabelle tells me, and she’s such a good mother. Besides—” Terry gestured around the room “—complaining about the lack of sleep doesn’t really seem like a big deal in light of everything.” He fell silent for a few seconds and then added, “I can’t believe he’s gone.”

“Me neither.” The nausea that had settled into the pit of her gut didn’t seem like it would be going away anytime soon.

Sergeant Winston entered the room, his mourning band also on his badge. Terry was working on getting his band in place, too.

The sergeant stood at the front of the room. He cleared his throat, and all the chatter stopped. “As you may have heard, Officer Barry Weir was shot and killed this morning.”

The author starts her story off showing that officers do have a life outside of work.  But in an instant work can intrude.  Ms. Arnold also shows that this is not a job for everyone.  It takes a very special person who can put our lives above their own.
In light of recent events, this may be a hard story to read. It brings home how much of a family police officers are.  And how much they’re willing to protect each other.  They feel sadness, pain, and joy just like the rest of us – or at least most of us.  I’m giving you a warning that this is a tissue book – just sayin’.
Madison Knight shows how hard it is to shut the job off.  She has me questioning whether I would ever go to a place where violence has taken place.  Madison shows the reader how much we have to respect the people that wear the uniform.  Some people may not like what they do but can you imagine what our lives would be like without them.
What impressed me is that the author takes the time to take the reader through what happens when the police investigate a crime.  She kept the scenes moving along and doesn’t bog them down with too much information so that the readers get bored.  One great thing is that she got me out of the comfort zone of reading romances.  She has so much going on that I didn’t even miss it.  For me, the ending is open-ended which leaves the door open for the next book.  If not for a tour like this, I may have never discovered this series and I can’t wait to see what Madison has in store for the readers.

ABOUT THE DETECTIVE MADISON KNIGHT SERIES

Murder. Investigation. The pursuit of justice. Do you love trying to figure out whodunit? How about investigating alongside police detectives from the crime scene to the forensics lab and everywhere in between? Do you love a strong female lead? Then I invite you to meet Detective Madison Knight as she solves murders with her male partner, utilizing good old-fashioned investigative work aided by modern technology.

This is the perfect book series for fans of Law & Order, CSI, Blue Bloods, Rizzoli and Isles, Women’s Murder Club, and Hawaii Five-O.

Read in any order or follow the series from the beginning: Ties That Bind, Justified, Sacrifice, Found Innocent, Just Cause, Deadly Impulse, In the Line of Duty, Life Sentence (Bonus Prequel).

CAROLYN ARNOLD is an international best-selling and award-winning author, as well as a speaker, teacher, and inspirational mentor. She has four continuing fiction series—Detective Madison Knight, Brandon Fisher FBI, McKinley Mysteries, and Matthew Connor Adventures—and has written nearly thirty books. Her genre diversity offers her readers everything from cozy to hard-boiled mysteries, and thrillers to action adventures.

Both her female detective and FBI profiler series have been praised by those in law enforcement as being accurate and entertaining, leading her to adopt the trademark: POLICE PROCEDURALS RESPECTED BY LAW ENFORCEMENT™.

Carolyn was born in a small town and enjoys spending time outdoors, but she also loves the lights of a big city. Grounded by her roots and lifted by her dreams, her overactive imagination insists that she tell her stories. Her intention is to touch the hearts of millions with her books, to entertain, inspire, and empower.

She currently lives just west of Toronto with her husband and beagle and is a member of Crime Writers of Canada and Sisters in Crime.

SaveSave
SaveSave
Posted by Lynn's Romance Enthusiasm at 9:30 AM