Disclosure of Material Connection:  I received this book for review from IndieSage PR and the author.  I was not compensated nor was I required to write a positive review.  The opinions I have expressed are my own.  I am posting this in accordance with the Federal Trade Commission's 16 CFR, Part 255:  "Guides Concerning the Use of Endorsements and Testimonials in Advertising".

She’s holding out for a happy ever after.

I know where to find my happily ever after—between the pages of a romance novel. It’s why I sell books, why I blog about them, and why I’ll never get disappointed by love.So what if my brother’s best friend from high school is now a bestselling author? Or that he just blew back into town on a Harley, filling out a pair of jeans like he never did before? Or that he’s agreed to do a signing at my bookstore on such short notice? Because despite all his adoring female fans, I kind of hated his book.

The last time I saw Annie Denning, she was a senior in high school, three years older than me and way out of my league.
Now I’m her last-minute date to a wedding, and what started as a night of pure fun has turned into something more real than either of us anticipated.Annie is my muse. When I’m with her, my writer’s block fades away, and the words finally flow.

The only problem? She wants the fairy tale—her very own happily ever after—and anyone who’s read my book knows the truth. I just don’t believe they exist. 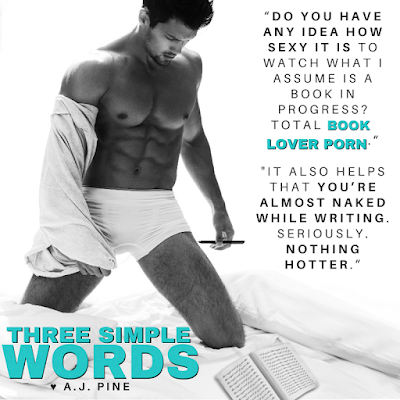 She took a step closer, and he inhaled the warm scent of vanilla and, maybe, a hint of cinnamon? He’d been too caught up in the moment to notice before. But now he began to feel drunk, wondering if one glass of wine could knock him on his ass. But he knew it couldn’t have. It was this woman.

She leaned closer. Because apparently she was trying to kill him.

“What would the line be—if you wrote it in your book? How would you describe my scent?”

Uh, he could describe the agony of the erection straining against his pants, but somehow he thought she wouldn’t appreciate that.

Christ. Words. She wanted words, now? After he told her he was blocked? But he had to prove his plan would work, that they could use this evening—and each other—to their advantage and neither of them be worse for the wear.

Fine. Words. The girl wanted words, so he would deliver. “He grew drunk,” Wes said. “Drunk on the nearness of her, on the warm, sweet scent of home. Because that’s what she was to him. She was home. And until he kissed her, he hadn’t known what that meant. Home wasn’t a place. It was
a state of mind. It was her, the intoxicating scent of her skin, and his lips pressed against it.”

He hadn’t realized until he spoke the last of it that his eyes were closed. Maybe hers were, too, because she wasn’t saying anything. All he heard was her sharp, shallow breaths. All he felt was his forehead pressed to hers.

How the hell did they get here?

“I think your writer’s block might be cured,” she whispered. “That was way more romantic than an ice
sculpture.”

“Whatever,” she countered, but she was still smiling.

“How about your ex situation? That cured yet, or do we want to give them more of a show?”

She cleared her throat. “I think the jury’s still out.”

Okay. They were on the same page—so to speak. He wanted this night, whatever ended up happening, and Annie seemed on the verge of jumping off this cliff with him.

He straightened and took a step back so his eyes could find hers. She chewed her bottom lip.

“One night, Annie. Whatever you want out of this evening, I’m your guy. And when we go home tonight—”

“Tomorrow,” she said, and Wes’s brows drew together. “When we go home—tomorrow…” 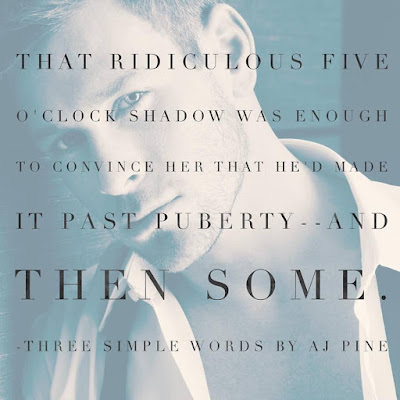 Wes Hartley is a man who has a way with words but it’s a job that has lots of pressure.  It’s also a job that I admire because it takes a very creative person to do what these people do in order to keep us entertained.  Annie Denning has two jobs that she loves – blogging and owning a bookstore.  I’d live in a bookstore if I could – the small independent ones and not the big national chain ones.  And it’s also a reason that I love libraries.  Part of the funny element for me was seeing how Calamity Jane Annie is.

What I found interesting was that we have a man who is a fictional character writing about fiction.  And on top of that he seems to be life imitating art.  It does make you wonder who has a life like that and that there seems to be a fine line between what the author writes about and what occurs in real life.  The only thing that I had a problem with was that he supposedly had a high school crush but once confronted by said crush I just didn’t feel the connection.  But if you make it to the end you’ll have a smile on your face when you get that “Aw” moment.

With this book I felt more of a voyeur.  I felt like an outsider looking in and sometimes I had to read a scene more than once because I just wasn’t feeling it.  But it also showed me the tough life that authors have.  The reader has certain expectations and sometimes we get disappointed when we feel that those haven’t been met.  I respect them for what they do and all for little thanks and not much reward.  As a reader we are not going to always enjoy each book but the author puts in a lot of time, effort, and sometimes a lot of research in the hopes that we do.  And in the Epilogue Annie says it best that this was an adventure.  I’m glad that Ms. Pine let me in on this particular one and I look forward to more coming my way. 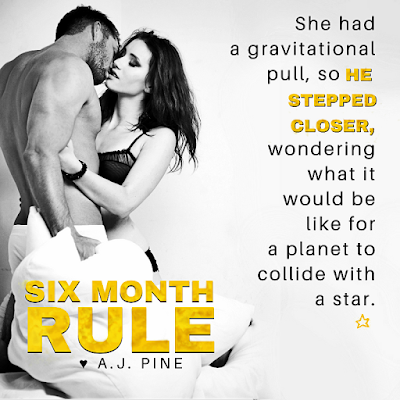 DON'T MISS THE OTHER BOOKS IN THE KINGSTON ALE HOUSE SERIES!

She created the game, but the rules are about to change.

The second I met Will Evans in his three-piece suit with that hot as hell British accent, I wanted him.

That is...until he insulted my shoes and stole my corner office.

Now I have to work side-by-side with the surly British arsehole who just set my career back six months.

It's fine. That accent won't get to me, no matter how sexy it sounds when he asks permission to do things professionals shouldn't do. On the couch. In the corner office I still wish was mine.

Maybe we can't keep our hands off each other, but I'm sure as hell not falling for a guy who lives an ocean away. Because in six months, he's leaving for good.

I don't do broken hearts, but you know what they say...

There's a first time for everything.

Each book in the Kingston Ale House series is a standalone, full-length story that can be enjoyed out of order.

How far will one man go for the woman he's loved since high school?

Jamie Kingston has been Brynn Chandler's best friend since middle school. Only once was their friendship tested—when Brynn gave Jamie a single kiss. Since then, they've had an unspoken agreement never to cross that line again, and she’s ready to let go of the past and move on.

But Jamie has loved Brynn for as long as he can remember, and now that he's ready to tell her, she has her sights set on someone else. Knowing this is his last chance, he asks Brynn to go on a two-week road trip. But their time alone brings old hurts to the surface, and Brynn has to decide if the one that got away lies at the end of the journey or if he's been by her side all along.

AJ Pine writes stories to break readers’ hearts, but don’t worry—she’ll mend them with a happily ever after. As an English teacher and a librarian, AJ has always surrounded herself with books. All her favorites have one big commonality–romance. Naturally, her books have the same. When she’s not writing, she’s of course reading. Then there’s online shopping (everything from groceries to shoes) and, of course, a tiny bit of TV where she nourishes her undying love of vampires and superheroes. And in the midst of all of this, you’ll also find her hanging with her family in the Chicago burbs.