We're happy to be hosting Mark Connelly and his WANNA-BE'S Blog Tour today!  Please leave a comment or question for Mark to let him know you stopped by! 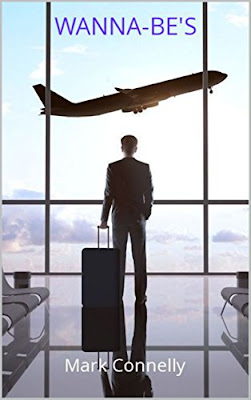 With his new girlfriend – a soccer mom with a taste for bondage – urging him to “go condo,” failed screenwriter Winfield Payton needs cash. Accepting a job offer from a college friend, he becomes the lone white employee of a black S&L. As the firm’s token white,
he poses as a Mafioso to intimidate skittish investors and woos a wealthy cougar to keep the firm afloat. Figure-skating between the worlds of white and black, gay and straight, male and female, Jew and Gentile, Yuppie and militant, Payton flies higher and higher until the inevitable crash. . .

This book right here! What can I say about Winfield Payton...is he the most unlucky pasty or most unlikely fall guy...what a schmuck...I laughed so hard at this,for this guy....with this guy....every character described in this book will immediately remind you of a real life joker in the in the 24 hour news cycle on all of the Major networks and cable television channels regurgitating skewed facts benefiting them and lining their pockets....it's hip and fresh writing which could easily become a HBO series....or Starz...maybe...anyway get this book....I laughed so hard...almost popping my recent stitches from surgery...Mr. Connelly...thanks for making my recuperation fun...this book is not for the faint of heart..or PC sensitive readers... 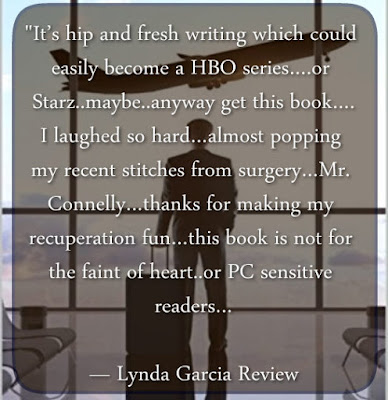 Winfield “Win” Payton is an interesting man.  Just like him, his morning ritual is one I’ve never heard before.  He shows how prejudice is part of his daily life.  With everything playing out in the news lately it’s something that you would think you could relate to.  Win’s life takes an interesting turn once he meets Barbie Monreal.

You certainly get a look at his business acumen in this story.  The only problem I had was that I felt like it was an “us against them” and he was a token – which I’m sure in some instances it may actually work that way but we just don’t see it.  Some readers may feel offended by that as well.  Felt like the story jumped all over the place and it was hard to hold my attention.  He has so much going on in his life but you only see bits and pieces of each.  Win tells me he has a relationship with Barbie but I just don’t see it.

I had high hopes for this book on reading the back-cover copy.  What I read didn’t live up to what was actually between the covers.  On a good note, I do believe that this book might be a good candidate for a book club because there is so much to discuss.  Some may find a few of the scenes offensive due to language and racial tensions.  But for or a book club, this story would stimulate discussions of all kinds.

This was a book where I found it very hard to like the main character.  He’s a man with few scruples – he thinks nothing about lying to get what he wants.  Just like the rest of the story, the ending was different.  I didn’t feel there was any type of conclusion.  Would I read this author again?  Probably not.  But if presented with a book of his again I don’t know that I could trust the blurb to let me know about the story.  The only way to know for sure would be to try and read it and see if that would change my mind about this author’s writing style.


Winfield Payton awoke to a mother’s voice.  Not his mother—but someone’s mother. It was the commanding yet compassionate voice mothers develop, stern but apprehensive.  It was a voice rarely heard in Downer Estates, a brick apartment complex housing the usual collection of upscale “singles” who live within Frisbee range of urban universities, attend jazz concerts in the park, practice safe sex, drive alphabet cars (BMWs, SUVs, VWs), cybersex on company laptops, faithfully recycle Perrier bottles, and sip low-cal cappuccino in Starbucks while checking the fates of their mutual funds.
It was a suburban voice, a beach voice, a picnic voice.  The voice of a concerned mother directing her brood.  “Now, look, Brandy, I told you before.  Mommy will be home in just a little while.  You can have cereal.  Where is Heather?  OK, tell Heather to give you some raisin bran.  Take your vitamin.  And don’t go near the pool until I get back.  Do you understand? Don’t go swimming until Mommy comes home.”
As yet Win had not opened his eyes; he was too exhausted. Confronting daylight would be painful.  Feeling the sun warm his naked back, he buried his face in the pillows.  For a moment he imagined he was at Bradford Beach, snoozing while mommies and kiddies trooped over him, sprinkling his blanket with sand and popsicle drippings.
But no, he was in bed.  His bed.  His fingers felt the familiar smooth lacquered headboard. The pillow bore the scent of Old Spice, his cologne—mundane but reliable.
Home.  He turned his aching neck. This simple movement triggered intracranial alarms.  Now everything hurt.  His head throbbed.  His neck tightened. His back ached. Streaks of raw flesh burned across his chest and thighs.
Oh!  His body bore the imprint of what his clouded mind failed to recall. Opening an eye to the sun, he saw a gleaming bottle of Absolut on the bedside table.  The bottle was nearly empty.  Oh!  A ceramic ashtray held the twisted remains of weedy joints.  Oh!  Two broken poppers lay on the carpet.  Oh!   Leaning over, he saw—amid the tangled debris of his clothes—three lipstick-stained balls of Kleenex, each containing a spent condom.  Oh!
Rolling over, Win groaned, feeling like a crash victim.  The female voice in the other room called out to him.  No longer the mommy voice, it was the supportive, deferential, eager-to-please voice of a Sixties sitcom wife.  Mary Tyler Moore exuding “Oh, Rob!” compassion. “Do you want Motrin?” she asked, “I’m making coffee.”  He heard the sounds of housewife bustling in his bachelor kitchen.
“Motrin,” he croaked, like a wounded GI begging for morphine. Motrin, hell. He needed intensive care.  IV’s.  Oxygen. And Band-Aids. Sitting up, blinking in the sun-light, Win noted the thin, blood-lined scratches and nicks across his chest and thighs. Steve McQueen tangled by barbed wire in The Great Escape.
“Here, baby.”
The woman standing in the doorway bore no relation to the voice flowing with flight attendant charm.  Despite the black eye makeup, false eyelashes, and hooker-red lipstick, she was clearly pretty. Her sensibly short blonde hair was cutely, boyishly cut. It complemented the husband-bought
Mother’s Day earrings. No doubt she had been trying to look like Debra Harry since fifth grade.
Below the chin she was decidedly dissimilar.  Her neck was gripped by a two-inch leather choker studded with steel points. Metal chains led to a leather corset which maximized her cleavage and girdled her waist with tight belts and more chains. Handcuffs dangled over a thigh encased in torn fishnet.  Her wrists and ankles sported matching leather cuffs.
Instinctively, Win drew back.  Only her soft voice re-minded him that he was not in mortal danger.
“Oh, baby, look at those scratches.  I’m so sorry!  I for-get about these nails.”  She wiggled the fingers of her right hand, their dagger-like points flashing blood-red in the sun-light.  Her left palm cupped three red caplets.
He took the pills, then, reaching for a water glass accidentally gulped three and half ounces of
Absolut.  God!
“Oh, honey!”
Sitting up, Win rubbed his eyes and brushed his unruly hair.  The woman sat on the edge of the bed and began un-buckling her cuffs, dropping them into a black leather shoulder bag.
“Mind if I take a quick shower?  I have to get home to the kids.”
“Go ahead, Barbie.”  Barbie.  Gratefully her name came back to him. She disappeared into the guest bath. The architects of Downer Estates had thoughtfully equipped each two-bedroom apartment with two full baths.  Single tenants and their partners of choice could shower at the same time, going
through their customary after-sex hygienic rituals in private.  Alone in the main bath, Win gargled with Scope, doused his sore member with hydrogen peroxide, then drew a bath. 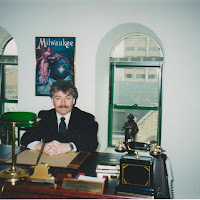 Mark Connelly was born in Philadelphia and grew up in New Jersey.  He received a BA in English from Carroll College in Wisconsin and an MA and PhD from the University of
Wisconsin-Milwaukee.  His books include The Diminished Self:
Orwell and the Loss of Freedom, Orwell and Gissing, Deadly
Closets:  The Fiction of Charles Jackson, and The IRA on Film and Television.  His fiction has appeared in The Ledge, Indiana Review, Cream City Review, Milwaukee Magazine, and Home Planet News.  In 2014 he received an Editor’s Choice Award in The Carve’s Raymond Carver Short Story Contest; in 2015 he received Third Place in Red Savina Review’s Albert Camus Prize for Short Fiction. His novella Fifteen Minutes received the Clay Reynolds Novella Prize and was published by Texas Review Press in 2005.