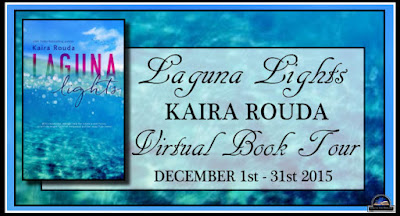 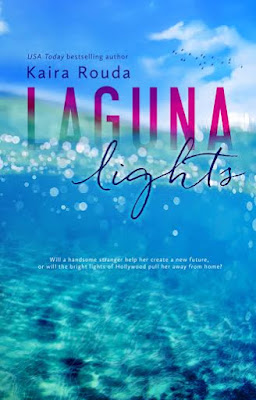 Laura Kinkaid’s glamorous Hollywood life is falling apart. After years of reality television stardom beginning in high school on Laguna Nights, her career and relationship with her long-term boyfriend Scott are fizzling out. Laura decides to go home to Laguna Beach for the weekend to attend a baby shower for her high school friend. That decision – and a car accident – will lead her to a new future, if she’s ready to take a chance at love.

Paul Dorn’s former life in New York City is far behind him and he’s working in a popular Laguna Beach surf shop when fate brings the most beautiful woman he’s ever met into his life. The attraction is instant and he has an overwhelming desire to protect her. While Paul’s retail sales career is a short-term job for market research purposes, his focus on Laura is long-term.

Will Laura allow a handsome stranger to help her create a future unlike her past, or will the bright lights of Hollywood pull her back to LA?

Laura Kinkaid had a date with a real loser.  Her life has become based upon life before the camera but is that a happy place to be.  Paul Dorn is a man who’s trying to reinvent himself.  He’s willing to move across the country to make that happen.

What I found interesting was that shortly after meeting, Laura felt the need to let Paul know exactly who she is instead of enjoying her anonymity.  It’s a story that made me glad that my life wouldn’t make for a good reality show.  It also reminded me why I don’t watch these types of shows – I just feel as if they are too fake and that everything is so scripted.

Our author shows her readers that it’s never too late to reinvent yourself.  And you just might find someone to help you along the way.  It shows that something positive can come out of a life-changing event even for those that live in the limelight.  Even though there are celebrities that seem to have disappeared into oblivion it may be that they are going and doing something that they really enjoy besides being in front of a camera.

The author created a story around a place that actually exists.  For me, I’ve never been there and after seeing how some of the minor characters acted in this story I’m not sure that it’s a place that I would want to visit.  Something you will find interesting, if you didn’t know it already, is that there was an actual reality show titled Laguna Beach:  The Real Orange County.  How much of this show might have been an inspiration for this series?  Only you will be able to decide if a reality TV love story is your cup of tea.


Laura Kinkaid stared across the table at Scott, her on-again-off-again lover, wondering why she had wasted a decade of her life with him.
They’d met in high school, and Scott had been infatuated with her. He was the new kid on the reality TV show they’d appeared on together, Laguna Nights. Fame hadn’t changed him. Yet. And back then, he’d had a full head of thick brown hair.
Today, he was a cocky, bald television star who was ignoring her. How things changed, she realized with a sigh. Maybe she was jealous, or maybe – she decided with a feeling that she realized could almost pass for hate— she was angry.
She looked out the window to the lights of LA stretching out 35 stories below. If they hadn’t been seated at the most visible, most desired table at the hottest new restaurant in LA, she would have thrown something at him. She surveyed the table to see what she could throw. Her fork? Maybe. Her full glass of expensive red wine? No, that would be a waste of good wine. Maybe even one of the pieces of intricately designed sushi taunting her from the plate of appetizers on the table. This had to be it. The proverbial last straw, she told herself. She smiled at the image she conjured -  his bald head glistening with sushi debris, the smirk wiped off of his handsome face.
Why am I so obsessed with someone who is so obsessed with himself?
“Why are you giving me that look?” Scott said, finally placing his phone on the table, its glowing contents face up and taunting her. She had to find out what was on that screen, she realized.
“We are at dinner. A romantic dinner that was your suggestion, I might add, and you’ve been on your phone for the past ten minutes,” Laura said. She knew her tone of voice, shrill and whispered at the same time, would repel him. She was right. He leaned back in his seat, a smug grin on his face, his arms crossed. Laura grabbed his phone. Her brain couldn’t register what she was viewing. She stared at the screen. She was shocked to see a young brunette woman with huge breasts barely contained within her skimpy bathing suit, and the words, “Congratulations, you and Jamie are a match!” As Laura realized what she was seeing, anger boiled deep inside her. She couldn’t decide whether to run out of the restaurant, throw his phone and smash it against one of the floor-to-ceiling windows, or simply cry.
“Hey, give me my phone,” Scott said, reaching across the table. But Laura was faster. She jumped back, cradling the phone in her hand and staring at him with disgust.
“Tinder? You’re searching for hook-ups for tonight while you’re here with me?” She’d seen the ‘so called’ dating app and its competitors and they repulsed her. Lonely people used apps like Tinder for random hook-ups. The younger women on the set of the show Laura had been producing, Reality TV Triple Play, had shown her how they worked. They’d scrolled through an array of selfies of desperate men and judged each guy’s merit by that one photo. One young make-up artist had admitted using the dating app to get free meals from men, something she insisted on before hooking up with a stranger. The woman had called the guys she’d met on the app “fuckboys,” men with no interest in having a relationship or even hanging around until morning. Now she knew another type of ‘fuckboy’: boyfriends who used apps like Tinder to cheat. Like the man sitting across the table from her at this moment. As the realization hit her, she felt her eyes filling with tears.
“We’ve been drifting ever since the show was cancelled,” Scott said. His voice was quiet, almost patronizing. He spoke the words slowly, like she was an idiot, not the woman he’d been dating for a decade. Like they hadn’t known each other since high school. Both Scott and Laura had become instant celebrities during their years on Laguna Nights. And both, unlike most of the cast members, had gone on to enjoy careers in Hollywood. In fact, when Laura was offered her own show, Hollywood Nights, chronicling her college years and first job in LA, Scott eagerly rode her coattails to fame and a sizable fortune. But eventually, like all reality television, the audience moved on and Laura and Scott had been left in a dimming spotlight.
Scott had transitioned successfully into another industry, opening his own branch office of his parents’ successful, high-end travel business in West Hollywood. He loved the travel and had even invited Laura along for some of his all-expenses-paid site inspections. But apparently the only thing that had held their relationship together was gone. She needed the camera’s focus. She needed the spotlight. It was something she craved, something that had become as necessary as breathing air. Her chest felt tight as she took a sip of water.


We never loved each other, we only used each other for television, her mind screamed. Had she ever had a true relationship, one based on love and respect, or had her entire life been as superficial as the industry she craved? Laura blinked, trying to focus on this moment but the reality of her life wouldn’t allow it.
About the Author:

Kaira Rouda is a bestselling, multiple award-winning author of contemporary women's fiction and sexy modern romance novels that sparkle with humor and heart. Her women's fiction titles include HERE, HOME, HOPE, ALL THE DIFFERENCE and IN THE MIRROR. Her bestselling short story is titled, A MOTHER'S DAY. Kaira's work has won the Indie Excellence Award, USA Book Awards, the Reader's Choice Awards and honorable mention in the Writer's Digest International Book Awards. Her books have been widely reviewed and featured in leading magazines.

Her sexy contemporary romance series set on INDIGO ISLAND includes: WEEKEND WITH THE TYCOON, Book 1; HER FORBIDDEN LOVE, Book 2; THE TROUBLE WITH CHRISTMAS, Book 3; and THE BILLIONAIRE'S BID, Book 4. Each of these novellas can be read as a stand alone, or enjoyed as a series. Her new series is set in LAGUNA BEACH and includes: LAGUNA NIGHTS, Book 1; LAGUNA HEIGHTS, Book 2; and LAGUNA LIGHTS, Book 3 coming winter 2015. She also helped launch Melissa Foster's The Remington's Kindle World with her bestselling novella, SPOTLIGHT ON LOVE, and is part of Carly Phillips Dare to Love Kindle World with THE CELEBRITY DARE.

For More Information:
Hosted by: