#OutNow: Alternate by Marilyn Almodovar; Chronicles of the Interred 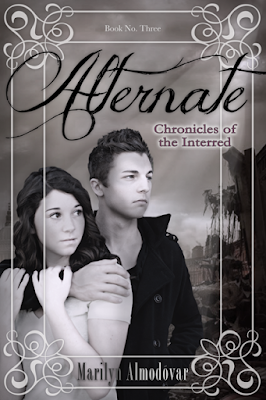 When a portal leaves Baxter trapped and powerless in an alternate world, she finds herself on the run and fighting for her life. The world’s  Council wants to hand her over to Declan, and her only source of support is a broken Alternate Jack who blames her for all he’s lost. Baxter soon realizes that if she’s going to defeat Declan and get back to her world, she’ll have to reclaim her abilities and be stronger than she ever imagined.

Declan and the Absorbers’ Initiative wage war on everyone who opposes them in their hunt for Baxter. Their actions reveal what her future will be like if she doesn’t make some drastic decisions. She knows that one misstep on her part will lead to the destruction of not just this world, but her own.

In a race against Time and bitter enemies, Baxter will discover how much is at stake and just what she’ll have to sacrifice to save those she loves. Can she learn from the fate of an alternate world how to become the Time Bender she’s meant to be?

10 Things you don’t know about Morgan,

1.  Morgan was born in Mayfair, whilst her mother was out shopping. Her mother walked all the way to Mount Street Gardens to use the payphone to call an ambulance, but Morgan was quicker.

3.  Her mother was Headmistress of a school for deaf children in London.

6.  Morgan’s favorite book is North and South by Elizabeth Gaskell.

8.  She lived in Australia for four years, before returning to the UK.

9.  She became head of the Council after her Interment, though Fred has more power than her over it.

10.  Morgan and Fred had a daughter named Constanza, she died when she was four years old.