A Christmas Elf, Mia loves the holiday season, but due to her family moving when her father was a child, she's never been to the North Pole, nor seen a Santa until she joined the PPA. Now she only has eyes for Cole, one of the agency's Claus elves...but she doubts he even knows that she exists.

But Cole has noticed Mia, noticed and very much wants to learn more. If she'd only stop still so he can talk to her, instead of blushing and running off. But the night before Christmas eve brings with it the office christmas party.

And this Santa's decided one shy little elf is very much on his naughty list...

“You know she’s a Christmas elf, don’t you?”

Cole turned at the sound of his brother, Rhod’s, voice and followed his gaze to the petite woman stood at the buffet table. Instantly, every cell in his body perked up to pay attention.

“She is?” He asked in confusion, without taking his eyes off the tiny woman.

She’d joined the agency in the summer, and he hadn’t been able to get her out of his mind. Tiny and curvy, with masses of dark hair that reminded him of roast chestnuts and caramel eyes that sparkled with mystery, she was temptation personified. A temptation he’d have been quick to snap up, except for the fact that she went bright red and ran off every time he tried to talk to her.

Shy was not the word.

“Well,” he said with a shrug. “That explains some things.”

Like the little tug just under his breastbone every time he saw her, and the need to make her smile…to see those sad eyes sparkle with laughter. A Christmas elf without Christmas, without the Pole, was a sad creature. Unlike the Claus elves, who carried Christmas within them, Christmas elves didn’t. They needed regular infusions of the Christmas spirit to make them the happy-go-lucky creatures that nature had intended them to be. The Christmas in him felt her sadness, sensed the void within her, and needed to fill it.

But it didn’t explain other things. Like the need to wrap his arms around her, or the need to find out if those plump, bee-stung lips tasted as good as they looked. It certainly didn’t explain the red mist that wanted to descend every time she smiled at another man. Those were down to good old primal instinct, and the fact he thought she was as sexy as hell.

He tracked her with his eyes as she moved around the room. Small groups of people parted to welcome her, and Cole had to grit his teeth as Darrick, one of the pixie operatives, casually looped an arm around her shoulders. He could tell from the set of her body she wasn’t comfortable with the casual touching.

“If you want her,” Rhod bumped Cole’s shoulder with his own. “You better make a move before Darrick does.”

The door open behind her, a blast of music and the sound of voices erupting into the silence for a few moments before it swung shut. She half turned, and smiled as Darrick, an operative whose cases she often dealt with, strode towards her.

A pixie with a shaven head and a thing about leather, he was as handsome as all hell. The kind of sharp-edged, dark and brooding look she often saw on billboards and movie posters. Darrick wasn’t a movie star though. He was one of the best bodyguards the PPA had. For all his good looks though, and his non-too subtle flirting, there was no answering flutter of excitement in her chest.

Honestly girl, like a Claus will be interested in you, she told herself as Darrick came to stand beside her.

“Little lonely out here,” he slid her a sideways glance and a hot look. “Thought I’d come and stop you getting cold.”

She opened her mouth to answer, but didn’t get a chance. Before she could speak a rough male voice interrupted.

Both she and Darrick spun around in surprise to find Cole stood behind them. Her heart lurched, then stuttered, and she put her hand up to her hair to smooth it. Almost instantly she realized what she was doing, primping and preening in front of him, and dropped her hand like it had been burned. Shit, now she looked like an idiot.

“Christmas elf?” Darrick’s brow puckered in surprise. “No, no, no…she said she was a winter elf.”

Both men looked at her, and she shrugged. “Christmas elf… Winter elf, same thing.”

It wasn’t, and a little light in Cole’s eyes said so but he didn’t correct her. She blushed again, dropping her gaze as heat shivered through her veins. He only had to look at her, and her senses went haywire.

“Well, thank you for that nugget of information,” Darrick said waspishly, wrapping an arm around her waist. “Don’t let us keep you.”

“Get your hands off her,” Cole growled, stepping forward with murder in his eyes. His gaze dropped to where Darrick had his hands on her. But the pixie didn’t let go, forcing her to pinch his arm. Hard. Startled, he looked down at her.

“Let go,” she ordered, her voice firm. She knew most people saw her as the shy one, but she wasn’t, not really. She just didn’t like to interact with people she didn’t know well. But she could be firm, and confident. Like now. “I’m okay. Cole and I are practically family.” 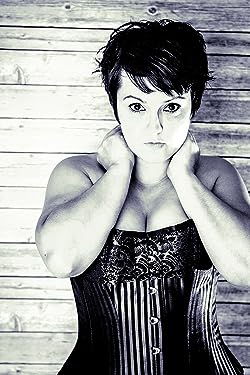 Farthing of Middle Earth (otherwise known as the Midlands, England) and spend her childhood learning all the sorts of things generally required of a professional adventurer. Able to ride, box, shoot, make and read maps, make chainmail and use a broadsword (with varying degrees of efficiency) she was disgusted to find that adventuring is not considered a suitable occupation these days.

So, instead of slaying dragons and hunting vampires and the like, Mina spends her days writing about hot shifters, government conspiracies and vampire lords with more than their fair share of RAWR. Turns out wanna-be adventurers have quite the turn of imagination after all...

(But she keeps that sword sharp, just in case the writing career is just a dream and she really *is* an adventurer.)

The boring part: A full time author and cover artist, Mina can usually be found hunched over a keyboard or graphics tablet, frantically trying to get the images and words in her head out and onto the screen before they drive her mad. She's addicted to coffee and would like to be addicted to chocolate, but unfortunately chocolate dislikes her.