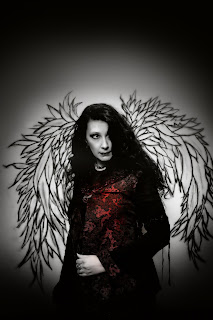 Claudette Melanson writes & edits in Guelph, Ontario, with her husband Ron and four bun babies: Tegan, Pepper, Butters & Beckett. She graduated from Indiana University of Pennsylvania with a BA in English and an MA in Literature. She's wished to be a Vampire since age five. She hopes to one day work full time as an author, since there are many, many books living inside her head.

In her spare time she enjoys watching Japanese Anime and reading vampire stories....along with other great fiction. She is also very interested in good health and is an advocate of Ketogenic eating, using whole and natural foods. Her favorite foods are bulletproof coffee, cashew flour crust pizza and treats made with xylitol and almond, coconut or cashew flours.

Future dreams include writing many more books and spending more time with her son Jacob. Her biggest dream is to make Universal Halloween Horror Nights a yearly event with hubby and son. A Rabbit Rescue fanatic, she also hopes to help rescues all over the world save many innocent lives. 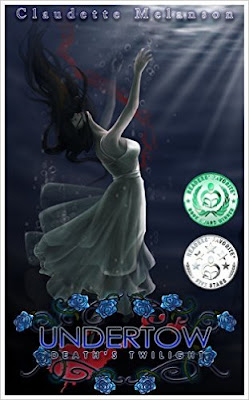 Maura finally found the truth she was always seeking…or has she?

After being left in the dark for all of her life, Maura’s father, Maxwell, has finally returned to reveal sinister family secrets Maura could never have dreamed possible—including his revelation that she is one of The Born. But his daughter soon discovers both he and her mother are keeping pieces of her reality hidden, still. As Maura struggles to unravel the mysteries surrounding her new existence and discover every piece of the cryptic puzzle, life appears intent on casting stumbling blocks across her path with every step forward.

Tragedy seems to stalk Maura, and those around her, as she stumbles along, altering the young changeling’s family, just when they have all come back together. The changes left in its wake could be for the better, or may threaten their existence, entirely.

With the arrival of Christmas comes the opportunity for Maura to draw close to everyone she loves—and finally reunite with Ron, the man she loves. But permanence has always eluded her, and in her current state of flux this pattern endures, as fate seems intent on snapping the threads that bind her to those she holds most dear. Maxwell’s good intentions pave a road for Maura, littered with misery, while her mother, Caelyn’s, desire to shield her family from pain may tear her away from them, altogether. The perfect happiness in the young vampire’s grasp is so easily swept away and dragged under, out of reach. Can Maura erupt from the darkness and confusion to break the surface and find the life she’s always dreamed of?

In the midst of chaos, assistance materializes in the form of another of her kind—ephemerally beautiful, yet explosively volatile, this new vampire may prove capable of unlocking the puzzle-box Maxwell seems intent on securing from her sight. Maura will discover the darkest parts of herself in her quest to understand the being she is destined to become. Her newfound friend has some shady intentions of his own—such as thwarting the love that has grown between Maura and Ron. Following in the wake of the impulsive vampire’s misguided instruction may further pull a naive Maura down into the depths of ultimate despair, heartbreak…and even destruction.

Time For a snippet!


He wasvbeautiful.  His eyes were a soft grey, and the way they sparkled in the
moonlight was heartbreaking.  The moonlight filtered down through his  hair, and I could tell that it was a pale brown that was nearly blonde  where the light shone strongest.  But woven through were strands of  silver, throughout.  Not grey—silver—very nearly like Christmas tinsel.   It whispered back from his pale face, gelled into spiky shards.  He was grinning down at me, his fangs distended behind perfectly symmetrical  lips.  Maybe he did intend to make a meal of me. I realized I was staring open-mouthed.  He chuckled.  It had a dark ring to it.
“Scared, Little Changeling?” he murmured.
“No,” I lied in a whisper.
He leaned in, bringing those deadly fangs closer to my throat.  An image  of Ron burned behind my eyes coupled with a stabbing pain.  My arms came up to cover my head, and I gritted my teeth, wanting to scream  instead.  I didn’t want to see my own death coming, so I clamped my eyes shut.
When I opened them again, he had pulled back a considerable distance. He stared down at me with a puzzled look on his face.  “You don’t really think I’m going to…”  His eyes narrowed, and then assessed me in silence.  I was still incapable of speaking.