Disclosure of Material Connection:  I received this book for review from Masquerade Book Tours and the author.  I was not compensated nor was I required to write a positive review.  The opinions I have expressed are my own.  I am posting this in accordance with the Federal Trade Commission's 16 CFR, Part 255:  "Guides Concerning the Use of Endorsements and Testimonials in Advertising". 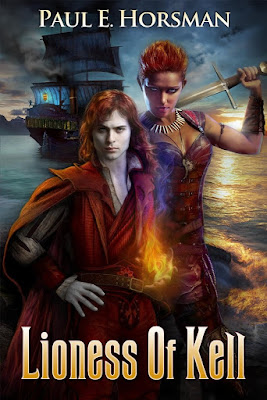 Secure in his position as the Prince-warlock’s son, seventeen-year-old Basil is content with his solitary life of study and magic. He has a comfortable set of rooms in his father’s tower, he has his books and scrolls, and he is perfectly happy. Until the Warlockry Council summons him, and their demands sets his whole, safe existence tottering. Scared and unsure, he decides to run, and takes the first ship out of town. On board he meets Yarwan, the handsome midshipman, who awakens feelings he never knew existed.

Maud of the M'Brannoe, at eighteen already a mighty warrioress, is about to graduate as a Lioness, a special duty officer answering to the Kell Queen and no one else. The Prince-warlock asks her to fetch a certain boy from a pirate town, who could be double for his son. On their way back, someone sabotages their airship and the two find themselves marooned in an ill-reputed forest. Together, the young lioness and Jurgis the lookalike battle their way to the coast and a ship home, while finding solace in each other’s arms.

A spirited fantasy story of high adventure and romantic love in a world where both magic and early modern technology flourish.


Maud is on a mission with her mentor.  Basil is an unhappy young man and Jurgis is considered beautiful for a boy.  This is just three of the many characters that you will meet here.  When looking up my tags for this book, one word not mentioned was adventure.  If you love science fiction, you’ll enjoy this science fiction adventure with some suspense added into the mix.

The author gives each character their own distinct personality and it’s interesting to see how they meet the challenges that the author gives them.  It is over 400 pages so don’t feel that you have to read it in one sitting.  The hardest part you may have is finding the perfect stopping point.  Another part that might be hard is finding the perfect reading spot – especially since their world doesn’t exist.

The author creates a world that you can picture actually being somewhere in the universe.  I could also picture this as a video game.  As you read and visualize, see if you can’t see Maud going through the game and getting out of everything you put in her way.  It may be considered a YA book but only you can decide at what age this is appropriate for.  Only you know your own child and what you want them to read. Once the book is done, the next thing you have to decide is which book of his you’re going to read next. 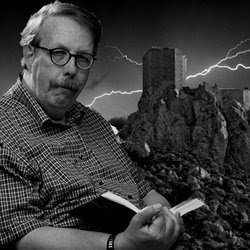 Paul E. Horsman (1952) is a Dutch and International Fantasy Author. Born in the sleepy garden village of Bussum, The Netherlands, he now lives in Roosendaal, a town on the Dutch-Belgian border.

He has been a soldier, a salesman, a scoutmaster and from 1995 till his school closed in 2012 a teacher of Dutch as a Second Language and Integration to refugees from all over the globe.

He is a full-time writer of light fantasy adventures for Y.A. and older. His books are both published in the Netherlands, and internationally.

Where to find this author:

There is a giveaway for this tour for a $25 Amazon Giftcard, courtesy of the author. Ends 8/21.