Psychology postgrad Evelyn Maier eschews men and sex. Her joy’s in work and travel—like her upcoming trip to Africa. But her vacation is cancelled when she inadvertently enters a dangerous, illicit sex game. Without warning, she finds herself ensnared by a smoldering Dominant who pulls orgasms from her nearly against her will.
Mason Brady has suppressed his Dominant nature ever since a disastrous relationship that left him broken. But when his brother convinces him to rejoin The Chase, the sprawling game of domination and submission Mason founded years before, he relishes the role. Until he captures Evelyn, an unwitting passerby.

Now Evelyn is crying rape, and Mason is racked by guilt. He’s certain he’ll convince her it was a misunderstanding, but he must hold her until she trusts him. Evelyn has her own angle: she’ll play along with Mason’s kidnapping until she’s fooled him into believing she’s forgiven him. Then she’ll seek her revenge once he releases her.

In the ensuing game of cat and mouse, they ride the lines between capture, consent, and love. 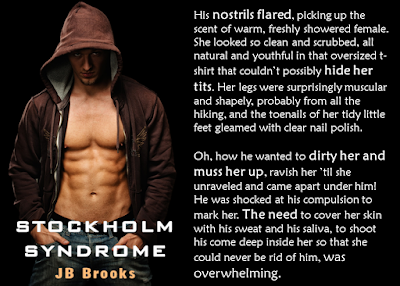 My Thoughts:
Evelyn Maier is going on a trip.  Mason Brady’s gets a ribbing from his brother.  These are two people that you can’t picture ever coming together.  But the author creates an interesting scenario that I can actually see taking place.   And it’s that scenario that brings Mason and Evelyn into contact with each other.  The author also had me wishing that I had gone away to school.

The one disappointment I had was that I couldn’t find out if the author is going to write Owen’s story.  I guess the only was to find that out would be to follow her.  If you stop by her site you can also check out the other books that she has written.  If there comes a time where I just want to sit down and read something hot and sexy, I know just the book to pick up and read.
Excerpt:

“For god’s sake, Owe, why won’t you just drop it? I’ve been telling you all afternoon I don’t do that anymore!” Mason Brady glared at his brother in frustration.
“Don’t do what anymore, Mace?” Owen’s voice dripped with sarcasm. “Dominance? Have you gone all sweet vanilla? Or do you mean sex in general?” He clutched at his chest theatrically. “Don’t tell me you’re too old! Can’t you get it up these days?”
“Fuck off, Owen! You don’t know shit about my personal life.”
At twenty-five, Owen was ten years his junior, and, in Mason’s opinion, overdue for a thrashing.
“What fucking personal life?” Owen hissed. They were drawing curious stares from the other patrons in the coffee shop, but that didn’t seem to deter the idiot in the least. “You don’t have a personal life! You hide away for months on end at that ranch of yours and work. We only see you two or three times a year, and you haven’t had a girlfriend since bitch-from-hell Bianca dumped you. When was that, three years ago?”
“Four. And you know damn well that I dumped her.”
“Not fucking quickly enough!”
He couldn’t believe that Owen had the nerve to bring up Bianca. That topic was not open to discussion.
“It’s none of your damn business! And not relevant either. You just can’t take no for an answer.”
“Oh please, Mace, anyone can see that you’re still fucked up over her. So fucked up that you’re scared of women! And you’re no fun anymore—all work and no play!”
“That’s bloody ridiculous! You know what I am. How can a Dom be scared of women? Just because I don’t want to play your stupid game—”
“It’s not my game—you invented it! You’re a fucking legend. Some of the guys have changed all their travel plans to be here, just to hunt with you. We’ve got the biggest crowd ever, and you’re acting like you’re too fucking good for it all!” Owen leaned over the table. “Please tell me that you haven’t really stopped feeling it. God, how can you crave the thrill so much and then just stop, unless…” His face turned pale. “Fuck, Mace, is there actually something wrong with you? Please, you can tell me—”
Mason cut him off. “There’s nothing wrong with me, Owe. I’ve just grown up. I’m more aware of the…dangers.”
But still he felt the craving, yearning for the thrill, like a junkie who’s been clean for years but still fantasizes about taking another hit. He’d tried not to think about it too closely all day, but Owen’s persistence was getting to him. His cock was throbbing behind the zipper of his jeans.
“How many people are in tonight?” he asked, unable to resist.
“Thirty-two of each. That’s all the guys, but there are still about seven women on the waiting list. If you join us, we can let in another girl too.”
“Shit, that’s huge! Sixty-four people. We started with two guys and four girls.”
“Sixty-six if you’re in.” Owen seemed to sense his weakness. “We don’t do it with uneven numbers anymore. It’s one of the rules. Then every guy catches one girl, and there can’t be any confusion.”
He signaled to the waitress for a refill and remained silent while she poured filter coffee into their cups. Mason looked at her shapely legs as she leaned over the table. Her little skirt crept higher. He fought the urge to put his hand on her thigh and squeeze her soft flesh. Thinking about The Chase always got him sexed up—the screams, the running, the adrenaline. Fucking a struggling woman into submission, and then ecstasy, was a glorious experience—for both of them. He shifted in his chair, trying to get comfortable. Owen looked on with amusement.
“Come on, Mace! You know you fucking want to. It’s just a bit of harmless fun. When was the last time you got laid?”
“More recently than you, I’m sure,” growled Mason. “All right, I’ll do it, but stop with the goddamn personal questions!”
“Deal!” Triumphant, Owen went on, “The Chase starts at nine, but we meet at seven to sign The Pact and go over the rules. Let’s go home and shower, and grab a bite for dinner. Have you got a black shirt?”
“Yeah, why?”
“We wear black shirts. The women wear white ones—makes them easier to see in the dark.” He grinned. “Come on!”

JB is an ex-South African and lives with her extended family in Queensland, Australia's sunshine state. She feels privileged to coexist, in relative peace and harmony, with her husband, daughter, parents, grandmother and two slightly crazy ex-racehorses. She loves to write - anytime, anywhere - and could not survive without the techno-gadgets which make this possible.

JB is a firm believer in lust at first sight, and love ever after.