In a world of shadow, can one hero shine

When scandal and disgrace fall upon the Order of the Conclave, Bastian and his Order are forced to hide who they were once proud to be. Cast out, shunned and scorned by those who were once honoured to use their services, Bastian and his men are left with no choice but to become mercenaries. Moving across the Five Kingdoms, they restore peace for coin, shedding blood for others’ gain.

Tasked with the job of escorting a noblewoman and her handmaiden across the Sand Seas, Bastian soon realises not all is as it should be. Something evil poisons the lands, as whispers of revolt and rebellion are once again murmured among the courts.

In the halls of his Order, Bastian is entrusted with a mission. He knows this shouldn’t be his fight, but the duty to his Order, his comrades, and his mysterious travelling companions weighs heavily on him.

The mission is so dangerous and deadly only a fool would take it…and only a coward would refuse it.

Ava is a huge fantasy fan and grew up reading stories that captured her imagination and took her on journeys of action and adventure. Her favourite stories to write are ones where the possibilities are endless and reality is what she creates. Ava favours the grumpy, sometimes reluctant hero and the fearless, usually sarcastic heroine.

Ava lives in the North East of Scotland with her significant other, Mr M. When not writing, Ava adores all things ean Winchester, quaffs coffee like a champion, and still has no idea what a dangling modifier is. She is quite fond of a cliffhanger though... 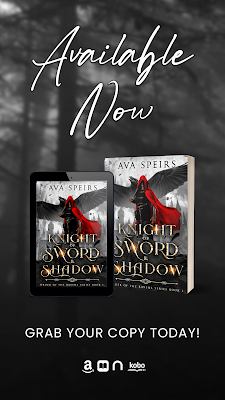