Meet the Order of the Black Oak: a powerful order of modern-day warriors fighting evil to protect the ones they love.

Son of an ancient vampire and a legendary French witch, guilt-ridden Mont-Royal Immortal Valerian St-Amand must team with a powerful New England witch to protect his city from a crazed scientist seeking immortality. But as his well-guarded heart softens for Maisie Thibodeau, their quest to eradicate true evil from the streets of Montreal destroys any hope of everlasting love.

If you love loyal tough guys with hearts, satisfying slow-burn paranormal romance and safe Happily Ever Afters, then the Black Oak World is for you.

“5 stars – Fantastic series of action, magic and awesome romance. You will fall in love with the characters and feel you are right with them.” 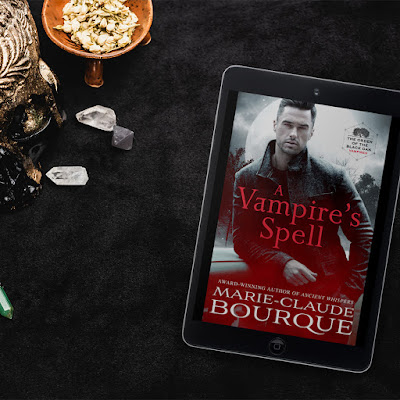 A creature. Val tightened his fist.

She hadn’t said the word, he had. But he knew that was what witches and warlocks thought of him and his brothers.

And while he couldn’t care less about the opinion of others, he was expecting more from her. But no, she was only here to study him.

As he grimly stood in the Sanctuaire’s chapel, he watched her pour over a giant paper map of the city. She had stretched it over the altar, bordered it with five black candles and speckled the surface with anvil dust mixed with bone powder. A handful of railroad spikes and the hypodermic needle that had pricked Emmeline lay at the center.

His mind was on the witch instead of whoever had been after his blood.

He just couldn’t let it go. A future high priestess. Sounded like Marianne Thibodeau had forgotten to mention a few things about her granddaughter.

It shouldn’t matter. Really. Already her essence was fading from his veins. The gentle touch a waning memory.

Yet here she stood above the map. Her jet-black hair tied into a loose braid fell over one shoulder, the thick strand ending just at the tip of her breast. The small and high curve was much too defined under the small black t-shirt. The fabric of her top thin enough that he could make the outline of a small push-up bra.

Stop it, diable! Focus on the job. His balled fists and pained breath didn’t go unnoticed.

“You need to feed, Valerian.” Father Grégoire was right beside him, a heavy hand on his shoulder while his eyes went from Val to Maisie. The priest knew exactly how the immortal felt, the woman drawing both a surge of lust and hunger deep within him. His insides twisting and growling.

Val lifted a defiant chin at his friend. “We have time.”

Marie-Claude Bourque is a Seattle-based author of gothic paranormal romance and the winner of the American Title V award with her first novel ANCIENT WHISPERS.

Happily Ever After always absolutely guaranteed!