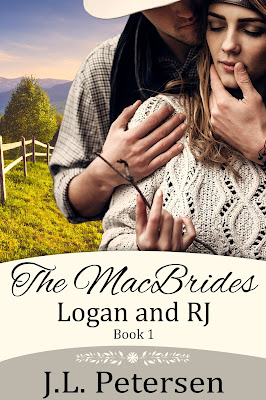 Logan, the eldest of the MacBride clan, is thrilled at his brother Clay's pending nuptials to Sandy. But when Sandy's sister RJ arrives at the family's ranch, Logan's world is turned upside down.

However, the sisters' shared past has created scars and barriers against love testing Logan's ability to push aside his need and patience to win RJ's trust and ultimately her unwavering love.

“Is that all you’re going to eat?” Logan asked.

She frowned down at her plate. It had a hamburger with no bun, a helping of potato salad and some baked beans. “Yes, is that a problem?”

“Nope, just never understood why women don’t put their hamburgers on buns.” He shrugged, causing their shoulders to brush together slightly, then started eating.

The man made her nervous. That kiss rocked her system and she was still trying to recover. Deciding to ignore him, she turned her attention to the rest of the discussions going on at the table while she picked at her food.

She was truly enjoying the family meal. This was nothing like the family meals her family had. Which was a good thing. She was lulled into relaxing when a discussion about some ranch operations between Logan, Clay and Brand got heated.

As the argument got louder, RJ felt the old tension seep into her, washing away her good mood. Her stomach tightened into a knot. She put her fork down and clasped her hands under the table. Sandy caught her eye, smiled, mouthing, it’s okay. Nodding at her sister, she tried to relax. When Logan reached over under the table to lay his hand over her clenched ones, she almost jumped out of her seat.

“Are you okay?” he whispered in her ear.

Taking a deep breath, she found she could only nod at him. He didn’t say anything else but pushed his hand between her two firmly gripped ones sliding his fingers between hers and fully clasping her hand. He gave it a squeeze and then just held tight.

“Alright boys, you can decide the best option later. We have wedding plans to discuss. There’s only seven weeks and lots to do,” Bea instructed.

“Ha!” Sarah snorted. “You jackasses can hardly make it through any meal without butting heads.”

“Hey, who are you calling a jackass, oh sister of mine who has an opinion on everything?” Clay tossed back at her. RJ started tensing up again and without realizing it squeezed Logan’s hand. She went into complete shock when Sandy jumped into the fray. Sandy always shrank away from these types of conflicts.

“Now, Clay, you’re giving my sister a bad opinion of you.”  At that, everyone cast their eyes towards RJ, but Clay seemed to have understanding in his expression. With a sly smile, he apologized. “Sorry, RJ. I know you’re not used to us yet. But hopefully, you’ll realize we love and support each other even though my siblings are a bunch of thickheaded, stubborn mules.”

RJ’s eyes widened at his words and then almost popped out of her head as a half a dozen flying objects, namely napkins and hamburger buns, all hit Clay about the same time. There was a moment of silence at the table before she realized she gurgled. That surprised her, but when a full laugh erupted from her, everyone joined in. Clay sat there laughing with a piece of potato salad stuck to his head.