Chelsea is smart, funny, gorgeous, and the best friend I’ve ever had. Ever since she left, I’ve been a wreck. I’ve been focused on keeping my family’s MMA gym afloat while I train and coach fighters, anything to not miss her more. But now she’s finally back, along with her grumpy, possessive cat, and things are weird between us.
By weird, I mean I can’t stop thinking about her in that way. She’s in the room next door, and it takes all my control not to storm in there, sweep her up, and bring her back to my bed. Even stranger, I’m pretty sure she’d be into it.
And this time, I’m not going to stop fighting until we’re more.

Each book in the Fighting for Her series is STANDALONE:

* Until You’re Mine
* Until We’re More 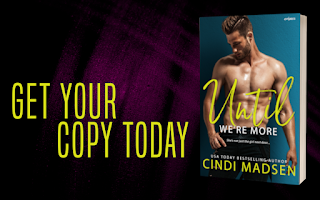 To celebrate the release of UNTIL WE’RE MORE by Cindi Madsen, we’re giving away for a $25 Amazon gift card!

GIVEAWAY TERMS & CONDITIONS:  Open internationally. One winner will be chosen to receive a $25 Amazon gift card. This giveaway is administered by Pure Textuality PR on behalf of Entangled Publishing.  Giveaway ends 9/6/2018 @ 11:59pm EST. Entangled Publishing will send one winning prize, Pure Textuality PR will deliver the other. Limit one entry per reader and mailing address. Duplicates will be deleted.  CLICK HERE TO ENTER!

CINDI MADSEN is a USA Today bestselling author of contemporary romance and young adult novels. She sits at her computer every chance she gets, plotting, revising, and falling in love with her characters. Sometimes it makes her a crazy person. Without it, she’d be even crazier. She has way too many shoes, but can always find a reason to buy a pretty new pair, especially if they’re sparkly, colorful, or super tall. She loves music and dancing and wishes summer lasted all year long. She lives in Colorado (where summer is most definitely NOT all year long) with her husband, three children, an overly-dramatic tomcat, & an adorable one-eyed kitty named Agent Fury.