Disclosure of Material Connection:  I received this book for review from Pure Texuality PR and the author.  I was not compensated nor was I required to write a positive review.  The opinions I have expressed are my own.  I am posting this in accordance with the Federal Trade Commission's 16 CFR, Part 255:  "Guides Concerning the Use of Endorsements and Testimonials in Advertising".

All of Petal, Georgia, is waiting for the last Chase brother to fall. At least, that’s how it feels to firefighter Matt Chase, who’s getting a little anxious himself. His brothers have all found love—why hasn’t he? But fate, in the form of a curvaceous hairdresser, is about to change that.
Salon owner Tate Murphy has come a long way from her trailer-park roots, taking care of her seven siblings along the way. Even though she’s put the past behind her, she knows someone like Matt Chase is way out of her league. But that doesn’t stop her from getting a good eyeful every chance she gets.
When a car accident throws them together, Tate gets more than an eyeful—she gets the whole package. Not that she’s complaining. But when small-town bias and her own insecurities get in the way of their relationship, Matt will have to prove he doesn’t care where she came from…only where she goes.

The Chase is on. One small town. Four hot brothers. And enough heat to burn up anyone who dares to get close. Don’t miss the other books in the series: Taking Chase, Giving Chase and Chased. 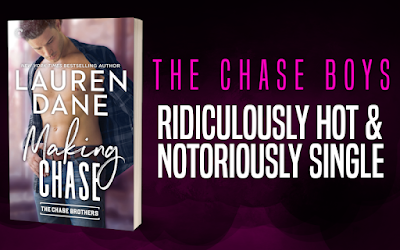 
Tate Murphy likes what she sees.  She’s all about family and will do anything for those that she loves.  Matthew “Matt” Chase is looking for something more.  And that something may have literally dropped into his lap.

Sounds like a simple romance, right?  Not really.  Our author has put in so many twists and turns if you’re not careful you’ll feel like you’ll miss something if you turn away even for a second.  There are moments of sadness too for what Tate has had to endure plus her lack of self-esteem.  There were times where she seems to be the strongest woman and other times she’s taken a real hard kick to an already fragile self-esteem.  What’s sad is that even when she gets a lot of compliments she doesn’t feel like she’s worthy.

Almost from the beginning Matt knows what he wants and nothing and no one is going to change his mind.  He certainly has an infinite amount of patience.  His mother was a pleasure to meet.  She is a true mother hen to both her sons and her extended family.  The author has also included a couple of secondary characters that I’m glad that I didn’t have to see them all that much.   You could feel the difference in the scene whenever they make an appearance – you have to feel sorry for the children.

I went into this story not realizing it is the end of a series.  Knowing that, I didn’t feel that I was missing anything having not read the first three books.  But after meeting Matt’s family I’m a little curious about what I missed.  And the ending of this story left me with a family happy ending instead of just a happy ending for the main characters – which was a pleasant surprise. 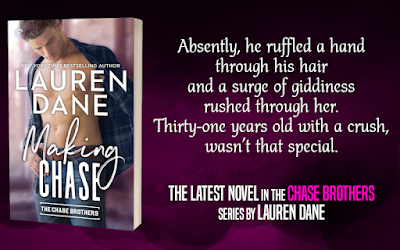 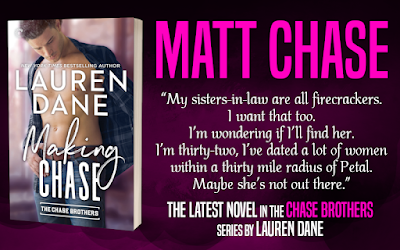 The story goes like this – While on pregnancy bed rest, LAUREN DANE had plenty of down time so her husband took her comments about “giving that writing thing a serious go” to heart and brought home a secondhand laptop. She wrote her first book on it before it gave up the ghost. Even better, she sold that book and never looked back.
Today Lauren is a New York Times bestselling author of over fifty novels and novellas across several genres.