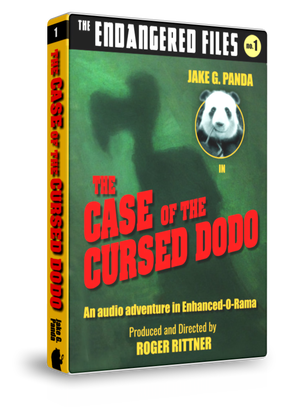 I received this audiobook as part of my participation in a blog tour with Audiobookworm Promotions. The tour is being sponsored by Jake G. Panda. The gifting of this audiobook did not affect my opinion of it.

Listen up. If you're looking for trouble, you've found it. His name's Jake G. Panda and he's a wildlife investigator. This hard-boiled bear works at a flophouse for endangered critters called the Last Resort. He's the hotel snoop. The resident fuzz. It's his job to keep these unusual guests safe and outta harm's way.

This hilarious first installment of The Endangered Files is a wild and woolly mystery involving a missing guest, a green bird, and a bunch of double-crossing critters all hot on the trail of The Cursed Dodo. It's designed to introduce young listeners to the subject of endangered species in a fun and informative way.

So join this tough talking panda detective and a cast of endangered creatures on a globe-trotting audio adventure that will appeal to young and old alike.

Jake G. Panda is a wildlife investigator. A hardboiled Winnie-the-Pooh. He likes bamboo and saving endangered animals. He is the author of The Endangered Files, a mystery series about his misadventures in the protection business.

His partner in crime, the fella who helps write these books because, let's be honest, it's not easy typing with big, clunky bear paws, resides somewhere in New England. He has written his fair share of stuff, mostly for the big screen. And some of it has actually been projected. He likes to keep a low profile and lets Jake do all the talking.

If you could sum up The Case of the Cursed Dodo in three words, what would they be?

Surprising, Fun, Animals
Who was your favorite character and why?

I can't say that I have one favorite character with this one. All of them are needed in order to have this great story come together. They all make the scenes flow from one to another.
Have you listened to any of the narrators’s other performances before? How does this one compare?

Sadly I have not listened to any of them before. But this is an ensemble of great voice actors. They have brought this story to life and immediately had me think of the old radio shows. What a great way to turn off the television and sit back and listen to this group of people perform. Can you imagine if families gathered around said radio to hear what lesson they are trying to get across? This ensemble left me craving more of them and more of this series.
Any additional comments?

There were some jokes that younger ones may have a hard time understanding. But adults not so much. This was one reason that I found this to be a great book to sit and listen to as a family. It has something for everyone. There is a serious lesson here but most children won't understand or would stop listening. But making this like a movie without pictures and using animals is what makes it fun for children.

I don't listen to NPR but I could see having a children's hour and have Jake G. Panda as our host. I never really watched the movie Casablanca but the time period would match perfectly with this story. This is one way you get something for the children and something for the adults. It's a great way for families to connect and learn together. Because of the message it takes all of us so why shouldn't we all listen to it. After listening to the book, I don't think I could go back and read it because I don't think the message would have as much punch. I'm just a big kid at heart so I would enjoy listening to more of Mr. Panda's work.

➜Sign up as a host here
SaveSaveSaveSave
Posted by Lynn's Romance Enthusiasm at 10:13 AM