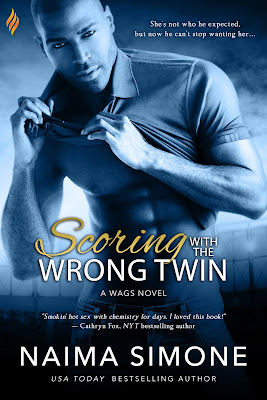 Shy, awkward Sophia Cruz has a hard time telling her vivacious identical twin “no.” But when her sister begs her to swap places for a modeling shoot, she caves … again. Then Zephirin Black walks onto the set. The brooding, aloof, and gorgeous tight end for the Washington Warriors. But she can keep it professional… She has to. Because the adorkable Cruz twin has no luck with guys once they compare her to her sister.

After a bad break-up, Zeph hasn’t been big on second chances—and even less with trust. But he finds himself giving please-call-me-by-my-middle-name-Sophia both. The woman he’d dismissed as a spoiled cover model is different from the first time he met her. Quirkier. Funnier. Definitely sexier. What started as one night turns into another…and another…and another…

Still, Sophia can’t go on keeping her secret from him. But telling Zeph the truth will mean losing him for good. 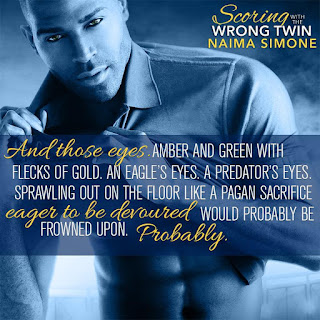 Suddenly needing this photo shoot over—desperate for space—Zephirin set Giovanna gently on the floor. Her delicate fingers with their bright blue polish dented his skin as she clutched his shoulders for a second too long after he’d released her. And fuck it, a goddamn Tibetan monk couldn’t have barred the mental image of those same nails leaving marks on his sweat-dampened skin and flexing back as he drove into tight, hot, wet flesh.

And God knew he wasn’t a monk.

Shifting back a step, he placed that much-needed distance between them before he did something deranged and ludicrous like throw her over his shoulder and christen one of these walls.

“Can we try one more?” She turned to Gerald again, and Zeph ground his jaw, surprised he didn’t breathe molar dust. Her last request damn near killed him. What now?

“You have this.” The photographer waved. “Let’s see what you got.”

When she pivoted toward Zeph again, took a step toward him, he narrowed his eyes on her, suddenly wary. His muscles tightened, preparing themselves for her touch. For whatever she planned—

She sank to her knees in front of him.

No way in hell could he have halted the growl that rumbled in his chest and up his throat. Not with her lowering further into a pose that reminded him of Princess Leia at the “feet” of Jabba the Hutt. Except she faced him, her mouth almost level with his cock. Jesus, if he closed his eyes, he could feel her breath on his flesh even through the nylon of his pants. If God suddenly imbued him with the strength of Samson, Zeph still wouldn’t have been able to control the blood pumping straight to his cock, filling it. Hardening it. And when she tipped her head back, lifting her gaze to him, he glimpsed that knowledge in those chicory eyes. Noted the gleam of arousal. Fucking drowned in it.

Unconsciously, and without her permission, he threaded his fingers in the thick silk of her hair, gripping it. Tugging it. Tipping her head a little farther back.

He caught the soft gasp of breath that escaped her parted lips. Didn’t miss the flutter of her lashes. Or the runaway beating of her pulse within the shallow dip at the base of her throat.

But Zeph didn’t glance up. Refused to free her from his regard. Even when Gerald’s camera started firing away like the rapid pulses of a disco strobe light. Holding the pose and staring down into her upturned face should’ve been uncomfortable; it had been in the past. But with every sense attuned to her—the delicate aroma of her perfume or shampoo teasing his nose; the stroke of her hair against the over-sensitized skin of his hand and wrist; the searing press of her breast against his thigh—discomfort didn’t register. Just the greedy impulse to open his mouth over that fluttering pulse and set his tongue to it. Set it racing harder.

Only when the photographer instructed her to look at him did he allow her to move. But his hand remained tangled in her curls, the cave dweller part of him he hadn’t known existed needing to remind her of his control, of who touched her. Fucking claimed her.

Gone was that gentleman he’d been raised to be. He’d been transformed into this primal being by a woman with sultry eyes, a sex-roughened voice, and a walking wet-dream body.

“I do believe we have everything we need.” Gerald beamed at them, handing his camera to an assistant who rushed forward to take the piece of equipment. “Great shoot.” 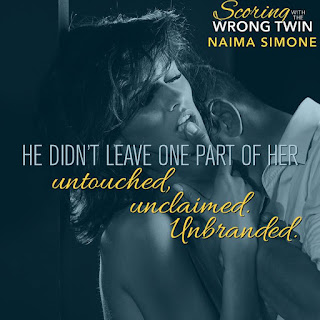 USA Today Bestselling author Naima Simone’s love of romance was first stirred by Johanna Lindsey, Sandra Brown and Linda Howard many years ago. Well not that many. She is only eighteen…ish. Though her first attempt at a romance novel starring Ralph Tresvant from New Edition never saw the light of day, her love of romance, reading and writing has endured. Published since 2009, she spends her days—and nights— writing sizzling romances with a touch of humor and snark.

She is wife to Superman, or his non-Kryptonian, less bulletproof equivalent, and mother to the most awesome kids ever. They all live in perfect, sometimes domestically-challenged bliss in the southern United States.