Disclosure of Material Connection:  I received this book for review from IndieSage PR and the author. I was not compensated nor was I required to write a positive review. The opinions I have expressed are my own. I am posting this in accordance with the Federal Trade Commission's 16 CFR, Part 255: "Guides Concerning the Use of Endorsements and Testimonials in Advertising".

More than love is in the air …

Join the Heartly family as they return to Thorncliff Manor for the holiday season where four sisters and four very handsome, very eligible bachelors, are about to enjoy a lively Christmastime filled with laughter and love. But aside from the covert matchmaking undertaken by the eccentric hostess, Lady Duncaster, the thrill of adventure is sweeping through the estate. Soon, all the guests will be entangled in a treasure hunt for a lost heirloom and secrets hidden for decades will rise to the surface as matters of the heart are finally revealed.

Will Fiona ever see the Earl of Chadwick as more than a friend? Will Emily find an unlikely love in the Marquess of Montsmouth? Can Laura recognize the man of her dreams in the Duke of Lamont? And is Viscount Belgrave able to open Rachel’s eyes to romance? The magic of Thorncliff is about to offer the last unmarried Heartly sisters a chance at their own happily-ever-afters. So sit back with a warm mug of cocoa and lose yourself in a Regency Christmas Romance…

Fiona Heartly reminds the reader how simple things were back then. At Christmas, a lot of things had to be made and not bought in a store. You actually had to talk to someone as opposed to email or text. She’s a woman who doesn’t have a clue. But I’ve answered the clue that this author has left for me. Next time I read this, and yes there will be a next time, I will light a candle to read by. As I read I will also put on some Christmas music – especially since it’s kind of hard to read and sing Christmas carols at the same time – too distracting.

Our author has created several other interesting characters. One such character is Rachel – her smarts shine through. I would love to know the creative process on how this young woman was created. You will understand as you get to know her. She also doesn’t give up anything because she has a man that loves her the way she is.

Then we have Laura who has her own passion. It’s interesting to watch these women once they’re caught in a man’s web – who’s to say that the woman is always the spider. Each woman’s strength garners the attention of a man they feel they’re not worthy of. The more I read the more I have to think about how different our time periods are. People back then couldn’t go into the parlor and watch tv or play video games in order to entertain themselves. They had to find ways to keep their minds and hands engaged.

I’ve had a very rough year but this book reminded me of why I fell in love with the romance genre. All my troubles can disappear even if for only a little while. I may feel down but the author has a great way of bringing me out of my funk and I crave to see where her mystery is going to take me. And my good feelings don’t stop especially when I get my happy ending – I love the sense of family especially at this time of year. It’s also a great incentive to follow the series. 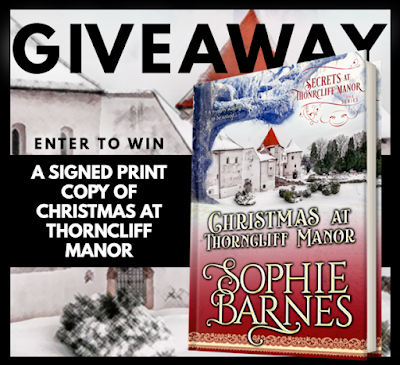 Born in Denmark, Sophie has spent her youth traveling with her parents to wonderful places all around the world. She’s lived in five different countries, on three different continents, and speaks Danish, English, French, Spanish and Romanian.

She has studied design in Paris and New York and has a bachelor’s degree from Parson’s School of design, but most impressive of all – she’s been married to the same man three times, in three different countries and in three different dresses.

While living in Africa, Sophie turned to her lifelong passion – writing.

When she’s not busy, dreaming up her next romance novel, Sophie enjoys spending time with her family, swimming, cooking, gardening, watching romantic comedies and, of course, reading. She currently lives on the East Coast.