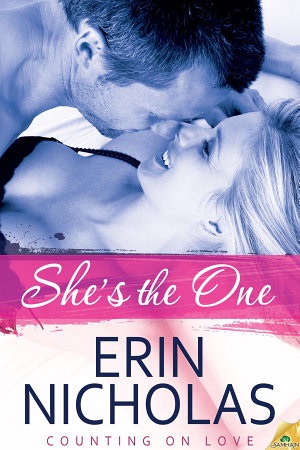 She's The One
Counting on Love Series, Book 1
by Erin Nicholas
Date of Publication: June 11, 2013

Sometimes you see love clearly. And sometimes it has to smack you in the face.
When a stranger walks up and punches him, Ryan Kaye assumes there's a good reason. But he's stunned to learn it's over a one-night stand that never happened —with his friend's sister, straight-laced Amanda Dixon. When Ryan confronts her about the lie, Amanda apologizes, but Ryan realizes he doesn't want her to be sorry…he wants the night they supposedly spent together.
Amanda's not looking to add anyone to her long list of commitments, so she was only trying to let a nice guy down easy by telling him a fling with Ryan broke her heart. So what if the fling only happened in her dreams? But when Ryan Kaye tempts her with the chance to go crazy and fulfill a few fantasies, she can't resist. Thank goodness one night isn't enough time to fall in love…

Warning: Contains a hot paramedic who knows how to get a girl to let her hair down, a girl who thinks she prefers her hair up, some naughty laser tag, some naughty role-playing and a lot of falling in love.

I've been reading romance since my mom first let me into her book cupboard when I was about fourteen. LaVyrle Spencer, Julie Garwood, Debbie Macomber... they took my 'happily ever after' ideas from animated princesses to real people in the real world.
I've been writing romance almost as long. Many a family car trip was spent with my head bent over a spiral notebook in the back seat. I'll confess that my very first attempts at fiction were fantasy and paranormals, influenced by my father's love of the Lord of the Rings, The Chronicles of Narnia, and the original Alice in Wonderland. If Harry Potter had been around, I'm sure he would have been on the bedtime story shelf as well.
But it wasn't long until I started writing about true love and that's where I've been ever since.
I'm so thrilled to be able to share these stories with you! I hope that they make you smile, sigh, maybe even choke up a little. Most of all, I hope that they help you believe in magical things like first kisses, the spark of passion, and the power of true love.