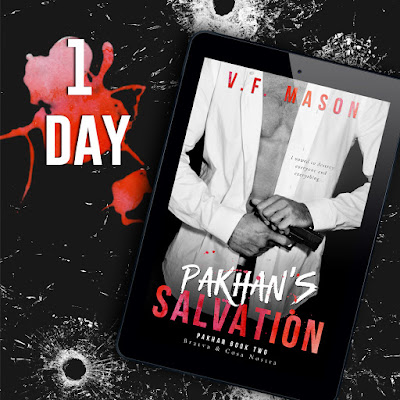 One Day left until the release of Pakhan's Salvation by V. F. Mason.
#MafiaRomance

Rosa
My life changed in the span of twenty-four hours.
My family had tried their best to make my world as familiar as possible yet something about their touch and words always felt wrong.
Only in my dreams, in the arms of the amber-eyed stranger, I found solace.
Until the Pakhan of Bratva showed up, claiming I belonged to him.
Pakhan
Rosa Giovani became mine.
Only I’d failed to protect her from the evil neither of us expected.
Pakhan of Bratva lost the desire to keep his sanity intact and settled in the darkness, so consuming he never wanted to come back from it.
Until we could meet again, I vowed to destroy everyone and everything in my wake for shattering our hearts.

Warning: It is necessary to read first Pakhan’s Rose, before starting Pakhan’s Salvation. This book concludes the Pakhan Duet series. 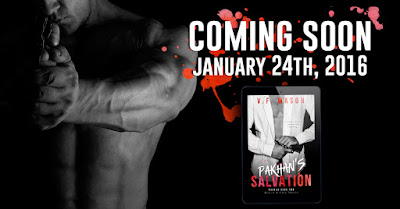 Please feel free to copy and paste this on your platforms to share!

Please help in Supporting  V. F. Mason’s Thunderclap Campaign for Pakhan’s Salvation, Releasing on January 24, 2017.  Just click support and you are done.  Thank you for supporting this author and her upcoming release!

*NOTE: This BOOK is NOT LIVE until January 24, 2017, this is the post that will go LIVE when the Thunderclap goes LIVE!