She wasn’t just a childhood friend; she was his reason for breathing. 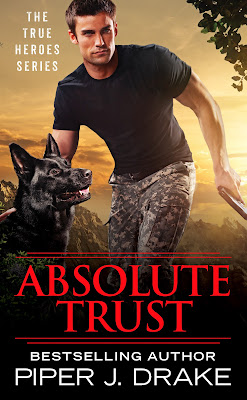 LOVE IS THE GREATEST RISK OF ALL
After multiple tours of duty, Brandon Forte returns to his hometown on a personal mission: to open a facility for military working dogs like Haydn, a German Shepherd Dog who’s seen his share of combat and loss. It also brings him back to Sophie Kim, a beacon of light in his life . . . and the one woman he can’t have. But Forte’s success means he’s made enemies in high places. Enemies who are now after Sophie . . .
When Forte enlisted and left without saying goodbye, Sophie did her best to move on. But with her first love back in town, looking sexier than ever, she’s constantly reminded of what they could have had. Then after he risks himself for her, Sophie realizes she’ll have to put her life in the hands of the man who broke her heart, knowing the danger -and the sparks between them- could consume them both.
Get More information at:

Brandon Forte has a job that has him working with animals.  Sophie Kim will come to rely on that job to help her.  I loved her type of therapy – I’m ready to go.  There’s a mystery afoot and in listening to Sophie she may give some idea as to what is going on but please note that I could be totally wrong.  I never get the mystery figured out until the very end and this is no exception.

That mystery is what makes a good book.  If I figured it out before the author is ready to divulge the secret, why would I keep reading?  I think that would spoil my enjoyment and I enjoyed getting to know the characters as the story developed.  Characters from the first two books in the series make appearances here.  Not at any time did I feel that you needed to have read their stories in order to follow this one.  This book could be considered a stand-alone but if you want to understand how David Cruz, Evelyn Jones, Alex Rojas and Elisa Hall became involved you will have to read their stories in Extreme Honor and Ultimate Courage.

It didn’t take me long to realize that Sophie has a heart of gold and Brandon will do anything to make sure that she’s happy.  One thing I found confusing, at the beginning of the story, was how Brandon was addressed.  Scenes would go back and forth by addressing at times by his first name and others by his last.  Then I began to realize that it depended on if the scene was from Sophie’s point of view or his.  Then it began to make sense due to the fact he is ex-military.  I enjoyed how the author addressed a part of the military that is rarely recognized and that would be the dogs.  They go about doing their job with little fanfare or thanks.  We don’t even think about what happens when they come home – if they even do.  The ending is happy but left me wondering if the staff of Hope’s Crossing Kennel has another story in them.

"With an action-filled plot riddled with suspense and tension, Drake’s latest in her True Heroes series is the best one yet.  Steady pacing, engaging storytelling and genuine, vulnerable characters (coupled with the endearing heroic dogs that protect and love them) make this romance shine." ~ RT Book Reviews

Excerpt from Absolute Trust:
Between one moment and the next, he was right there next to her, kneeling so they were face to face. She let out the air in her lungs in a rush, not sure of what she wanted to do or what he was planning to do. She parted her lips but didn’t say anything, didn’t want to put another question out there for him to address before he answered the one she really wanted to know.
Because she was hoping he was here for her—not his childhood friend—but for the very adult version of her who’d been waiting for him all this time.
Faster than she could react, his lips caught hers. The contact rushed through her in a lightning shot of surprise. Years of bottled-up frustration bubbled up and she leaned into him with a soft gasp.
And then he pulled back and she was left trying to catch her breath.
Slowly, carefully, he slid his arms around her back and under her knees. He cradled her against his chest and tucked her head under his chin. Circled as she was in his embrace, he held her close. He pressed his lips against her hair.
“That was too close yesterday, Sophie.” His voice was low, gruff, and almost cracked with emotion. “The thought of losing you just about killed me.” 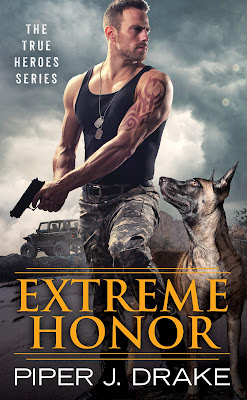 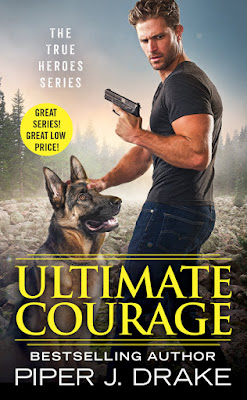 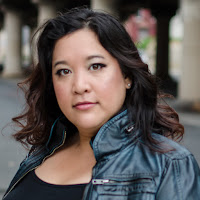 About Piper J. Drake:
Piper J. Drake (or “PJ”) began her writing career as “PJ Schnyder” writing award-winning sci-fi & paranormal romance and steampunk. She has received the FF&P PRISM award for her work as well as the NJRW Golden Leaf award and Parsec award.
Now, Piper writes romantic suspense, incorporating her interests in mixed martial arts and the military into her writing.
Connect with Piper at:


Follow the tour and enter to win a True Heroes prize pack - the complete True Heroes series and swag pack or one of four print copies of Absolute Trust – US and Canada only
Enter at:
a Rafflecopter giveaway