Synopsis: Unmated werewolves don’t normally live past three hundred years old...and billionaire Jack MacGrath is cutting it close. Sure, he has almost everything—the respect of his peers, a mansion in San Francisco, a private jet, and fast cars. But without a mate, Jack's in trouble. Then he sees her. Gorgeous, proud...and his enemy.
Isabelle Connelly is good at hiding things from her father. Like her success as a painter, or the incredibly intense attraction she has to Jack MacGrath. After all, she's royalty and falling for anyone lesser—to say nothing of a rival pack—would be, er, unseemly. Now she must choose between her duty to her family and her pack...or her perfect fated mate. 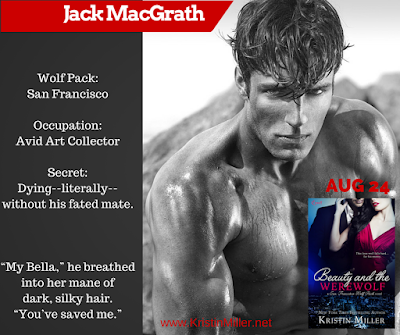 He couldn’t let her slip through his fingers. Not now.
She couldn’t go back to Ireland.
As she hit the gas, jerking the car door from his grasp, he stood and hollered, “I’ll give you the painting.”
Brake lights.
This time, when she reversed, he jumped out of the way. Rolling down the window, Isabelle stuck out her elbow and glared. “What do you want?”
Think fast. Think clear.
“I donated a painting to the de Young museum for its exhibit tonight. They’ve invited me to attend as an honored guest. If you’ll be my date, Werewolf in Venice will be yours.”
It was a small price to pay to add hundreds of years to his life.
“You’ll give it to me…just like that.” She squinted, disbelieving. “If I go out with you. Yet two million dollars wouldn’t cut it?”
“There are some things you can’t put a price on.” He nodded. Only once. “You can even meet me there, if you’d like. It’s black tie. Eight o’clock.”
She didn’t say a word. But as she pulled out of his driveway and slowed around the corner, he knew he’d see her again.
It was all he needed.
It was everything. 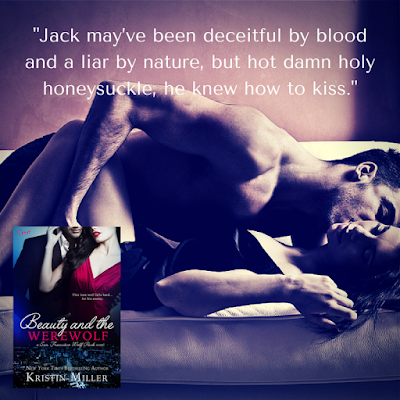 Synopsis: Melina Rosenthal worships at the altar of all things fashion. Her dream is to work for the crème de la crème fashion magazine, Eclipse, and she'll do much anything to get there. Even fixing up the image of a gorgeous, sexy public figure who's all playboy, all the time. Even if he's the guy who broke her heart a year ago...
Even if Hayden Dean is a werewolf.

Since his father's death, Hayden's the heir apparent to the San Francisco Wolf Pack—well, once he settles down. Hayden isn't interested in giving up his partying ways, except he's pretty sure he's found his fated mate, and the fact that she's a non-shifter is bad news. Now he must find a compromise between the traditions of his wolf world and his certainty that Melina is his...before fate (or another werewolf) bites them both in the butt.

New York Times and USA Today best-selling author Kristin Miller writes sweet and sassy contemporary romance, romantic suspense, and paranormal romance of all varieties. Kristin has degrees in psychology, English, and education, and taught high school and middle school English before crossing over to a career in writing. She lives in Northern California with her alpha male husband and their two children. She loves chocolate way more than she should and the gym less. You can usually find her in the corner of a coffee shop, laptop in front of her and mocha in hand, using the guests around her as fuel for her next book.