Buy now on Amazon or

read for FREE with Kindle Unlimited!

Prefer paperback? They are available now!

Haunted by a crushing fear of death, a young Victorian woman discovers the secret of eternal youth—she must surrender her life to attain it, and steal heartbeats to keep it.

In 1860 Surrey, a young woman has only one occupation: to marry. Senza Fyne is beautiful, intelligent, and lacks neither wealth nor connections. Finding a husband shouldn’t be difficult, not when she has her entire life before her. But it’s not life that preoccupies her thoughts. It’s death—and that shadowy spectre haunts her every step.

So does Mr. Knell. Heart-thumpingly attractive, obviously eligible—he’d be her perfect match if only he wasn’t so macabre. All his talk about death, all that teasing about knowing how to avoid it…

When her mother arranges a courtship with another man, Senza is desperate for escape from a dull prescripted destiny. Impulsively, she takes Knell up on his offer. He casts a spell that frees her from the cruelty of time and the threat of death—but at a steep price. In order to maintain eternal youth, she must feed on the heartbeats of others.

How far will Senza Fyne go to avoid Death?

Excerpt 1)
The room faded around Senza, the noise of the guests thinning, the press of the crowd easing. A lone figure stepped into the doorway. The world just fell away, tatters and pieces that faded around her. The only real, tangible thing in the room was that stranger.

For a moment, Senza forgot how to breathe. Who was he?

Tall, but not towering. Nice shoulders, a handsome coat. The cut of the jacket hinted at a pleasant physique, the material gleaming darkly with a hint of silk. His hair was longer than the others wore, dark and smooth and drawn back in a ribbon, although a fringe had fallen loose. The strands hung down in a boyish tumble to frame his eyes, large and black and shimmering like obsidian.

Those eyes were fixed upon hers.

When he noticed her looking at him, he flashed a sharp, secret smile. Nothing boyish about it. That look made something inside her flutter, high up between her ribs. She struggled to draw a breath, her corset suddenly too tight—

And then, he was gone. Disappeared into the crowd. Vanished like a ghost.


Excerpt 2)
He took her captive hand and raised it to his lips, his dark eyes glittering.

A flush warmed her throat, spilling up into her cheeks. Who was he? They hadn’t been properly introduced. He shouldn’t be speaking to her, let alone pressing a kiss to her hand. It simply wasn’t done—

“Will I have the honor this evening?” He released her hand, but held her still with his gaze. That smile again, like he had a secret. Like he knew something about her and would love to tease her with it.

She couldn’t look away. For a moment, she was connected to him in a way she’d never felt before or would ever understand.

“Um—” She stammered, her cheeks on fire. “I’m sorry, I’ve promised the next several numbers.”

“Serves me right for waiting so long, bien-aimé. I will be content to wait for you.” He bowed low, sweeping out a slender hand in an eloquent gesture. “I would wait for you forever.”

A flash of that smile, deeper this time, deep enough to send flutters through her entire body. A smile and he was gone, like smoke on a breeze, like a shadow retreating from the sun.

“Miss Fyne.” Mr. Pembroke stepped through the crowd. “I believe I have the honor. Shall we?”

She nodded, quite at a loss for words, still in thrall of that brief interlude with the man who had no name. His voice echoed through her head, drowning out Pembroke’s polite chatter and frequent admirations for her friend, the darling Miss Keating.

One word repeated, over and over, a heartbeat in her head.

Although the stranger was not to be seen again for the remainder of the evening, Senza danced every last dance with him, even if only in spirit.

Excerpt 3)
“Well?” She tapped her fingers against the bench.

He leaned forward and rested his elbows on the back of her seat beside her. “I don’t think my name would lend a shred of comfort to your state of melancholy.”

She crossed her arms, wishing the church didn’t feel quite so chilly. “Perhaps not, but the security I would gain from a proper introduction would most certainly bolster my sense of propriety.”

“Funny, how people think names are the be-all and the end-all. I didn’t expect that from you, little Miss Shakespearean scholar. Very well. If a name will urge you to be honest with me and, more importantly, yourself, I’ll give you a name. You can call me…” His voice drifted off, as if he were thinking of something, and he settled back into his own seat.

“Mr. Knell.” He sounded pleased with himself, as if he enjoyed a private joke. “Most fitting, n’est-ce pas? Now that we are such intimate friends, I feel perfectly within the realm of propriety to confide that I know something that would distract you from your lonely endeavor.”

Curious. She cocked her head, only to turn an ear toward him. “Which is?”

He leaned over the bench, his face close to her ear. “Have you ever been to Woking?”

She hadn’t. But without hesitation she rose to follow him when he got up to leave, knowing that she’d most likely be visiting Woking, and very soon.

A quiver of worry stirred deep inside, a protest that she would leave decorum and proper behavior behind for the sake of this stranger. She quelled it with a firm resolve. She’d follow Mr. Knell into Hell if he’d been of a mind to go.

That wasn’t a good thing. But it didn’t stop her, either. 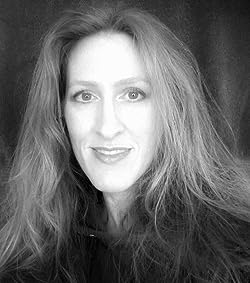 Ash Krafton is a writer of all things spec fic. She believes spectacular endings make the best beginnings... Why not? One billion black holes can't be wrong.

The second bravest thing she's ever done was volunteering to go first when her Girl Scout troop visited a High Ropes challenge course somewhere back in the eighties. (Thankfully, few photos exist.) The third bravest thing was wearing her purple Colin Stuart boots with the extreme stiletto heel to her kids' school open house one year. (Three floors, all steps, no brakes.) The top of the Brave Things list, however, remains to be written.

Ash can also be found:

And writing as AJ Krafton:

http://infiniteinkauthors.com
Posted by Lynn's Romance Enthusiasm at 6:00 AM