#BookBlitz: The Three Kitties That Saved My Life by Michael Meyer

Read for FREE on Kindle Unlimited...

A true story of love - a four-time Amazon best seller
I thought that I would never be able to love again after the tragic death of my wife, my partner in life. I was wrong. I do. I fell in love with Kitty and two adorable rescue cats. This is the true story of my journey from love and loss to love once again. My story begins with loss and tears, but it ends with lots of love and laughter.
Love was then.
Love is now.
Love is forever.
"This story will touch you, and you'll be telling your friends about it long after you've finished....Please buy this book and absorb it into your own life's experience. It will make you a stronger person." - T.R Harris, bestselling author of THE HUMAN CHRONICLES SAGA.

"It is one of the most moving books I've ever read. I cried very hard in the early part and rejoiced with the author through the rest." - Nick Russell, bestselling author of the BIG LAKE series

"Sometimes after finishing a book, I will feel something like emotional awe. It is a rare thing, but The Three Kitties gave me that feeling."

"Mike Meyer pens a tender tale of love, loss, and renewal. The depth of emotion is palpable...The Three Kitties will tug at readers' heartstrings, as they ride through the emotional highs and lows of Mike Meyer's remarkable story." - InD'tale Magazine

"It's so remarkably well written that I just couldn't put it down. It was one of those tear jerking, heart stopping, soul stealing, and mind blowing stories that had me up for several hours into the night. I actually read straight through, that is how intense and addicting this story was."

"This is like drinking tea and honey on a cold day."


"This uplifting memoir salutes Coco, Pom Pom, and Kitty -- three angels that rescued the author from his demons and taught him to live life to its fullest." - Bookbub

“I sure love my new home,” Coco purred at me, as I rubbed gently at his backside, which seemed to put him back in seventh heaven. He was loving every second of everything in this new world. “Thank you,” I knew he was saying to me. “Thank you for rescuing me and for giving me such a great new home.” He closed his eyes as I continued rubbing him the way he seemed to love. “Thank you for taking me off the street,” I could hear him tell me. And then came the clincher.

“Thanks, Dad!” I distinctly remember hearing him purr.

I knew that her feelings for me were those that I felt for her. That was obvious. The two of us had clicked from the very start, and passion was in the air. It was clear what we both felt for each other.

But she had a date. I had no idea what that meant, but I hoped—longed—really.

We stood in my driveway just before she got into her car. It was July 10th, less than a week past July 4th, and as I bent down and kissed her, believe it or not, fireworks went off in the distance.

It was an omen.

She looked up at me. I knew she knew that I knew, and I knew that she knew. There was a magnetic connection between us, something unbreakable.

But she had a date.

She waved at me as she drove away, and we both blew kisses to one another. The whole night had been so magical.

But there was an 800-pound gorilla in our midst: Kitty had a date that night.

My journey has been a long one, a difficult one at times, but it has a happy ending. The three kitties in my life have made it so. They have all helped me to become the happy-to-be-alive man that I am today. I now accept rather than cope. I live each day to the fullest, knowing full well that life is a gift, and a very precious one at that. I look back on my life and I often think that I must be the luckiest man in the world. I have so much to be thankful for. The wonderment and beauty of life are both so dear to me.

And, to add a delicious icing to the lovely taste of my life, I can say with total honesty to the whole world, my voice booming into the sky, my dancing feet not caring in the least who might see me, that I have been very fortunate to have done something that brings more sheer delight and wonderful pride to me than anything else that I have accomplished in my life: I have fallen madly, heads-over-heels in love not once, but twice, and how many others can say that? 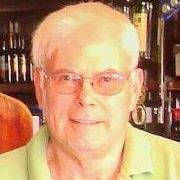 Michael Meyer is the author of mysteries, thrillers, humorous fiction, and non-fiction: Love and romance, laughter and tears, thrills and fears.

His CONTEMPORARY/HUMOROUS FICTION COLLECTION currently has two books: THE FAMOUS UNION, Book One; and THE SURVIVAL OF MARVIN BAINES, Book Two.

THE THREE KITTIES THAT SAVED MY LIFE was his heartfelt attempt to make things right again in his life after his first wife died, and putting this true story of love down on paper worked. It was something that he knew he had to do. One reviewer says of this book, "This is like drinking tea and honey on a cold day."

TRIANGLE OF HOPE was written as a testament to the fact that sheer determination on the part of people can bring about hope in even the most hopeless of circumstances.

THE SIR RODNEY VIGNETTES is a collection of humorous anecdotal episodes in the life of an Old World Charmer, allowing the English professor side of Michael Meyer to come forth.

He has resided in and has visited many places in the world, all of which have contributed in some way to his own published writing. He has literally traveled throughout the world, on numerous occasions. He has lived in Finland, Germany, Thailand, Saudi Arabia (where COVERT DREAMS - INTERNATIONAL SUSPENSE COLLECTION BOOK ONE - is set), and the U.S. Virgin Islands (where DEADLY EYES - INTERNATIONAL SUSPENSE COLLECTION BOOK TWO - is set). He gained the wanderlust to see the world, to experience other cultures, at an early age, and this desire has never left him. If anything, it has only gained in intensity as he has aged.

Among the many unique things that have happened to him in his world travels, he has walked the streets of Istanbul with a detective, searching for a pickpocket who got him good. He has ridden on the back of a motorcycle in Tehran while the driver, who spoke not one word of English, pointed out all the sights to him. He has wrestled an Iranian soldier who tried to break into his hotel room in Tehran. He has had the paint completely stripped from his car as he drove across Saudi Arabia in a sandstorm. He has stood on the stage of a busy nightclub in Tokyo, singing "She'll be Coming Round the Mountain When She Comes" to an audience feeling no pain from the Sake they were drinking. He has been chased by a family of mongooses (yes, that is the correct spelling) on the idyllic Caribbean island of St. Croix. And that is just the beginning of his long list of worldly adventures.

As a recent retiree from a forty-year career as a professor of writing, he now lives in Southern California wine country with his wife, Kitty, and their two adorable rescue cats.

SPECIAL NOTE: COVERT DREAMS has recently received a Compulsion Reads endorsement. For those of you who are unfamiliar with Compulsion Reads, this company specializes in reviewing and endorsing those novels that meet its quality standards based on the fundamental qualities of good storytelling. Many books that the company reviews don't earn their endorsement, so this is a pretty big deal.

Be sure to check out his Pinterest writer's page, which includes numerous audio readings, clips, and trailers of his books:  http://pinterest.com/temmike/#