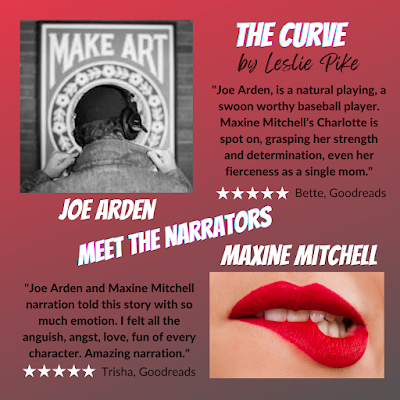 Fun Baseball Facts about The Curve’s Narrators for this #SportsRomance audiobook! 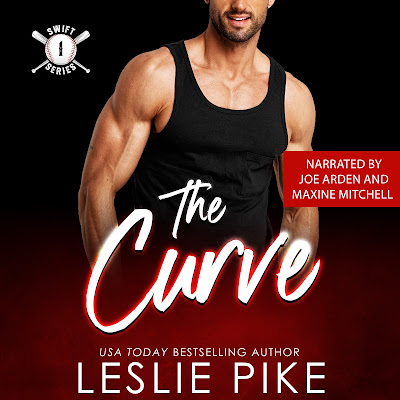 USA Today best-selling author Leslie Pike delivers a delightful romance centering on an athlete and the object of his affection—a single mother.

JOE ARDEN played competitive baseball all throughout his youth in LA. He was a right-handed, power-hitting first baseman for the entirety of his high school and traveling all-star career. One of his teammates from Little League would go on to win a World Series with the St. Louis Cardinals. He hung up his spikes after graduation to focus on acting and soccer.

MAXINE MITCHELL loves to celebrate her birthday at the ballpark. She's rung her special day at Major League, Triple A, and even Single A stadiums over the years! Her favorite pro team is the Cleveland Guardians. Maxine’s tee-ball position was pitcher. (And she has the “baseball card” to prove it!)

I was excited to get this audiobook. I love the author and then having two of my favorite narrators is just a plus. Narrators always do what I can’t - bring the author’s characters to life. This combination made it very easy to get lost in Ms. Pike’s world.

Atticus is a man who knows how to use his charisma to his advantage. Charlotte doesn’t seem to be impressed by his best moves. I like the addition of someone who is very important to her. Now that baseball has started, this is the perfect time to be listening to their story. See, you could have the story playing in your ears as you watch a little league game or even a major or minor league game.

When reading a book, my mind tries to put some inflection into the words that I read but the narrators do a much better job than I ever could. Mr. Arden and Ms. Mitchell make me feel as if I am a part of the scenes. It’s like I’m a spectator to what is unfolding. At one point, Mr. Arden gave me a chuckle as he imitates both kids and Grandma Birdie. Ms. Mitchell does a great job with changing her voice so we can picture what Mallory is feeling as well as Charlotte.

Our author has created a book that will have you wanting to relax – even if it’s just for a little while. It’s a story that could be anyone’s reality. The characters have feelings that any one of us could have. She shows how tough it can be for a sports celebrity – just like us normal people. But family helps to ground them. We even get to see a teenager navigate her life with the help of two people who care about her. The author’s ending has me looking forward to what The Closer may have in store for me.