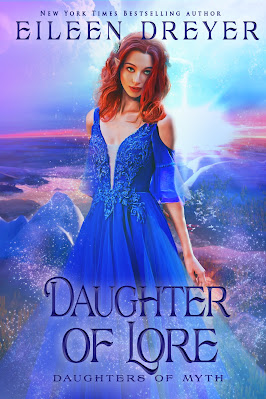 Zeke Kendall doesn’t believe in fairies. He’s a scientist; an anthropologist who has spent the last ten years digging in the harsh deserts of the American Southwest. But things look a lot different in the soft green shadows of Ireland. There it is easier to believe that magic exists, especially when Zeke tumbles off a fairy mound and ends up in the arms of the beautiful Nuala, who seems to know everything about him. When she tells him she is a fairy, he actually wants to believe it, even as he knows better.

Nuala is daughter of Mab, Queen of Fairies. She has grown up in the twilightland of the fae, fiercely loyal and loving to her people. But she has also been in love with Zeke Kendall ever since she first saw him in her scrying water as a child. To now have him so close is both joy and torture.

For she is the heir to the great crown of the Tuatha de Danann fairy clan. She has no place in Zeke’s world. And he, a man drawn in the sharp edges of his deserts, has no place in hers. Even as passion rises and the love she’d only dreamed of blossoms into reality, Nuala knows that a future for them is impossible. And yet, she can’t find a way to send him back to his own world.

Zeke Kendall did not believe in fairies. Not merely a serious scientist but a man of the millennium, he held no truck with ghosties or ghoulies or things that went bump in the night. It didn’t matter that he was standing hip-deep in what was purported to be a fairy glen in the middle of Ireland, where generations had seen, consorted with and recovered from fairies. Even standing in the middle of fairy central, Zeke could say with perfect conviction that he did not believe in the species.

Which was why the sudden sight of the delicate, sloe-eyed woman sent him reeling.

He caught her out of the corner of his eye, the way you would in a dream. Creamy skin that all but glowed in the soft, watery light. Thick, curling auburn hair that seemed oddly dry in the rain. Big eyes. Wide eyes. Clear, laughing green eyes that sparkled at him and then turned away. Eyes he would swear on his grave he recognized from somewhere.

Before he realized what he was doing, Zeke was following her. Splashing in puddles up to his ankles, he shoved aside ferns and fuchsia and oak branches in his haste to catch up with her.

She was in a dress. A floaty kind of silky thing in the most iridescent shade of peacock he’d ever seen. Tantalizing over breast and hip and thigh. Compelling a man who had never had the need to be compelled.

Zeke was no monk. He’d had his share of relationships. He’d been told by people other than his family that he was handsome. Rugged, according to his latest friend, Tina. Wide-shouldered and tall and healthy. He hadn’t needed to beg women to stop for him, nor had he ever particularly felt the gut-wrenching desire to do so.

But suddenly, after the swift, stunning sight of a woman who had laughed at him, luscious strawberry lips parted over perfect white teeth and a toss of perfect copper hair, he was running as if his life depended on it.

And somehow, on a single path to a single stream in the middle of nowhere, he lost her.

Zeke got to the very bottom of the path, all but breathless from hopping boulders, sliding through mud, and ducking under foliage, and stopped. Looked around. Stared hard at nothing.

He was sure he’d seen her. He could almost still hear her windchime-light laugh as she spun away. He swore he smelled cloves. Hell, he could almost feel that silk dress against his fingers.

Where the hell was she?

New York Times bestselling author and RWA Hall of Fame member Eileen Dreyer and her evil twin Kathleen Korbel have published over forty novels and novellas, and ten short stories in genres ranging from medical suspense to paranormal to romance. She is thrilled to have joined Oliver Heber Books to continue her Drake’s Rakes series about Regency aristocrats who are willing to sacrifice everything to keep their country safe, of which Ill Met by Moonlight is a near relative.

A former trauma nurse, Eileen lives in St. Louis with her husband, children and large and noisy Irish family, of which she is the reluctant matriarch. A seasoned conference speaker, Dreyer travels to research, and uses research as an excuse to travel. Oh, who's she kidding? She doesn't need an excuse. She has the Irish wanderlust and satisfies it as often as she can to the point that she has sung traditional Irish music on four continents. She also had the incredible chance to research Drake’s Rakes by attending the 200th anniversary of not only the Battle of Waterloo, but the Duchess of Richmond ball (in period attire). She has animals, but refuses to subject them to the limelight.

Author Links:
Website
Facebook
~~~~~~~~~~~~~
GIVEAWAY:
Eileen Dreyer will be awarding a $20 Amazon/BN gift card to a randomly drawn winner via rafflecopter during the tour.
a Rafflecopter giveaway
Hosted By: