Can't wait for the release? Be sure to vote for SAY IT'S FOREVER as one of your most anticipated March reads on Goodreads! 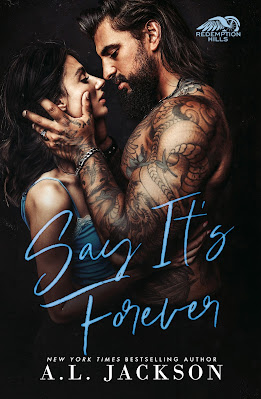 “You matter, Salem. You matter. Look at you, darlin’.”

There was the charm all mixed up with the disorder that was at the heart of this man.

My chest squeezed and the blood thundered through my veins.

“Beauty. The meaning of it.” The words fell on a harsh exhale from his lips, and the air that was barely skating up my throat died right there when he slowly toed off the dress shoes he wore.

Obsidian eyes flashed like a rush of the darkest night, rough as they devoured me from across the space.

Without looking away, he leaned down and peeled the socks from his feet.

I gulped, then I was nearly passing out when he ticked through the buttons on his shirt and peeled that off, too.

The man was nothing but wide, wide shoulders. Muscle everywhere, bulky on his arms and chest, his abdomen packed, tapering down and narrow at the waist.

Most all of his skin was covered in ink that seemed to scream the same as the walls, though it remained indistinct in the minimal light cast down from the rafters.

But I could make out enough to get the intonation.

Menace and peril and life.

The mountain of a man stood there for a moment, then he took a step forward.

Energy rushed across the floor.

It covered me whole and caressed me in shadows.

I was right. This man was definitely, definitely dangerous.

There was no question about it then.

And still, I remained there, held in his gaze, feeling the safest I’d ever felt.

I thought he was coming for me, only he slipped by on his bare feet.

Desire rippled through on his wake.

God, that was sexy, too.

Jud Lawson was an anomaly.

A blinding light in the longest night.

Stealer of heart and sanity and good sense.

Because remaining there on the ground like an offering?

There was no question I’d lost my mind.

His aura rippled through the room as he moved over to the wall that I faced. He pulled an easel closer, and the canvas he set on it looked like it’d been painted over a thousand times. He knelt to open a few jars of paint.

He picked up a brush and studied me.

I trembled beneath his watch.

“Beauty,” he rumbled. “Second I saw you out in the rain. Thought I had to be imagining things. Hallucinating.”

“I was terrified,” I admitted, our voices dancing through the condensed air.

Louder than they should be.

The thrumming of our hearts was palpable.

Frantic beats that echoed against the other.

A smirk ticked at the corner of his sexy mouth, then it slipped when he glanced at me then to the canvas. He began to paint. Quick, sweeping strokes, as if the images fell from him without thought. “I felt your fear, Salem. I felt your desperation. Wonder if I felt it then, that we were bound to be more than strangers. Wonder if I knew you were supposed to be on the back of my bike that night. Wonder if I knew you were going to become something that mattered in my life.”

"If you want a book that will wreck you in the best way possible than grab this UNPUTDOWNABLE, HEARTBREAKINGLY BEAUTIFUL story that will leave you with ALL THE FEELS!" — Melissa, Book Addict Fanatic 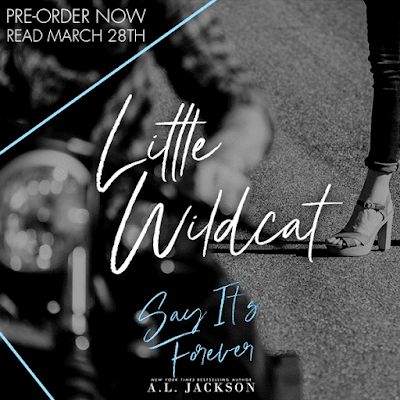 The Alternate Cover is Here!

Not only do we have the AMAZING release boxes up, but the alternate cover is now available to pre-order as well. I am IN LOVE with both covers and can't choose a favorite!

If you can't choose either - I also have hardbacks that feature both!

Want a Say It's Forever Release Box? It includes a signed paperback, premium merchandise, and goodies! This box is even better than the last and I CAN'T WAIT for you all to see what's inside!!!

Quantities are limited and boxes sell out fast, so reserve yours now!

Signed Give Me a Reason & Absolution Gift Set

A.L. Jackson is the New York Times & USA Today Bestselling author of contemporary romance. She writes emotional, sexy, heart-filled stories about boys who usually like to be a little bit bad.

Her bestselling series include THE REGRET SERIES, CLOSER TO YOU, BLEEDING STARS, FIGHT FOR ME, CONFESSIONS OF THE HEART, FALLING STARS, and REDEMPTION HILLS novels. Watch out for her upcoming stand-alone, SAY IT'S FOREVER, releasing March 28th!

If she’s not writing, you can find her hanging out by the pool with her family, sipping cocktails with her friends, or of course with her nose buried in a book.

Be sure not to miss new releases and sales from A.L. Jackson - Sign up to receive her newsletter http://smarturl.it/NewsFromALJackson or text “aljackson” to 33222 to receive short but sweet updates on all the important news. 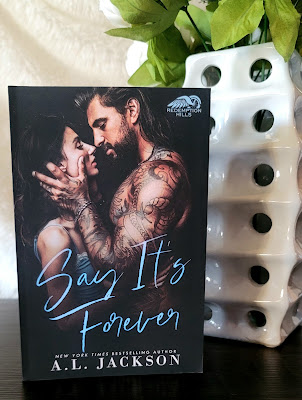