This is the Route of Twisted Pain
by MariaLisa deMora
Series: Neither This Nor That MC Book One
Genre: Adult, Contemporary Romance, Biker Romance
Publisher: MLK Publishing
Publication Date: July 25, 2016

George Bell, aka Twisted, knows the odds are against him. Have been all his life. Born in a Louisiana bordello, raised around the rough and rowdy men of a motorcycle club, he’s never been the lucky type. But he believes luck can change, so when fate gives him a glimpse of breathtaking beauty, he’s more than willing to roll the dice. Chancing upon what could be the woman of his dreams, he’s prepared to push this streak as far as he can.
Penny Dane’s background gives her an edge in the life she’s chosen to lead. Raised in a can-do family, she’s resilient, rolling with life’s punches and landing on her feet. But, when the past holds painful secrets—when a single misstep can turn deadly—can she trust the passion this man stirs in her?
On the surface, Bell and Penny don’t work. Their mismatched worlds are too different. But like a backwater bayou, what you see is not the whole story, there are mysteries buried underneath. Penny is the red-haired beauty caught up in a web of lies. Bell is like no one she’s ever met before. The problem is, he knows it. 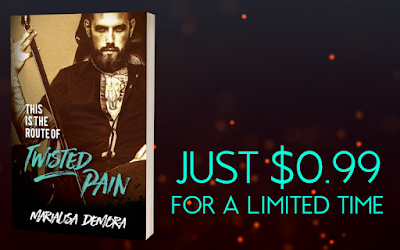 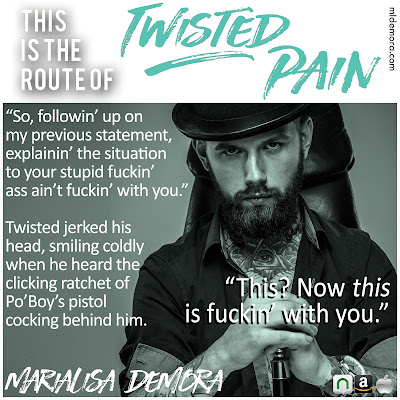 
Well, that didn’t go exactly as planned. Twisted didn’t have time for anything past the single thought before his head whipped to the side again. Blood sprayed in a fan across the face of the man with a fist in his hair, holding his head up. Twisted watched as the dead man licked his lips, then gathered enough saliva to spit to the side. Points for not hawkin’ in my face.
Probing with his tongue, Twisted found the split in his cheek flooding his mouth with blood. Lemme show you how it’s done. Biding his time, he let the bitter fluid fill his mouth, holding still until the man leaned deep, putting his face right in front of Twisted, getting ready to shout at him again, no doubt. The problem was, the guy was too close. Got close, stayed close, put himself in harm’s way by staying within reach.
Stupid. He should have done things differently. Should have had a soldier holding Twisted from behind. Should have made sure the bonds hadn’t slipped. Should have checked more than the obvious places for weapons. Dead man, he thought, just before he spat a mouthful of blood into the man’s eyes, knowing the mixture of blood and saliva would burn like a motherfucker.
Twisted rolled, sacrificing his scalp to gain distance while he shoved a hand into his front pocket, coming out with a small pen. With a flick of his wrist, the concealed blade popped into place. He swept his keys from the ground where they were knocked during the initial scuffle, fingers folding around what looked like a cute kitty face keychain, now revealed to be a deadly addition to bare-fisted fighting. Coming up from the ground, he threw himself at the lone man he’d identified as a danger, the only one who hadn’t holstered his weapon while Twisted was kneeling on the ground.
Sweeping right to left, the thin blade bit through the man’s face, striated muscle visible through the hole gaping in its wake. Not sure if that would keep this guy clear, he followed up with a violent punch to the throat, knowing his kitty’s work was done when the guy stopped making sounds. The keys went into his pocket, and in a continuance of the same motion, Twisted stripped the gun from the man’s fingers. He turned, seeing no other weapons yet bared. Flat-footed enemies, he thought, lifting his chin as he stared into Gollum’s eyes.
Shouts and yells rose around them, Twisted’s delayed backup flooding from the woods surrounding the clearing he’d seemed destined to die in today. The men at Gollum’s back countered finally, pulling their weapons. Bullets whistled past with sounds of pain filling the air. Meaty thuds of fists. High, wavering screams. Still the two men stood, locked in a stare.
On his side of the standoff, Twisted fought the urge to draw it out. Make him pay. That was what his blood chanted as it flowed fast through his veins. Make him pay. Shouldn’t have cut her hair. Make him pay. Shouldn’t have taken what she offered, knowing he didn’t have anything to trade. Make him pay. Her tears as she told Twisted what had happened, tears as he held her. Buckets of fucking tears choking her voice, rusting his heart, staining the time Twisted had with her. Make him pay.
“Do it! Fuckin’ do it!” Gollum screamed suddenly, bending at the waist, mouth open, cords in his neck straining. Fists clenched into impotent weapons with no nearby body upon which to impress their hatred, Penny would be forever safe from him. “Fuckin’ do it!”
“Since you asked so nicely.” Twisted wasn’t even aware he spoke aloud until he heard Po’Boy laugh beside him. Sighting down the barrel, grip unfamiliar in his hand, Twisted focused on the still-screaming mouth in the face in front of him. 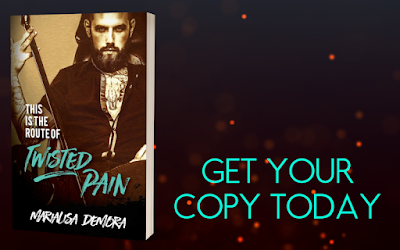 Raised in the south, MariaLisa deMora learned about the magic of books at an early age. Every summer, with the help of a gracious librarian who did not believe in age-restricted stacks, she would spend hours in the local library, devouring books of every genre. Self-described as a book-a-holic, she says “I always loved to read, then I discovered writing, and I adored that, too. For reading … if nothing else is available, I’ve been known to read the back of the cereal box.” She still reads voraciously, and always has a few books going in paperback, hardback, or on devices.
deMora has penned a variety of stories, with several established series as well as standalones in romance and dark suspense. Her website is filled with links and information, as well as extras like character interviews, playlists, poetry, and trailer videos!

Posted by Lynn's Romance Enthusiasm at 9:24 AM